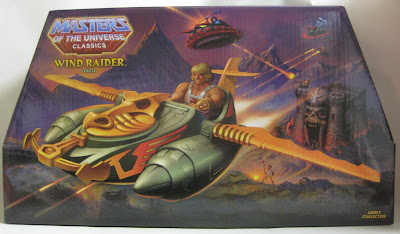 This may well be the centerpiece of Mattel’s 2011 Masters of the Universe Classics offerings. We, the fans, have been waiting since the line’s inception to see any of the vehicles from the vintage toys updated.

We were teased a couple of years ago with a mock-up/prototype of the Battle Ram that the Four Horsemen created for San Diego Comic Con. It looked fantastic and made everybody feel pretty sure that not only would we be getting a vehicle soon, but that it would probably be a Battle Ram. Reasonable, right? But nothing about MattyCollector is reasonable (just look at the Star Sisters), so of course we got the Wind Raider to finish off 2011.

Not that I’m complaining – to me the Wind Raider is the most iconic vehicle from MOTU history. I’m more than happy to have it. 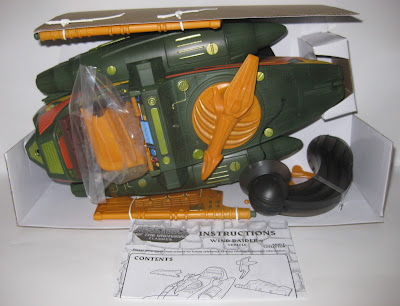 First Glance: I absolutely love this packaging. I normally prefer window boxes for pretty much anything, but for some reason I’m good with this enclosed box. 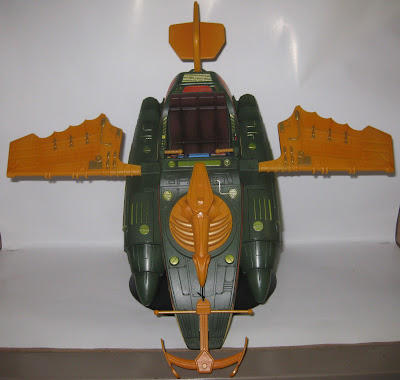 Sculpt: The Wind Raider comes mostly assembled. And it is large. It was obvious that this thing was going to be big simply judging from the figures in the line, but man. It’s big.
The Wind Raider is also very detailed. Rather than use stickers for control panels and insignias, the Four Horsemen sculpted every detail into this thing, and didn’t skimp a bit. Every dial, gauge, and logo is a part of the vehicle and is thoroughly recreated from the original’s sticker sheets. 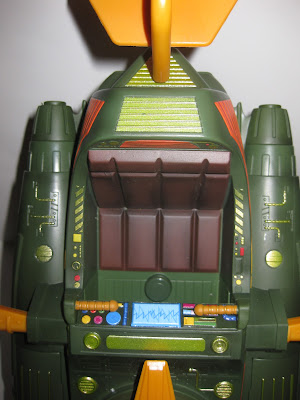 The cockpit features a sculpted seat and will fit most MOTUC figures just fine. I stuck a Palace Guard in there (the one with Icarius’ Val Kilmer head because he feels the need… the need for speed – thanks, Evil for that excellent suggestion) and he fits great, even with all of his armor on. There are grips on the control panel for steering and they are made of a softer plastic so they can be manipulated into the figures’ hands. I didn’t actually do this because I was afraid they might break off or something, but you are more than welcome to with your Wind Raider. I’m not saying it won’t work, I’m just saying I didn’t trust it to work. 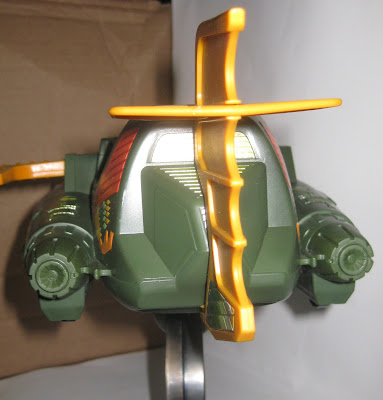 The wings and tail fin are made of a softer plastic and are just as detailed as the body. The wings plug in very well, but I’m afraid they’re going to end up sagging over time due to their weight. The hexes that the wings plug into rotate, so you can position the wings however you like. The tail fin/rudder piece is also a soft plastic. It took a little fiddling to get it in place and the peg on top got a little crushed in the process. It’s fine, but it was a bit of a pain. This piece is clearly intended to be moved side-to-side, but the mashed-up peg on mine means I won’t be doing a lot of that. Not a big deal. I wouldn’t have anyway. 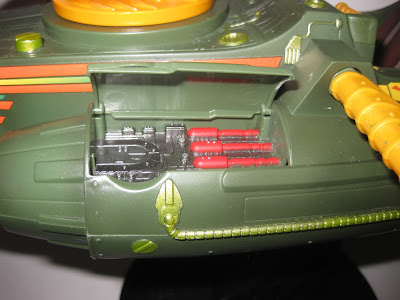 There is a hatch on either side of the Wind Raider’s body. These each open to reveal some wiring and stuff, as well as what appear to be some sculpted-in missiles. These add a little more depth to the vehicle and remind me how much I like hatches. 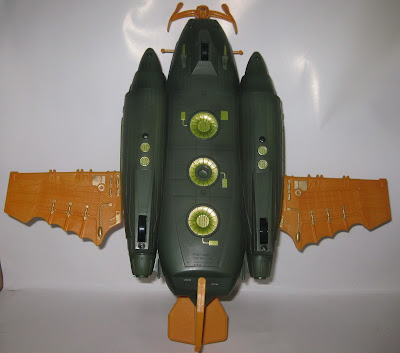 There are wheels underneath the vehicle that roll nicely. The bottom isn’t quite as thoroughly detailed as the rest of the Wind Raider, but it still looks good. 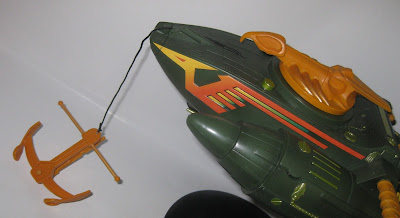 The front of the vehicle features a functioning grappling hook that really looks more like an anchor. You press a button to activate the spring-loaded firing mechanism (which is pretty powerful) and the anchor shoots out, trailing a line as it goes. Retracting the line and anchor is a bit tricky, but pretty ingenious. Rather than just having that large yellow dragon immobile on the hood of the Wind Raider, you can turn it all you like without messing with the firing mechanism or the line. But if you want to wind the line back in, simply pull the dragon thing up a bit and then turn it until all the line is back inside. Then plug the anchor back into place. 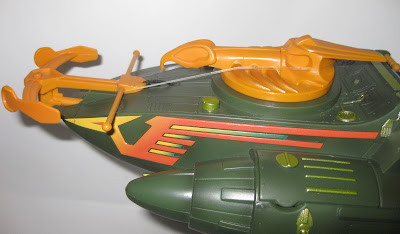 Unfortunately, my Wind Raider launches the anchor on its own. It just won’t stay plugged into the socket, so I had to use a clear rubber band – of which I have many thousands saved for just such an occasion – to attach the anchor to the dragon thing. Pretty disappointing, but not a total failure.

Design: The colors on this thing match the original precisely. The insignias on the body are great shades of yellow and gold that contrast nicely with the olive green. The wings and tail fin have gold detailing on portions so they don’t look bland. But that control panel is where the Wind Raider really shines. It’s just beautiful to see this much effort put into something. We all know that stickers peel off eventually and the Horsemen do, too.

The actual application of the paint decos on mine is pretty much flawless. No colors where they shouldn’t be or splotching or anything. 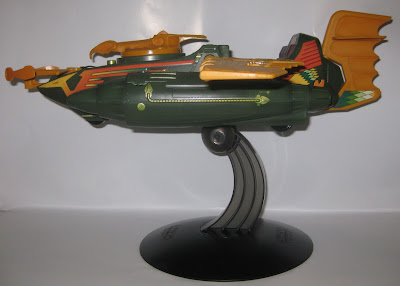 Accessories: The Wind Raider comes with a stand, which impresses the heck out of me. Not only that, it’s a great stand. It has the MOTUC logo stamped on the base and there is a joint at the top that lets you position the vehicle in different ways. Granted, I’ll be hanging mine from the ceiling, but I really do think the stand is wonderful. 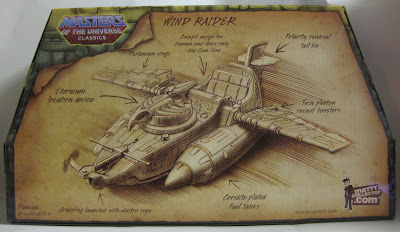 Packaging: The art on the box is beautiful. It’s done by one of the original Masters of the Universe artists (whose name escapes me) and It sets a new standard for what kind of packaging I expect from these toys. I found the blueprints on the back to be a little stupid. Well, not the blueprints themselves, but the written descriptions of the parts. I don’t know if they’re from the original or if some goofball at Mattel (ToyGuru) came up with that stuff, but it just sounds dumb.

The only flaw here is that I was hoping for some kind of bio for the vehicle.

“When Duncan was first promoted to the position of Man-At-Arms for King Randor, he saw the need to cover vast distances faster than Eternian steeds would ever be able to. Not just for the sake of convenience, but to better protect the borders of the kingdom…”
Something like that.

Overall: For $45 the Wind Raider is a fucking steal. Even with the flaws mine has I feel like I got a HUGE bargain on this thing. A comparably-sized vehicle from the Star Wars line would run sixty dollars or more. Of course, it would have lights and sounds too, but still. You get my point. I guess the truth is that the Wind Raider costs about what it should cost and that is an amazing accomplishment for Matty.

I can’t in good conscience give it a perfect score thanks to the anchor, but this vehicle is truly fantastic. It’s one of the best things to come out of the Masters of the Universe Classics line. And really, all of them may not have the flawed firing mechanism that mine does. I recommend you buy this one if you can.
Posted by Phantom Troublemaker at 11:00:00 AM

Email ThisBlogThis!Share to TwitterShare to FacebookShare to Pinterest
Labels: masters of the universe classics, mattel, toys