Toy Review – Freddy Krueger from A Nightmare on Elm Street 4: The Dream Master By NECA

I haven’t bought a whole lot of horror toys in the last few years.

They used to be a staple of my collection and while I still have a large amount of wall space in the Man Room dedicated to more vampires, demons, and slashers than you could shake a machete at; I just don’t buy them all that often. Partially because I have toys of almost every major horror icon I could want, but also because the licenses just aren’t as prevalent as they were in the early part of the last decade. Horror isn’t big business right now.


Oh, wow. I just had a brilliant idea for an article. Check back – there will be an amazing new horror toy post within the next week or two.

But until the fantastic idea I just had comes to fruition, we’ll have to make do with the few and far between releases we have now, most of which are variations on characters we already own such as today’s Freddy Krueger or the upcoming Ash figures from Evil Dead 2 (although technically those are new since there have never been any Evil Dead 2 action figures).

The third and fourth entries in the A Nightmare on Elm Street franchise are my favorites. I know most people consider the third movie to be the point where things went off the rails, but if you’ve been reading Needless Things for any amount of time you know my taste can be… let’s just say interesting. But I really dig the Dream Master and I’ve always felt the end where (SPOILER ALERT!) Freddy gets torn apart from the inside by the souls of his victims is one of the best visuals of the whole series. And now we have a toy of it. 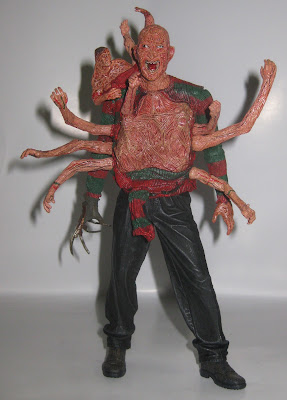 First Glance: I wasn’t totally convinced I was going to buy this particular Freddy until I saw it in the store. Nobody has topped my original McFarlane Freddy Krueger yet (well, not counting the Matchbox transforming Freddy) and I’ve never been very big on variants of characters I already own. But this freakish figure had me the moment I saw it on the peg. 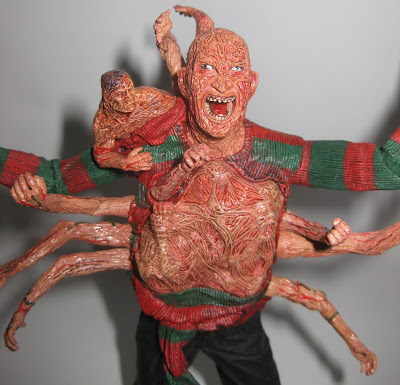 Sculpt: Posability has never been a selling point of horror toys. McFarlane Toys’ Movie Maniacs were lucky to have more than four points of articulation and sometimes those didn’t make sense anyway. I guess maybe articulation was a bit of a factor when NECA got some of the licenses, as they tended to put in things like ball-jointed shoulders and necks, as well as swivel wrists that all blended into the figures’ aesthetics. But overall their products weren’t enough better to make me buy new versions.

But now NECA is getting all creative and doing things that haven’t been done before and this Freddy is one of the finest examples of that. He has a massive amount of articulation. He has swivels at the ankles, wrists, and waist as well as ball joints at the neck, elbows, and shoulders. And when I say shoulders, I mean all of his shoulders. All of those tiny little arms sticking out of his torso are jointed. It’s ridiculous.

I am on record as being opposed to the stupid way NECA does feet. They put a swivel at the ankle and make the feet out of rubber, which is one of the stupidest fucking examples of toy engineering I have ever seen in my life. I cannot understand this method. I have a Tall Man that cannot stand without leaning on his evil little devil midget thanks to this moronic practice. Freddy has the same construction, but is balanced quite a bit differently than Mr. Scrimm so I’m hoping maybe I won’t have to lean this Freddy on another Freddy just to keep him upright.

The actual sculpt is beautiful. Or disgusting. Whatever. Freddy’s skin is gnarly and gross like it should be. His face looks dismayed and furious and is a pretty amazing example of what sculptors are capable of. All of the little arms and faces and whatnot have lots of nice detail and the points where they attach to the main body are not all that distracting. NECA’s sculptors did a great job of making those poseable parts blend with the figure rather than stick out like they could have. 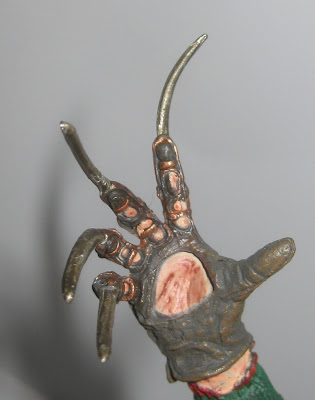 The glove is one of the best I’ve seen. From the plating to the blades to the hole in the palm showing the exposed, burned flesh – this is a beautiful slasher hand.

Freddy’s clothing looks awesome. The textures of his sweater and pants look tremendous; a noticeable improvement over the already pretty great McFarlane Freddy. All of the torn bits of the sweater are just wonderful. His boots look really great as well. 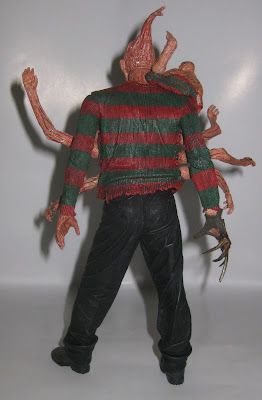 Design: Freddy’s skin is that repulsive pink-red-purple mix that we’ve all come to know and love. The different applications of color go along with the texture of his skin and burns rather than just being random washes. His face is detailed a little more precisely than the rest, but his eyes are just a bit off. Nothing that sticks out too badly – I didn’t even catch it until I was looking at my pictures.

Freddy’s clothing looks great, with nice attention to damage and wear. The stripes on the sweater are precise and match all the way around, even the sleeves. The pants and boots aren’t overdone – they’re not covered with blood or some other kind of artificial spattering – but they look worn and old. Like clothing you’d find on a dead guy.

Accessories: Mr. Krueger doesn’t come with any accessories, but that’s forgivable what with all of the little arms and stuff. 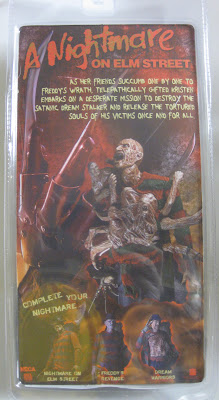 Packaging: A crappy clamshell you have to use scissors to open. Blech. But the art is nice and credits are given on the back now. 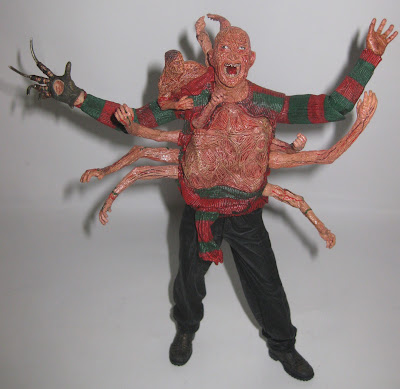 Overall: I dig it. This particular Freddy Krueger may not be a crucial addition to your collection, but I’m more than happy to have him in mine. Especially since my regular Freddy from McFarlane is on tour with his band right now. More on that later… 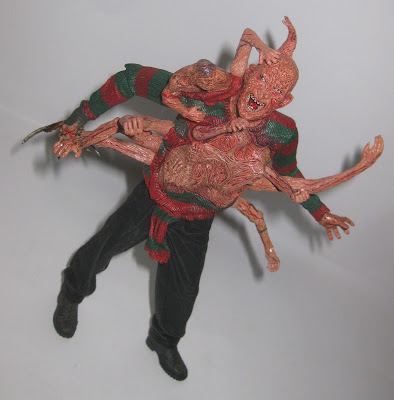 He’s at Toys R Us or online for around fifteen bucks. I say buy him if you like weird variations. Don’t if you hate the fourth Freddy movie.
Posted by Phantom Troublemaker at 11:00:00 AM