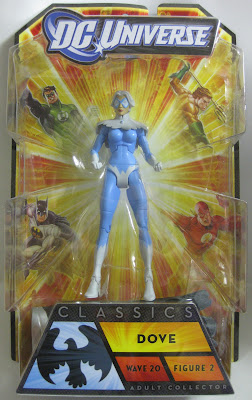 So Dawn Granger actually replaced Don Hall as Dove back in the eighties, but I don’t know much of anything about that, so we’ll pick up at the end of Blackest Night.


Hank Hall was back and Deadman was way into Dove (the girl one, not the dead dude). Boston Brand was a huge part of Brightest Day – the follow-up to Blackest Night – and initially the story of Deadman hunting down the white ring and trying to divine its purpose while dealing with his resurrection and a superhero love interest was really good. But there were also eight billion other storylines going on in Brightest Day and some of them were mind-bogglingly boring (Aqualad) and some were plain incomprehensible (Hawkworld). So with Deadman and Hawk and Dove featuring less and less as the series progressed I stopped getting it.

I did buy the final issue though and it was one of the dumbest things I have ever read. No, wait. That would be Search For Swamp Thing. Brightest Day #378 was only mildly stupid in comparison.

But luckily for us Hawk and Dove fans, the pair showed up in Gail Simone’s newly rebooted Birds of Prey, which was an excellent book. Simone got the characters perfectly and used them well throughout the series.

Now we’ve got the (recently cancelled) New 52 Hawk and Dove by Sterling Gates and The Rob Liefeld.

I am familiar with the name Sterling Gates, but not with any specific work.

The Rob Liefeld, on the other hand, everybody is familiar with.

I am not going to sit here and talk shit about Liefeld because that’s what everybody does. I absolutely loved the guy’s work on New Mutants and X-Force back in the day and even followed Youngblood for a while. I think it’s funny that people pick on Liefeld for not understanding human anatomy but absolutely worship Richard Corben. I say good for Liefeld that he’s still plugging away, doing what he loves. I admire that a lot. Anybody that can commit themselves to something gets a lot of credit in my book.

But I don’t like Liefeld’s art now. And as much as I do like Hawk and Dove, I don’t want to see them rendered in that Liefeldian manner. From what I hear the comic isn’t that great anyway and the fact that it’s being cancelled kind of lends that rumor some credence.

But at least we’ve got toys! I’m sure some folks would prefer it if this Dove were Don Hall, but I’m fine with Ms. Granger. She’s the one I am more in tune with. 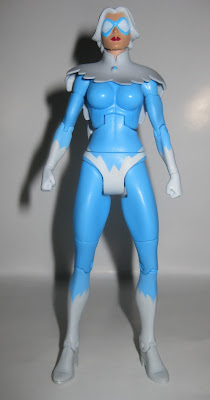 First Glance: Like Hawk, Dove appeared to be a purer white in the production photos. I’m good with the grey. She sure does look tiny in this blister though. 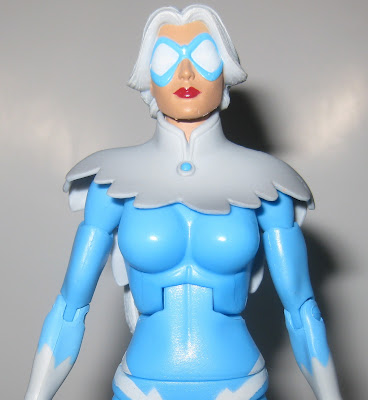 Sculpt: Dove is, of course, the basic DCUC female buck. I’ve got to say, the too-skinny arms and abdomen work well for this figure. The articulation is standard and my figure is in good shape. No stuck joints or overly loose ones.

I’m not sure I agree with the high heels for Dove. I mean, they’re not stilettos or anything, but I think flat feet would have been better. Though I will admit that I can’t remember at the moment what her footwear is in the comics.

The head looks great. The pony tail hangs fairly well and doesn’t have that look where it’s just sticking out of the back of the head. The face looks just like Dawn Granger from the comics and the mask has a nice depth and shape.

The little shoulder deal is nice. It’s made of a flexible material so it doesn’t interfere with Dove’s arm movement and the shape is spot-on. The little jewel or button or whatever that is on the front looks good as well. 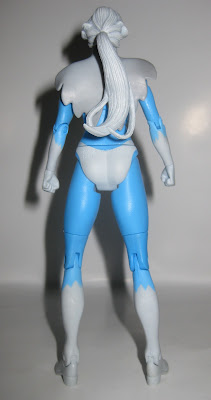 Design: The paint is solid and while the grey is almost a little too thinly applied Dove does look pretty good. And most importantly, her shades of grey match Hawk’s pretty well.

The head is great. The red lipstick really contrast everything else nicely and the hair and eyes are a bright white that looks really good. This is another reason I’m glad that Mattel went with grey for the costumes. The eyes on both figures wouldn’t have stood out nearly as well. 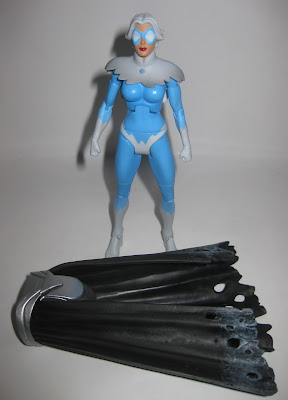 Accessories: Dove comes with Nekron’s lower torso and jacket bottom. The parts of Nekron I own look really cool and I honestly wouldn’t mind putting him together. But he really should have his scythe. 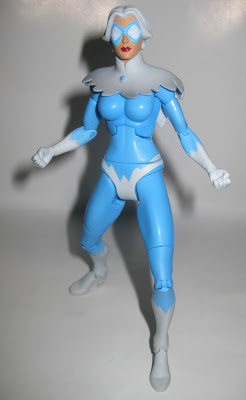 Overall: Just like with Hawk, this is a very competently produced figure. Not much I would change outside of a bit more articulation.

I’m thrilled that the final two DCUC figures I purchased were so solid. It gives me a bit more hope for Club Infinite Earths, which I had been sort of regretting subscribing to for a while.
Be sure and check back here in April and I’ll let you know how that goes. 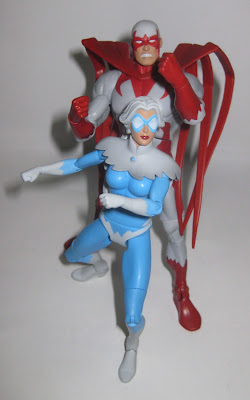