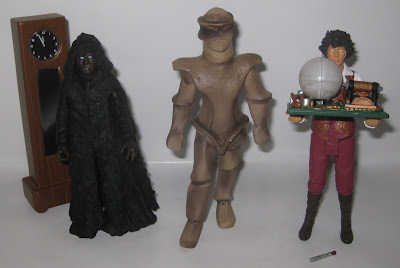 This is honestly kind of a weird set.

If I were to put together a set of figures from Tom Baker’s penultimate Doctor Who story, I can think of several different combinations that don’t resemble this one at all. I get wanting to put the Doctor in every set. I wouldn’t do it, but I understand the logic. My ideal “Keeper of Traken” set (basing it off of the three figures and two accessories in this one) would have included the Melkur, Nyssa, and Adric. Three things we don’t already have. Not sure what I would have done for accessories. Maybe flowers for Melkur.


But I do get wanting to re-use parts, so the decayed Master variation (this one is different from the “Deadly Assassin” one) is okay, especially since his TARDIS is included. Well, technically two versions of the Master’s TARDIS with the grandfather clock and the Melkur. So given that I guess I’d stick Nyssa in there rather than our Time Lord hero.

But CO went with a new Tom Baker that has a few new parts. I’m not sure how much demand there really was for a 4th Doctor minus his jacket and scarf, but at least it’s not a direct re-release.

As far as the story goes I think it’s a great one. “Keeper of Traken” is the first portion of the trilogy of stories that sees Peter Davison take over the role of our favorite Time Lord from the legendary Tom Baker. “Keeper” is also the debut of Anthony Ainley as the Master. Now that I think about it, it would have been pretty easy to stick the existing Ainley head on a new body and make a Tremas (the man whose body the Master steals). 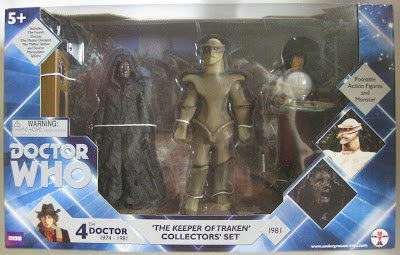 First Glance: Awesome window box. Considering all the goodies in there, I’d say this is one of the more reasonably priced Classic Doctor Who sets. 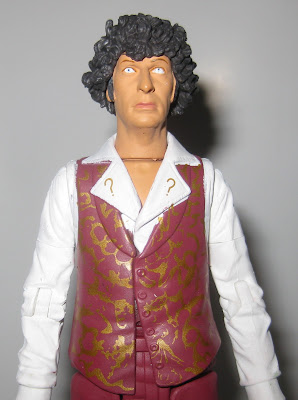 Sculpt: Once again, I don’t necessarily need another Tom Baker, but this one is at least different enough to be neat. He has a new vest and arms and really does stand out from the other 472 Tom Bakers. The biggest difference, however, is that he has the new shoulder joints that more recent Doctor Who releases are sporting. This means they are basically ball joint analogs and the figure has a lot more posability. The head sculpt has been used before and is very nice. The shirt sleeves are new and look great – lots of details and folds and stuff. This isn’t going to be anybody’s first choice for a 4th Doctor figure, but CO did do a good job on him. 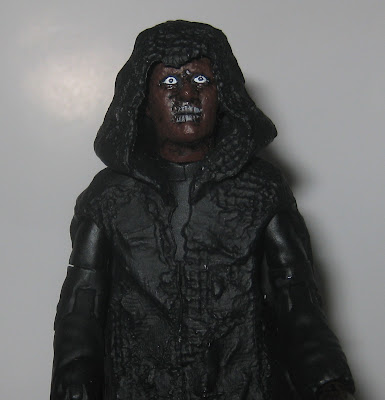 The Master in this set is essentially the same as the single-carded Deadly Assassin version. The head is different, as it should be. The other one had a more grotesque face that reflected the heavier makeup and googly eyes used in the older story. This one looks more like a painted face, almost like one of the villains from The Mighty Boosh. The older figure looks better, but I actually prefer this one because it is the one I remember scaring the shit out of me when I was a kid. The body has the standard CO articulation, but it’s pretty much meaningless because of the robe. Which does look great, by the way. 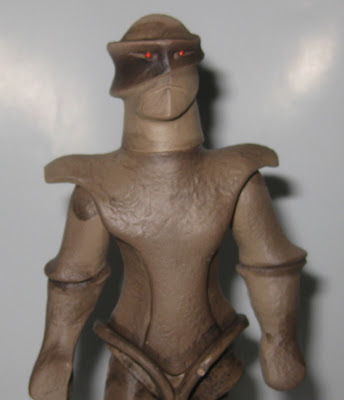 The Melkur is about as perfect as you could expect. It’s actually made out of a hollow vinyl-type material that makes the figure look different and provides a unique texture. The articulation is limited, but it’s not like Melkur did a bunch of Venusian karate or anything. It’s jointed at the hips, shoulders, and head. Good enough. The non-functioning joints and texture of the figure accurately reflect what we saw in the story.

Design: Melkur looks great. There are a few layers of paint apps that look all rocky and textured. The face – such as it is – looks good and I’ve got to say I think if the old Doctor Who production team had made a miniature Melkur it might not look this good. There is a spot of weird paint on the left hip, but it doesn't really bother me.

The Doctor has one of the better paint jobs from the line. The face and hair are about as tight and accurate as it gets. The rest of the clothing is pretty basic except for the vest. It looks amazing. There’s just the one color of detail – gold – but it looks great. The lines are clean and precise and just looks like the sort of fine embroidery you’d expect a Time Lord to be sporting. 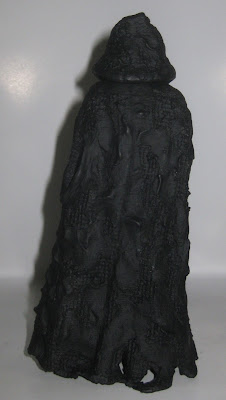 The Master is mostly black. A nice, shaded black, but black. His hands and face are where the detail is. He has nasty, rotten little hands that have an absolutely off-putting paint job. They’re infinitely more appealing than the Master’s face, though. Because of this putrid face this is one of the more revolting toys I own. I think it’s the teeth. He’s just totally nightmarish, just like on the show.

Accessories: Included in the set are the Doctor’s sonic screwdriver, the source manipulator sphere, and the Master’s TARDIS disguised as a grandfather clock. The sonic is as basic as basic gets – a bit of red paint on the tip of the standard 3rd Doctor version. 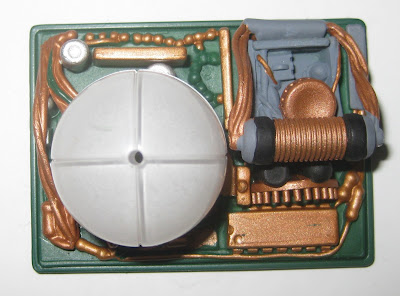 The source manipulator sphere is pretty accurate for a ball and a bunch of electrical doo-dads. The sculpt is great, but the paint might be a little more simple than I would like. It looks okay, but such a wacky and intricate device could look a bit more exciting.

The Master’s TARDIS is a grandfather clock. It’s made of the same material as the Melkur. It looks a little cheap, but it isn’t terrible. I’m just happy to have the version of the Master’s TARDIS I remember most fondly. 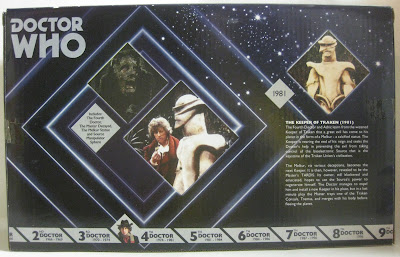 Packaging: The window box for this set is truly fantastic. It looks old-school and has the most awesome graphics and colors. The design is very much that of a 70’s-era toy, but doesn’t feel stale or uninteresting. I was almost tempted to just leave the toys inside, but I couldn’t let that Melkur go unopened. There is a sort of diorama inside, but it isn’t as exciting as the Axon ship so I tossed it. 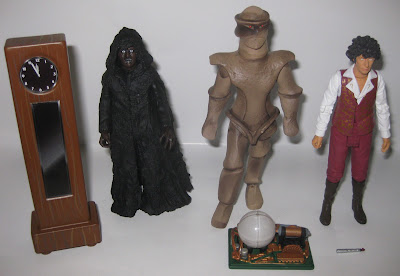 Overall: Despite a Doctor and Master very similar to ones I already own I like this set a lot. It is a good value compared to some other Classic Doctor Who sets and represents the story well.

I’m kind of torn on Character Options’ practices with these Classic sets. While I get wanting to put major characters in, you can’t tell me anyone would have preferred the Doctor or the Master over Nyssa. It’s hard to imagine anybody buying this as their only Doctor Who set. But still, it’s pretty neat. 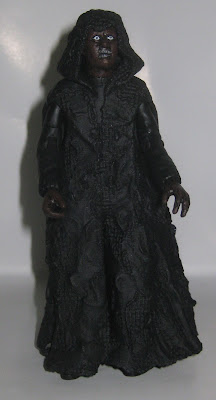