Toy Review – Classic Doctor Who: Image of the Fendahl By Underground Toys 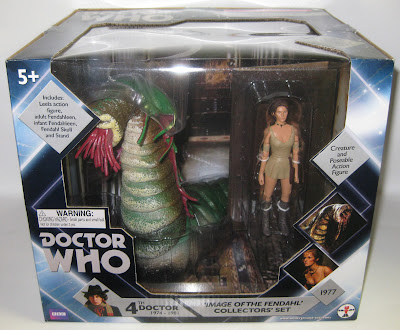 Hot damn! It’s a Doctor Who set without a figure of the Doctor!

I wouldn’t have said Image of the Fendahl was a very high-profile Doctor Who story, but I’m going purely off of the ones that stand out in my mind from when I was a kid. And it does have a lot of things to recommend it – an evil skull, a Cthulu-looking monster, a cult, wacky villagers, and Louise Jameson - sweet, sweet Louise Jameson - as Leela.

The story starts with some scientists who are doing some stuff they shouldn’t be doing, as scientists tend to do. They’re resonating theta waves through the ionosphere or some such technobabble and its pissing off some ancient monster thing. Somehow or other it uses the evil skull (complete with pentagram) to possess a scientist lady and make her do bad stuff. Eventually evil Cthulu worms cross over into our world and everything gets crazy-go-nuts.

Also, the Doctor and Leela show up and are initially mistrusted but end up saving the day. Which is pretty much how these things always work out.

I know that’s a lousy synopsis, but when I went back to watch the story the other day the third episode crapped out on me and the fourth wouldn’t play at all. That’s what I get for buying bootleg DVDs at Dragon*Con. But I know the discs worked previously because I don’t remember being pissed off and I watched every episode on this Leela collection to the point where I put together an outline for a post about Leela episodes.

Of note is the fact that we were watching the episodes at the request of Lil’ Troublemaker, who was playing with the set while I was doing taxes or something. He is no fan of the big Fendahleen monster but wanted to see the episode anyway. That’s my boy.

He hung in admirably through the admittedly slow first two episodes, but he couldn’t wait to see the big Fendahleen, which apparently doesn’t show up until late in the third episode or maybe even in the fourth.

But either way, he still enjoyed playing with the toys. He can’t seem to decide if Tom Baker or Matt Smith is his favorite Doctor. It’ll probably end up being Baker if only because more of his episodes are kid-friendly. There are a lot of modern Who stories that I won’t be letting him watch any time soon. 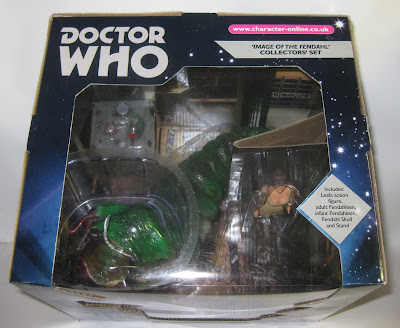 First Glance: This is a truly beautiful set. The variety of the toys inside as well as the packaging make it really stand out among the other Classic releases and that’s saying something. Overall the line is fairly impressive to look at already. 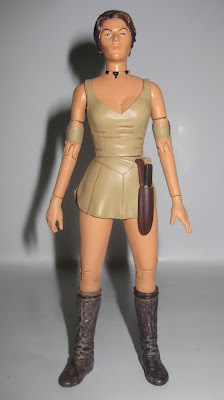 Sculpt: Leela is very well done and certainly different enough from the Face of Evil version I already own that I don’t feel too bad about owning another. The basic body is the same as that one, but the head and clothing are new. The articulation is very good, with swivels at the neck, biceps, waist, wrists and boot tops; pivoting elbows and knees; and swivel/pivot shoulders (which means they are basically like ball joints). The hips are a bit odd. They actually are ball-jointed, but are somewhat restricted. The socket is somewhat tight, so the range of movement isn’t as much as you would have with a standard ball joint. It is good though and I prefer it to the hinged hips. 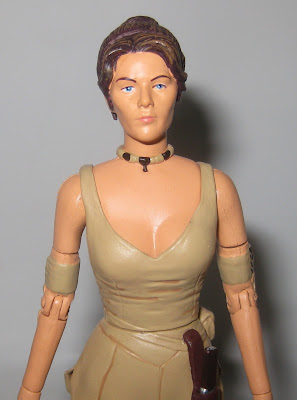 Leela’s head/face/hair are excellent. The face is dead-on Louise Jameson and the hair looks very much like what you see in the episode. I prefer Leela with her hair down – and most women, for that matter – but this sculpt does look cool. The hair is actually a separate piece, so rather than being pieces stuck to the head there are actually strands hanging off the back of her neck. It looks very good.

The clothing is fairly accurate to the story. This costume is much less detailed than the darker skins, but still a good look. The skirt isn’t slit as high as it was in the show, which is weird because it does restrict the figure’s movement somewhat. The stitching and shape of the costume is good. The sheath is functional and holds Leela’s knife, but the belt is a bit iffy. It would look a lot better if it were a separate piece. 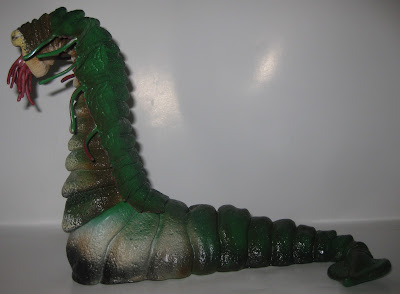 The adult Fendahleen is fantastic. For as large as it is – and this is the largest non-TARDIS item on my Doctor Who shelf – there is still a whole lot of detail. From the scales to the hood to the tentacle things. It all looks very good. The only articulation is a swivel right at the end of the tail. It’s essentially useless and is probably more a construction necessity than an intended point of articulation. But either way, this monster looks great and is very large. It gives me hope we might get something from Invasion of the Dinosaurs some day. 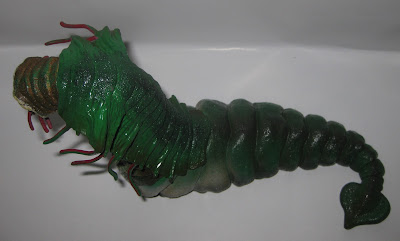 Design: The mature Fendahleen has a very nice paint job that is accurate to the story. The colors all blend together very well and do a good job of obscuring assembly points. None of the paint from the tentacles bleeds into the hood or the mouth, which impresses me for some reason. 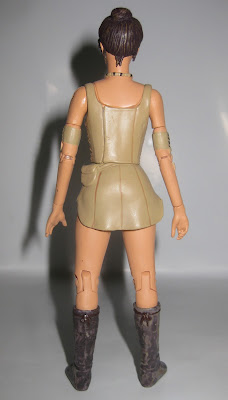 I have to address something here. I might have been a little too kind to a lot of the Doctor Who toys I’ve reviewed. I feel like I’m pretty ruthless with Mattel and fairly forgiving with Character Options because I love Doctor Who a whole heck of a lot more than I love Masters of the Universe or DC Comics. More than I love most of my nerd passions. So I kind of let them get away with things that I would bitch endlessly about if it were Mattel.

Sorry. I’ve been known to have a bias or two in my time and it’s not likely to end now.

So Leela looks mostly good. The head is solid, with precise paint apps and just enough color for her to look feminine without looking made up. The costume is solid except for the belt being a bit off. The boots are very good, as are the armbands.

The problem comes in with the paint smudges that are present on many Doctor Who figures. What I’m talking about is what happens when the paint has not dried before the figure is packaged, so you get that stippled effect on portions. I’ve never mentioned these before – sometimes because I didn’t notice them until later and sometimes because I didn’t feel they were significant enough to mar an otherwise good figure. But it’s something CO really needs to work on. Scaroth had some blotched paint on his hand and Leela has a bit on each hand.

But just standing there on the shelf the figures still look great. 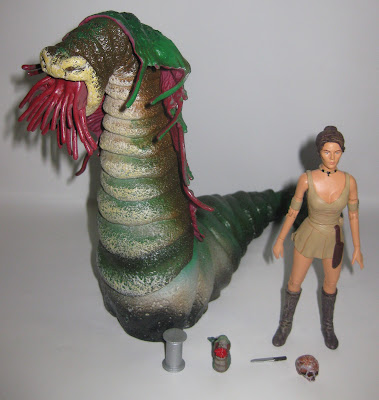 Accessories: The set includes an embryo Fendahleen, Leela’s knife, the evil skull, and a pedestal for the skull. 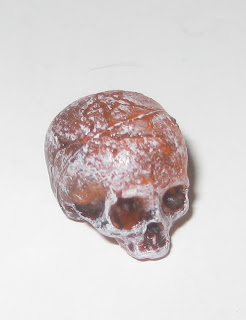 The skull looks fantastic. The sculpt is good and the paint is amazing. It has an off-white coat over the translucent plastic the skull was made from so it appears to glow somewhat under light like the one in the episode. 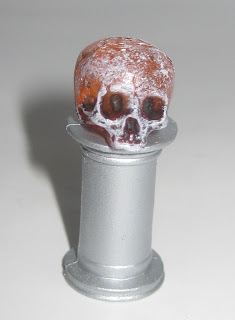 The pedestal is plain, but the skull fits perfectly into the concave top.

Leela’s knife is very basic. She can hold it well and it fits into the sheath. 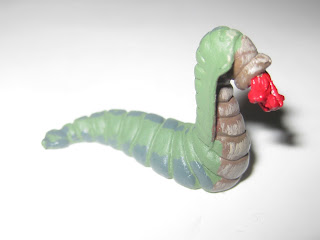 The baby Fendahleen looks neat and is sculpted in a different pose than the adult. This may seem like a minor detail, but it makes it seem like more than just a smaller version of the big toy. The paint on the wee one is just as nice as on the other. 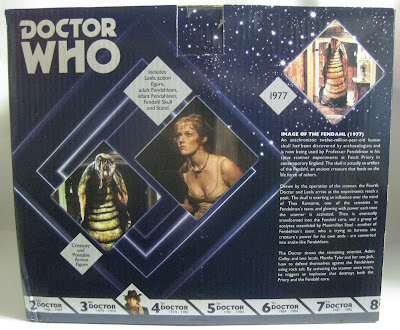 Packaging: This is the best Doctor Who packaging yet. While I am not necessarily a big admirer of packaging (since I throw it all away), this is quite a box. The backdrop is the place the scientists are working out of in the story and there’s even a little table for the accessories to sit on. It could almost be a playset. Well, it actually is a playset if your four-year-old gets a hold of it. If I had more room I probably would have used it for display. 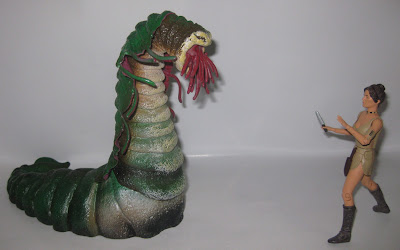 Overall: This is another set that is hardly a must-have but is well worth the money. Yes, the little paint dapples are a problem, but I love Doctor Who. If you do not love Doctor Who, simply knock a point off of my score. Then again, if you don’t you’re probably not considering spending $45 on this set anyway.

As always, my first recommendation is that you buy this from JRsToyWorld.com. If he’s out, BigBad has it for slightly more. 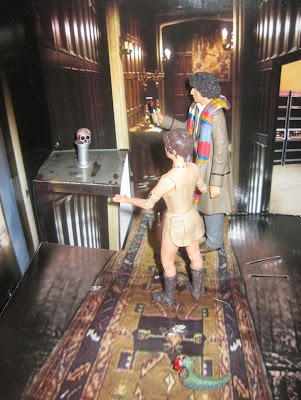