Toy Review – Classic Doctor Who: Enemies of the Third Doctor By Underground Toys 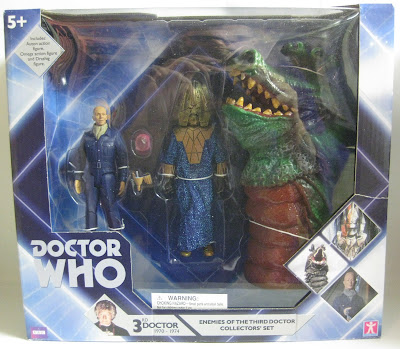 I am in a great position to enjoy this set of Doctor Who figures.

There are a ton of characters and creatures from Classic Doctor Who that I am not familiar with. While I have seen every TV story featuring the eighth, ninth, tenth, and eleventh Doctors; I have seen far less of the first seven. Until recently I had the most exposure to Tom Baker (who I had gotten to watch many Saturday nights when I was a wee lad) and just a bit to the following three Doctors. But the first three were hardly known to me. The only times I had seen them were when they showed up for special episodes like The Five Doctors.

At Dragon*Con 2010 I picked up a DVD set of all the third Doctor’s stories. I watched the whole Jon Pertwee run over the course of a few days and he was my favorite Doctor for about a year. I came back around to Tom Baker afterwards – I always do – but I still think Jon Pertwee is fantastic. And he had some of the most entertaining stories I’ve seen, even if a lot of them were excruciatingly slow.

So having seen all of Pertwee’s stories I knew exactly what each of the characters in this set were. The old-school Auton was fine and the Drashig was great, but I was absolutely thrilled to be getting a figure of Omega, who was on my list of Doctor Who figures that needed to be made. 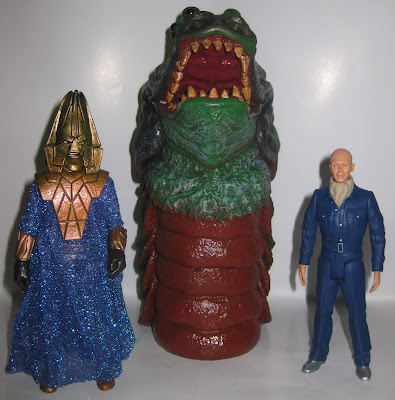 First Glance: It’s a nice window box that forgoes the fancy backdrop of the Fendahl set. That’s just fine. I’m not sure how you would’ve worked these three into a cohesive scene. 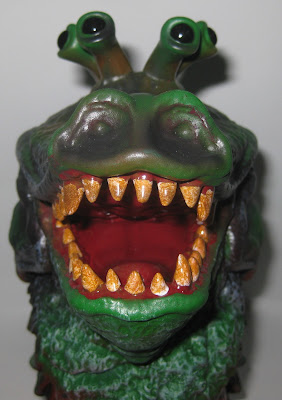 I can’t tell you how thrilling it was first to realize that and then to see Lil’ Troublemaker put it on his hand and growl at a Jon Pertwee figure. It is incredibly awesome that Character Options just went ahead and made this thing a hand puppet. And a good one, at that. 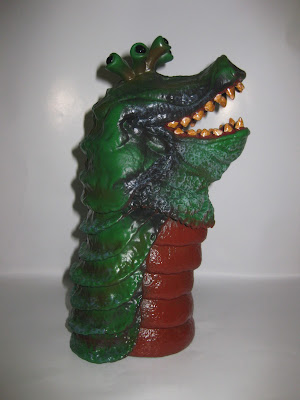 The Drashig is made of a thick, sturdy, yet pliable rubber or soft plastic that holds the sculpt very well but also allows a good bit of movement with the mouth. The sculpt is mostly faithful to the monster as it was seen in Carnival of Monsters, with some minor changes to accommodate the puppet gimmick, which I am totally okay with. The body is a bit thicker and the mouth is a bit wider, but I can’t imagine anybody complaining about that. Otherwise the sculpt is great. The segments on the body have a nice texture, the eye stalks look googly but are sturdy, and the mouth is as fangy as you could want. 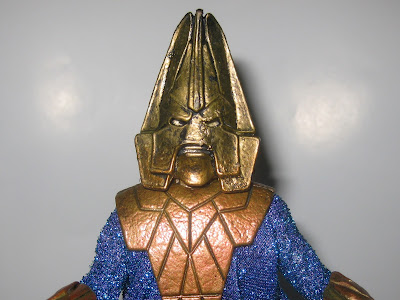 Omega is just as impressive as the Drashig, but in a different way. The figure is accurate to the character’s appearance in The Three Doctors, right down to the sparkly robe and head gimmick. !SPOILER ALERT! – When Omega takes his helmet off, there is nothing beneath, so the figure has a removable head to simulate this. 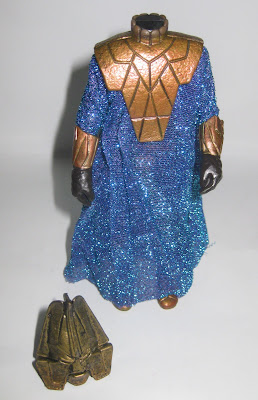 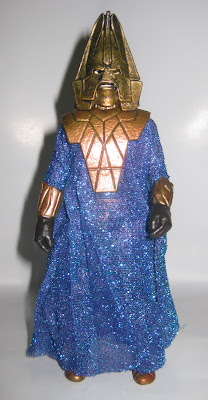 The rest of Omega is just as impressive, as rather than simply stick the hands, head, and robe on an existing body CO sculpted a whole fancy, new body for the exiled Time Lord: 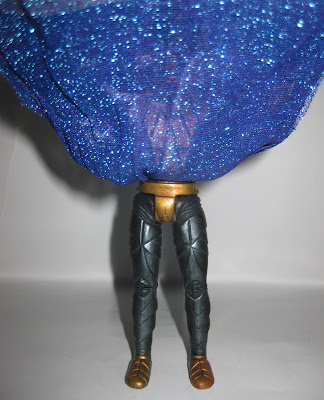 Omega also has great articulation for somebody who basically just stands there. 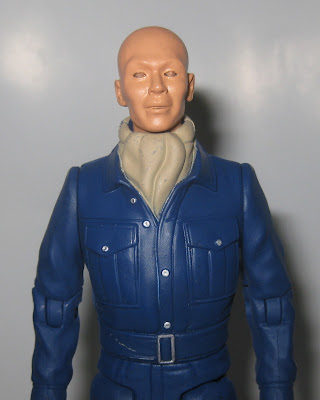 The Auton is definitely the least impressive of this trio, yet still managed to make me happy. I fully expected this plastic creep from Spearhead From Space to be made from the existing Captain Jack Harkness jumpsuit. CO could have gotten away with it and Mattel certainly would have. But this is a new sculpt: 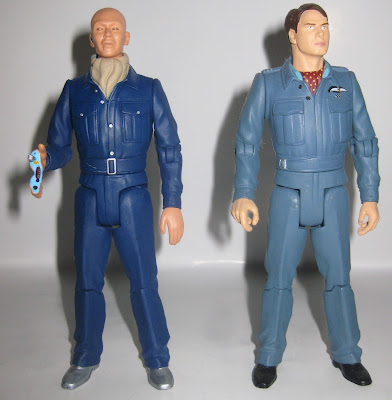 The articulation is pretty basic – no fancy shoulders – but the Autons aren’t exactly all that mobile anyway. The head looks very good – actually much creepier than the Auton figures from Rose – and the jumpsuit has all the little details you’d want. Buttons, zippers, pockets, even some nice texturing. It makes me want a small army of differently dressed Autons. 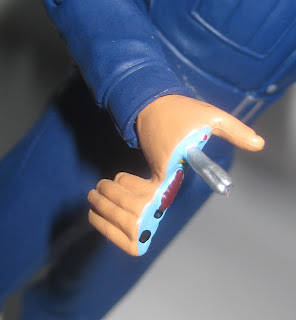 This Auton also comes with an alternate hand with the weapon exposed. 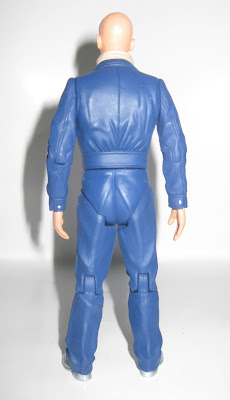 Design: The Auton is fairly simple, but that’s as it should be. The jumpsuit is plain, but the buttons and ascot are detailed nicely. 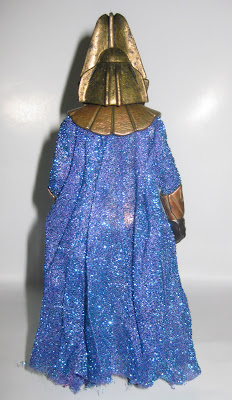 Omega is the standout of this bunch. The detail on his helmet and gauntlets is quite nice, with a subdued gold base and some darker lines that are tightly applied. While his spacesuit - or whatever that is underneath the robes – needn’t have been so detailed, it is. Rather than being all black it features gold portions that match the helmet and gauntlets.

Omega’s robe is a first for the Doctor Who line – soft goods. I am normally not a fan of fabrics in smaller scale figures, but this robe looks awesome. It hangs well on the figure and the iridescent material really makes this guy stand out. I think it was the right decision. Now I’m tempted to say we should get another decayed Master with a fabric shroud. 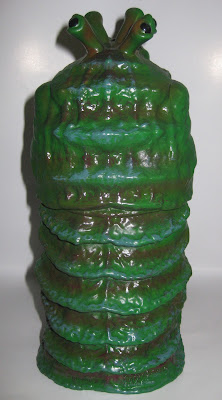 The Drashig also looks fantastic. The paint used has bonded well with the material, as he has already been played with pretty thoroughly and shows no signs of cracking or flaking. The colors are bright and the applications are accurate. 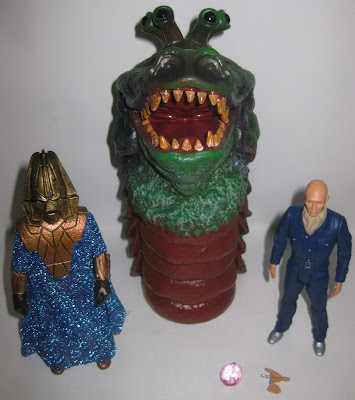 Accessories: The set includes an alternate hand for the Auton and the Nestene Consciousness. I suppose you could consider Omega’s helmet an accessory as well.
The Auton hand is a major step up from the Rose Autons’. The barrel of the weapon is detailed, as is the exposed interior. The hands switch out quite easily and stay firmly in place. 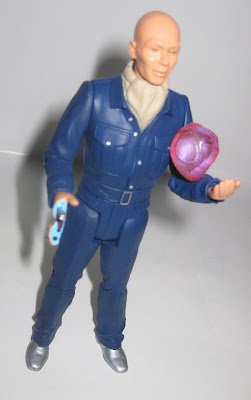 The Nestene Consciousness is about all you could expect out of a lumpy, pink ball of alien evil. I’m glad it’s translucent, though. Translucent is cool. 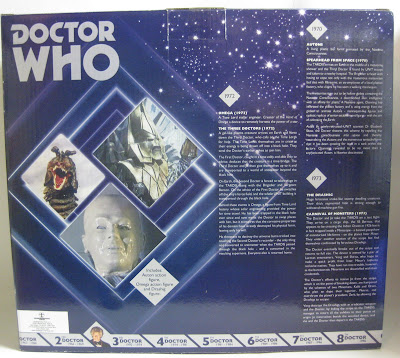 Packaging: While not as fancy as the Image of the Fendahl set, this is still a nice window box. The figures are clearly displayed and the back of the box features biographies and episode synopses. I love the look of these Classic sets lately. 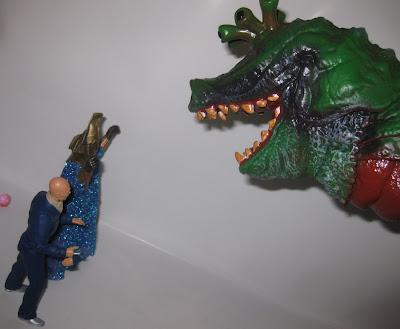 Overall: If you’re a fan of Jon Pertwee as the Doctor then this set is a must-have. Each figure is expertly executed and they are each an exciting addition to your Classic collection.

As always, my first recommendation is that you buy this from JRsToyWorld.com. If he’s out, BigBad has it for slightly more.
Posted by Phantom Troublemaker at 11:00:00 AM