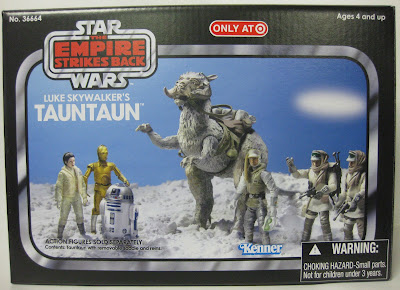 I forgot to mention “Target Exclusive” in the header for the Landspeeder review the other day. Oops. I wonder if I will have fixed it by now.
I got this Vintage Boxed Tauntaun the same day that I did the Landspeeder. It was way too much to spend at once, but I’ve been anxiously awaiting updates to both of these toys for a while. While I attribute most of the Landspeeder’s appeal to nostalgia, I think everybody truly loves a tauntaun. The existence of ThinkGeek.com’s tauntaun sleeping bag should be enough to prove that.
When I was a kid I had a couple of tauntaun toys for Han and Luke to ride around on. The little hatch in the back you stuck their legs in to make it look like they were riding was pretty ingenious, even if the legs molded onto the saddle really didn’t work for the illusion at all. What I did not have was the tauntaun with the slice-open belly. I don’t know if Mom thought it was too gruesome or if owning two tauntauns seemed like enough to her, but the only exposure I had to that particular variant was a buddy of mine that had one.

While it still shocks me a little that a toy was made in the 80’s that simulates evisceration, I was really hoping that this new tauntaun would be the ultimate upgrade and incorporate the feature into a nice-looking toy that was in scale with the figures. You’d think in a market flooded with dismembered zombies, mostly-naked superheroines, and this: 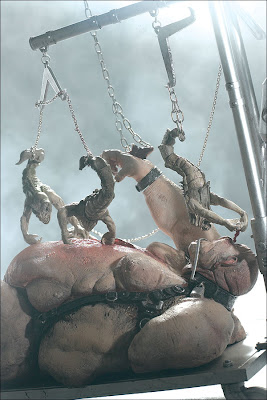 it wouldn’t be too much to think Hasbro would finally give me a tauntaun whose midsection I could gently tuck my Luke Skywalker into (if they ever get around to making a new Hoth Luke). Not so much, it turns out. 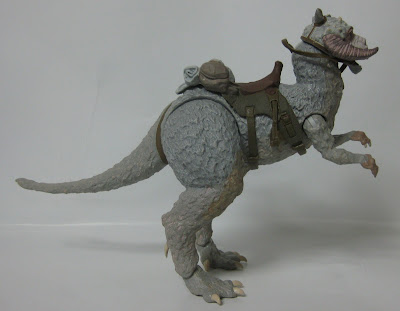 First Glance: The Vintage boxes are so great and such a trigger to the impulse buyer in me. This is really pretty stupid since they all end up in the trash, but whatever. They draw my eye every time. 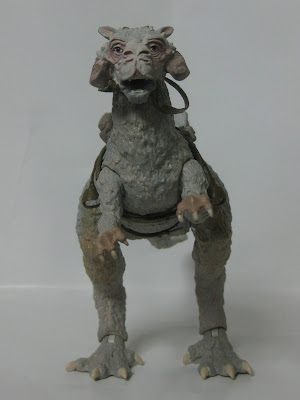 Sculpt: The tauntaun has tremendous articulation. I would’ve been perfectly happy with something along the lines of the vintage release, but Hasbro really went all-out on this guy. He’s got a ball-jointed head and shoulders, pivoting hips that slide to allow for more motion, ankles that pivot and swivel, and a pivoting tail. It’s really impressive and allows for a pretty good range of poses.
The look of the creature is fantastic, as well. The face is just leaps and bounds above previous releases. It’s one of those instances where you just sit and look at it for a minute, taking in all the stuff you never really noticed, like the fact that tauntauns have four nostrils. The fur is great and has all kinds of ruffling and implied movement. It really reflects the stop-motion look of the movie creature.
While the saddle is removable, the reins and tail strap thing are not. I don’t get this. While I don’t have any particular need for a nude tauntaun, I think if you’re going to make any of the gear removable it should all be. It’s not like these guys are running around in the wild with reins and butt straps. This is Hoth, not a gay bar.
Other than that, though, this really is a great representation of what’s in the movie.
Until you get to the mysterious undercarriage. 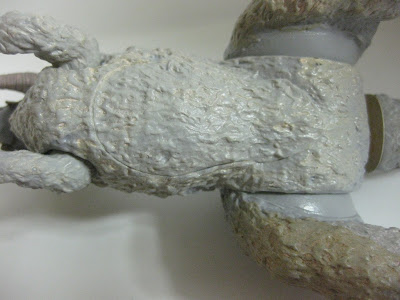 There is a glued-in piece that was quite obviously designed to house a “slice-open” stomach part. But instead it’s just a piece of solid sculpted fur. I played around with it, trying to figure out if maybe there was a secret to popping it out and sticking a figure in there, but no such luck. 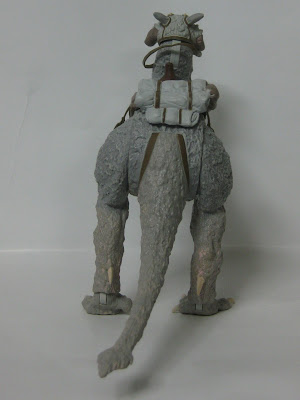 Design: The paint is beautiful on this guy. The facial details and horns are very well done and all of the gradations in the fur look wonderful. It’s not simply a series of washes, the designers actually created some mottling and variations. 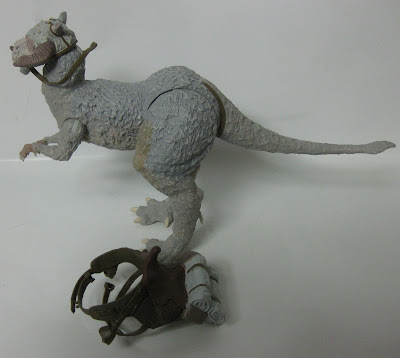 Accessories: Luke’s tauntaun comes with a removable saddle. It fits perfectly on the creature and looks great. If I had a figure with the ability to sit on this guy I’m sure it would look very nice.
The sculpt and level of detail is amazing compared to past tauntauns. Each little pouch and strap on the saddle is well defined and the paint job is solid. 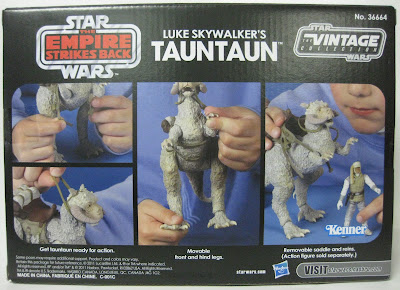 Packaging: While the box exterior is great, the packing inside is a bit more sinister. The first thing I thought when I opened the box and saw this: 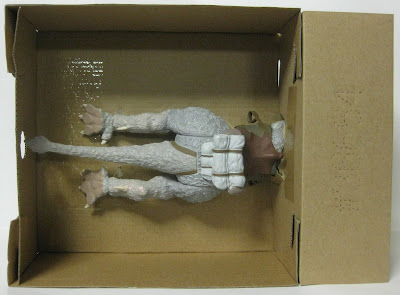 was, “Wow. That looks like some kind of weird breeding setup.” You might think that a bit sick of me, but check out what Wookiepedia has to say on the matter:
“If domesticated, tauntauns would require a grooming parlor to breed. Such a place would stink like the dirtiest imaginable kitchen to a sentient.”
That’s right, folks – I’m not the only one who has considered tauntaun breeding conditions. I’m not even the first one to post it on the internet.
But either way, good job Hasbro for providing us with a bonus tauntaun grooming parlor. To breed. 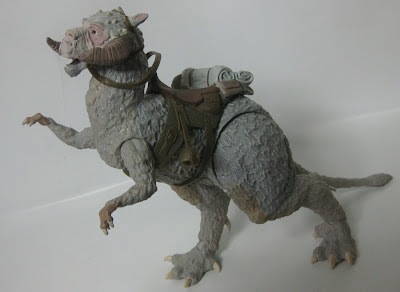 Overall: So not worth twenty-five bucks. The original MSRP of $16.99 that we got back in June was much more reasonable and I think this guy is definitely more in line with the mini-rigs we’re getting than a friggin’ Droid Bomber.
3 out of 5 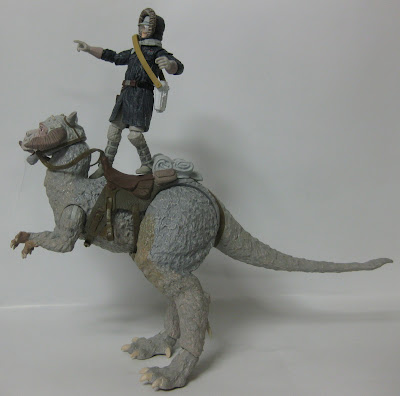 It’s especially ridiculous when you consider the other Target Exclusive tauntaun set that costs the same and includes two figures. And I think that tauntaun even looks nicer.
I would almost bet money that Target will either put this guy on sale or mark him down before Christmas. If you can snag one for $18-$20 you might be happy with it. They’ve been much more plentiful lately, so I don’t think you’ll have trouble finding one.
Until next time, stay creepy
-Phantom
Posted by Phantom Troublemaker at 11:00:00 AM