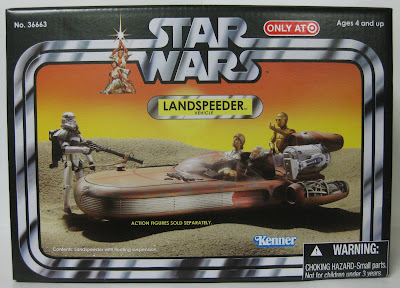 In a way this vehicle is the centerpiece of my Star Wars collection. It was one of the first vehicles I got as a kid – I called it the Sand Speeder then – and to this day still has one of the simplest, most effective, and downright fun features of any vehicle. Naturally I’m talking about the retractable wheels that make the toy appear to be floating above the ground.
Despite the fact that the Landspeeder was left behind on Tattooine before A New Hope was even halfway over, I used it every time I played with my Star Wars figures. It’s one of the most iconic vehicles from the films and much like the toy, the film version had a simple and effective gimmick. They’ve touched it up over the years, but even the original mirror effect under the speeder looked pretty darn good.
It must have been a long time ago that Hasbro announced this and the new Tauntaun as Vintage-boxed Target Exclusives, because I had completely forgotten about them both until I saw them in the store. $25 was way steep for these, but I had to have them. I have slowed my Star Wars buying down so much over the past year that I felt I could splurge a little bit. Of course, then I had to splurge a little bit more when I saw the other Tauntaun set (also a Target Exclusive, but in regular Cinema Scene packaging with Han Solo and a guy that I thought was Luke but realized was yet another Rebel Hoth Soldier when I got him home).

There’s just something about these Vintage boxes that gets me all giddy. I can still hardly stop myself from buying the figure 3-packs even though I don’t need a single figure from them. Why not do some troop builders like that, Hasbro? 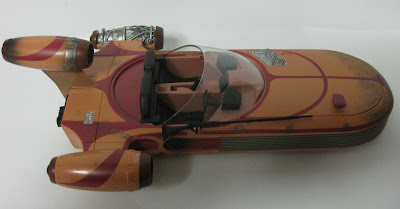 First Glance: I love these boxes. It’s the new toys in the same poses as the old toys on the original box. So great.

Sculpt: This thing is way, way different from the original mold. Most of the changes are improvements.

The last landspeeder I owned was the one that was released after the line relaunched in 1995. I am almost positive it was mostly the same mold as the original because all of the vehicles were initially. This led to a lot of problems with figures fitting into vehicles, as the newer toys were sculpted like He-Man and slightly taller. I’m pretty sure I remember struggling with jamming Obi-Wan and Luke both into the seats.
This new model is longer and slimmer than the old one. The seats are now molded into the body of the vehicle, as is the console. They also sit considerably lower than in the old version, which means that there are no pegs to attach R2-D2’s feet to (try saying that five times fast). Or C-3P0’s, for that matter. Basically, it means that there’s no way for your droids to ride on the back like they do I n the movie. So that’s a big fail as far as this thing being a successful toy.
Another big miss is that it does not have the opening engine compartment that the original had. Now, I understand that at no point in the movie did that engine compartment actually open, but that was such a neat feature.
But as far as looking really neat and being screen-accurate this thing is great. The windscreen is nice and low, the detailing is accurate and the engine nacelles (right? Isn’t that what you’d call ‘em?) are proportionate to the rest of the vehicle. There are also a couple of little extra pieces sculpted on that just give the vehicle more depth. I like the little vent-looking thing towards the front, but I am less fond of the mounting bracket for Luke’s rifle. I guess it looks like it did in the movie, but it’s kind of ugly and doesn’t seem to hold the weapon quite right. That’s unusual for a Hasbro product. Their accessory interactions are usually pretty exact.
The mechanism to work the wheels functions very well. It’s easy to engage and disengage and the “hovering” effect looks as good as it always did.

Design: The coloring on the landspeeder is accurate – there’s no doubting this is Luke’s as seen in the movie. The wear and tear is fantastic. Hasbro has really nailed the process. No more digitized hash marks trying to look like scuffs. I might would have liked a bit more detail in the cockpit, but it still looks good. 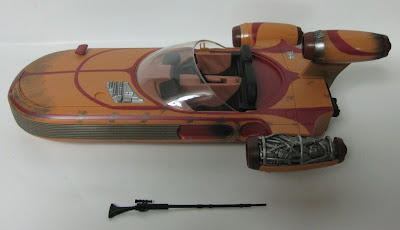 Accessories: The Landspeeder comes with Luke’s rifle. It looks fine and is thankfully made of a firm plastic rather than rubber.

Packaging: Obviously the box is beautiful. The Landspeeder is a Target Exclusive, so don’t expect to see it in standard packaging anywhere else. 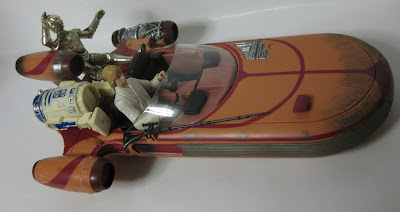 Overall: Not worth twenty-five bucks, but if you see one you’re probably going to want to buy it. I wouldn’t be surprised at all to see this and the Tauntaun on sale before Christmas, so keep an eye out. They’re both pretty much essential additions to your Star Wars collection.
3 out of 5
Until next time, stay creepy
-Phantom
Posted by Phantom Troublemaker at 11:00:00 AM