Toy Review – Masters of the Universe Classics Teela By Mattel 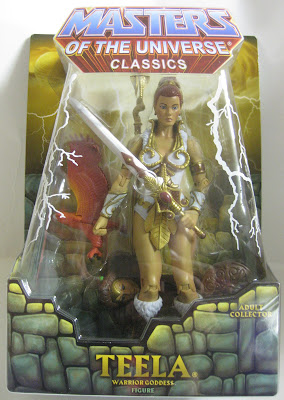 Okay, well – if you’re still with me after yesterday’s ramble, here’s the review I started out writing before it went off the rails.
I’ve wanted a Teela figure since I started collecting the Masters of the Universe Classics figures. Actually, that’s not true. I’ve wanted a Teela figure since I was a kid, as she was pretty cool on the cartoon and a redhead to boot. Although I’m pretty sure the figure leaned more towards brunette. But either way, when compared to such female offerings as Lady Jaye or Baroness, Teela just came off as a little too girly. I never had that many MOTU figures in the first place, so Teela just wasn’t as high a priority as, say, Stinkor (not that I ever had him either).
But now I’ve got a proper, ginger-haired Warrior Goddess to review. Battleground Teela is great and all, but come on – she’s blonde. No comparison. While I hope that we get a full-on 2002-style Teela at some point, this one looks pretty darn good. 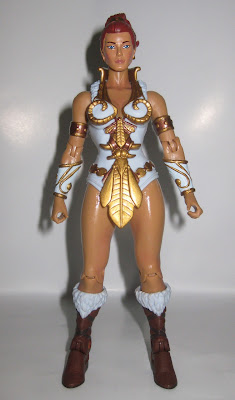 First Glance: It seriously amazes me that this is (mostly) the same figure as Evil-Lyn. And obviously so. But the coloring is done so well and the heads are so unique that both figures really work, even in proximity to one another. 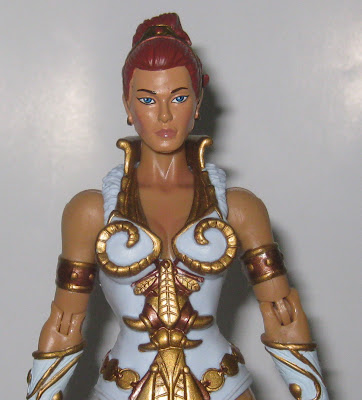 Sculpt: Teela sports the standard female MOTUC articulation, so she can pose pretty much however you like. My only problem here – and it’s kind of a big one – is that her neck peg is way too long. 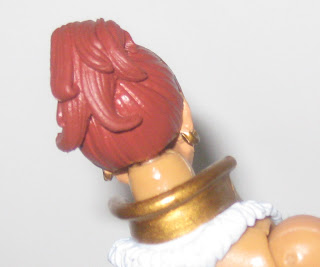 There’s just no way around it – it’s noticeable. Not as much with the big snake collar head, but I don’t like that one. Don’t get me wrong, it looks great, it just isn’t the one I prefer.
The other head looks really good as well, There’s a lot of detail in her hair and headdress and the Four Horsemen have once again given the face a very distinctive and unique character. I know I always make a big deal out of the faces on these guys, but man. It would be so easy to just crank out some generic faces. This really looks like Teela. 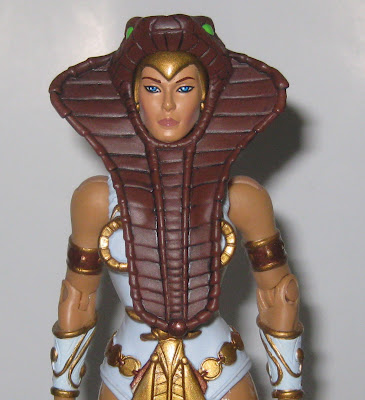 The snake head looks like Teela, too. The old Teela figure, anyway. It’s pretty easy to swap the heads, but I am slightly concerned about that long peg bowing and breaking. I really don’t understand why Mattel did that.
The rest of the figure is tightly sculpted. The bodysuit looks great and the fact that it is a separate piece makes the figure look nicer overall. Sometimes this line really earns it’s For Collectors” status. 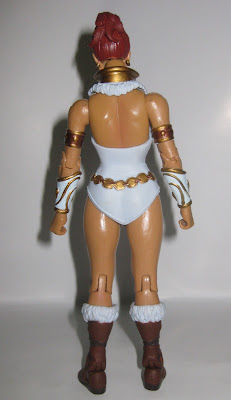 Design: The paint on Teela’s body and costume looks really good. The white, brown, and gold are all tightly applied and stay where they’re supposed to be.
The snake head looks good, too. It’s mostly gold with some makeup and face details, but Matty did a good job.
They did not, however, do a good job on the other head. While the face itself looks pretty good, the paint on the hair does not extend all the way to the end of the hair sculpt, so she has flesh-colored roots or something. Her headpiece is not entirely clean, either. It seems like the hair paint app was a real problem for these guys. I chalk it up to this being an older figure, but that doesn’t make it okay. Especially since this is the head I want to display. 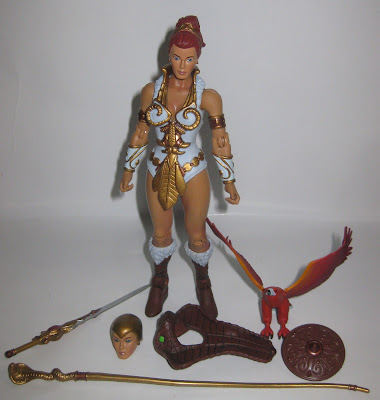 Accessories: In addition to the extra head, Teela also comes with a snake staff, a kickass sword and a bird named Zoar (groan).
The snake head really does look good. It pops out of the armor so you could just have a head with the golden beanie on top. I wouldn’t recommend it.
The snake staff is kind of crap. I mean, the sculpt is actually quite good, but it’s too thin for the figure to hold well and it is made of a flimsy material that got deformed thanks to the packaging.
Zoar is the same bird as Beast Boy and Evil-Lyn’s bird (whose name I can’t recall at the moment). It looks good but the wings and tail are rubber. Blech.
Teela’s sword is awesome. The sculpt is strong and the paint looks great. I would put this up against any other sword from Masters of the Universe Classics. It is one of my favorites. 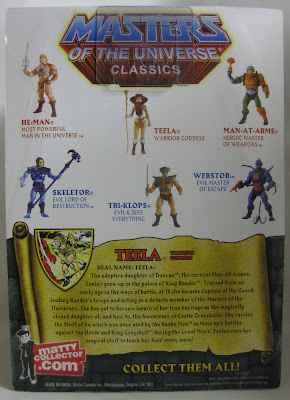 Packaging: Basic Masters of the Universe Classics blister card. I still like the design. 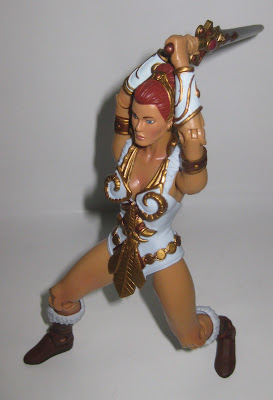 Overall: This is not the Teela I wanted, but maybe it’s the Teela I deserve. I’m just kidding. Nobody deserves this Teela. She looks just fine standing on the shelf from a distance, and so much of the figure is very well done, but the neck peg and the crappy head paint really bug me. Battleground Teela is still the best one. I tried swapping the heads, but I didn’t think this Teela head looked right on the fur bikini body.
2 out of 5
Matty, if you’re going to make two mistakes on one figure, try to make sure they’re not both on the most important body part. You really fucked this one up for me.
If you want a properly ginger Teela, I’d recommend you just wait for the nigh-inevitable MYP version. Even if it’s just a repaint and slight retooling like Battleground Evil-Lyn, it’s bound to be an improvement.
Until next time, stay creepy
-Phantom
Posted by Phantom Troublemaker at 11:00:00 AM