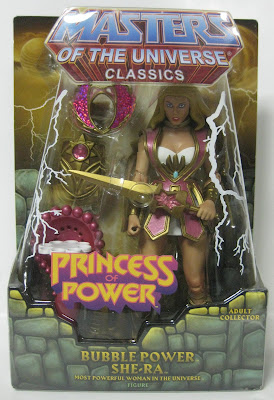 I’m going to see if I can do this figure justice in half an hour. Probably not, which means I might miss Wednesday. I hate missing posts like I have been lately, but work has been a bitch and I’ve had a case of the Mondays every day. Well, every work day.
Note: Obviously I didn’t finish, since you’re reading this on Thursday.
See, the Imperial Federal Government had their noses up our asses last week and it was very uncomfortable, as I’m sure you can imagine. Things were tense and miserable and the only saving grace was that there was a day when the bosses were noticeably uncomfortable. For about 12 hours.

So anyway, I just haven’t had a lick of motivation for pretty much all of November plus a week.
But now it’s December and with December comes all sorts of great things, like this review of She-Ra 2.0, more properly known by the ludicrous moniker of Bubble Power She-Ra. 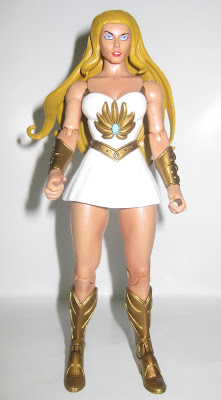 First Glance: Definitely a really neat-o looking figure. The pink is a bit much, but they’re staying true to the original figure. And the bubble wand or whatever, well… I’ll get to that. 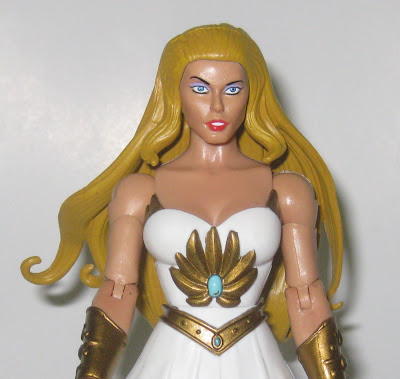 Sculpt: The head does not appear to be quite as nice as the regular head that came with the first She-Ra. The face looks a bit fat and the hair is not as well defined. Also, it’s kind of huge around her face. It’s not as bad as I’m making it sound, but it is noticeably different.
But this figure is superior to the first release in every other conceivable way. She sports the standard MOTUC articulation, but this time unhindered by her dress. And the slits in the side are not nearly as noticeable as I thought they would be. 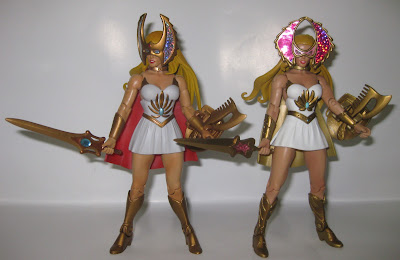 She has new wrists and boots and her midriff section is different as well – probably to accommodate the Bubble Power Armor or whatever the pink tutu thing is called. The boots and the new wrist bands look great, but somewhat different from what I remember seeing in the SDCC pics. I could’ve sworn they were more buckle-and-strappy, kind of like Cosmic Angela’s from the Spawn line. I’ll have to check that. Regardless, they’re much more detailed and fancy-looking than the original’s.
My figure has tight joints and no trouble standing. And even though she has the goofy hips that don’t look right, the skirt covers them up so you can’t even tell. 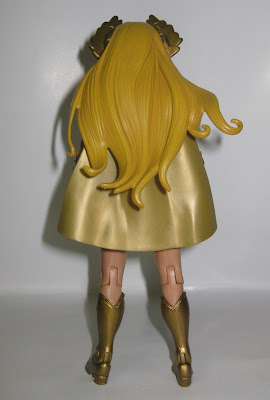 Design: The paint is good, very good. The washes on the gold parts make them look much better than if they were just straight gold and the detailing on the dress is very well done. She has basically the same skin tone and washes as the first She-Ra, which is great. I’m glad they didn’t try to do something different just to do it.
Her hair doesn’t look quite as good to me. The face is excellent, with the makeup and eyes and lips all well done and centered, but the hair just doesn’t look as good as the standard head on the original. 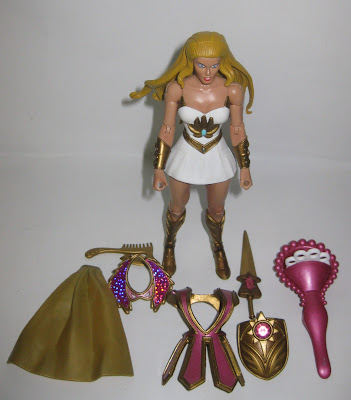 Accessories: This She-Ra comes with a ton of stuff. She has her Bubble Power Armor, a new Sword of Protection, a shield, her headpiece/tiara thing, a cape, a comb/hatchet, and of course the bubble device.
I like the Bubble Power armor a lot. It looks vaguely gladiatorial, which I think is a neat thing for a chick to be wearing since gladiator-types are pretty much always portrayed as being dudes. It’s a flexible rubber with a catch at the back. The only problem is that the paint is flaking off of mine a bit. Not as badly as that stupid fuck Snout Spout’s belt, but it is definitely noticeable. Otherwise this is a neat piece. It should also be pointed out that even though you can’t comb this figure’s hair, you can dress her up. As some Phantomaniacs might prefer.
Actually, I had a pretty ingenious idea the other night while discussing female toys in collector’s lines with a certain Phantomaniac. Prompted by some very insightful observations that I would have never made thanks to my penis, I decided that Mattel has indeed blown it with their Princess of Power figures. Every single figure of She-Ra and her contemporaries should have included a second head with rooted, combable hair. Even Swift Wind could have had swappable manes. I mean, really – how much sense does it make that Grizzlor has fur and Megator has rooted hair (wretched-looking though it may be) but none of the POP figures do? Especially when they all come with combs. That’s just damn crazy.
The weapons look good and match the scheme of the figure. Mattel is almost always good with detailing their MOTUC accessories and Bubbly She-Ra is no exception. The sword looks great and the gem in the blade is secured nicely. The shield fits perfectly on her arm and the comb thing manages to not look too silly. 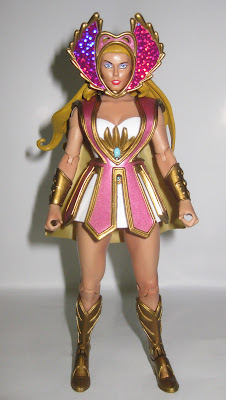 Speaking of silly, the tiara/mask that comes with this She-Ra is a little bit. I get people not liking the peg hole in the last figure’s forehead, but the haphazard way this one clips onto the head isn’t much of an improvement. It’s pretty much fine when you have it situated around her face, but when you flip it over to use as a mask it doesn’t sit very well.
The Bubble Power Bazooka or whatever it is... well, I probably don't need to explain to you that it looks a bit inappropriate. Like, I think there's a pretty good chance She-Ra keeps it in her bedside drawer. Ahem. But the little disc does move, so you could conceivably blow bubbles out of this thing. If I'm feeling extra sassy and invulnerable to shame one day I might try it and post a video for you people. 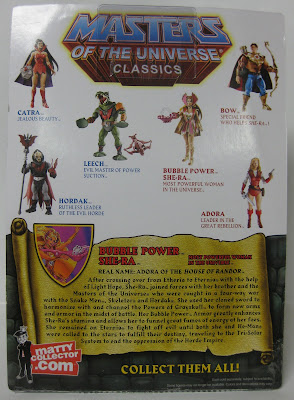 Packaging: Basic Masters of the Universe Classics blister card. I still like the design. I also like the lengths the author of the bio went to in order to make the Bubble Power seem legit. 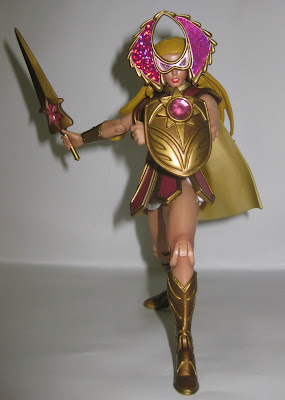 Overall: This is a worthy update to the original She-Ra MOTUC figure. The only thing that really bothers me is her fattish face. And it really isn’t that bad, especially with the mask thing attached.
4 out of 5 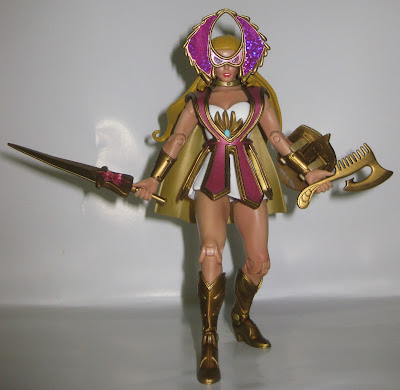 I think the November figures are the last ones Mattel has any intention of releasing for the time being (but I could be wrong – might be October), you should be able to go to BigBad and preorder one if they don’t already have them in stock. 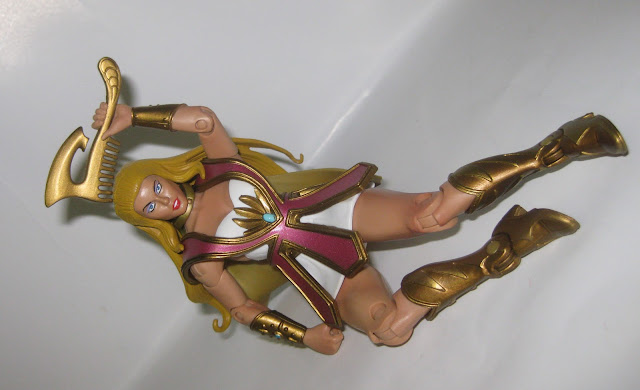 Until next time, stay creepy like that picture
-Phantom
Posted by Phantom Troublemaker at 11:00:00 AM