Toy Review – Masters of the Universe Classics Tytus By Mattel 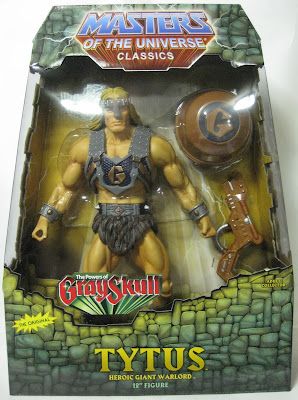 So I had writer’s block for a while. Not just on the couple of non-blog pieces of fiction I’m working on, or even just some bullshit about comics. I couldn’t even crank out a toy review. It was bad. Normally I am pretty bummed out through most of November, but once we get the house decorated for Christmas I’m back to my normal, ebullient, optimistic self. But this year it took me about an extra week to get there. I’m not sure why, but all that matters now is that I’m over the hump and ready to get back to work. Er, quasi-work.
Which means I am finally getting around to reviewing a bunch of stuff that’s been sitting around for a while now. There’s the Star Wars Exclusives I mentioned the other day, the Hot Toys Alice, and all the crap I got from the Mad Matty Monday sale. I think part of what kicked me into gear was that the first box from Matty’s Black Friday/Cyber Monday sale arrived yesterday (last Friday) and I realized I am about to get seriously backed up. As in, nothing but toy reviews for December backed up.

So I’m starting today with one of the centerpieces of the two boxes I got from Mad Matty Monday – Tytus: Giant Friend of He-Man (or whatever). Actually, the Skeletor/Mo-Larr set was the centerpiece, as it was in every single assortment Matty sent out (I don’t know how many different packing combinations there were – at least five I think). Apparently Mattel got stuck with a lot of those things.
If you don’t know, Mad Matty Monday was a sale Mattycollector.com had where you paid forty bucks and got a box full of toys. There were three different options – Masters of the Universe Classics, Ghostbusters Classics, and DC Universe. I ordered two MOTUC boxes and received the following:
Box #1 – Mo-Larr, Bow, Moss Man, Tytus
Box #2 – Mo-Larr, Gygor, Keldor, Adora
Both boxes are pretty much wins, especially for forty bucks apiece.
I have skipped on Tytus a couple of times now. He just seemed a bit bland to me. Being giant wasn’t enough of a selling point and I absolutely hated his stupid weapon. I get that it’s what the vintage one had, but geez – that thing is dumb.
But to get the big guy for basically ten bucks? Okay. 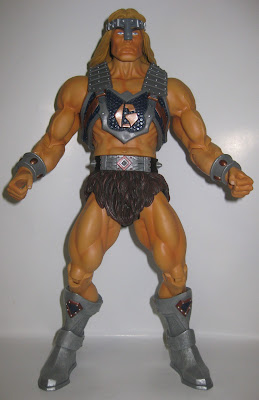 First Glance: Like many of Mattel’s products, Tytus looked better in person than he did in previews. Once I got a good look at him I was glad enough to have one. 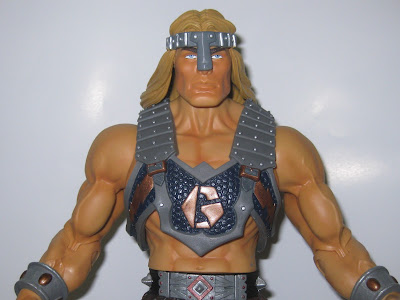 Sculpt: Tytus shares much of the same construction as Megator, which is just fine. He is a hollow, rotocast plastic that is actually a bit sturdier than I thought it was back when I reviewed Megator. Both giants have held poses very well and are not yet suffering from warped limbs.
Tytus’ unique parts consist of his boots, hands, head, and belt/furry pants.
His head looks great and is the main reason I like the figure. Tytus reminds me of Marc Singer as Dar from Beastmaster. His hair looks good, the face is distinctive rather than just being a big He-Man and the armor thing on his forehead is cool.
The belt has a nice design and so do the boots. They might be a little more sci-fi than I would have gone with, but they look solid.
Due to his size Tytus can’t so a whole lot of meaningful posing, but he does have ball joints on his neck and shoulders, pivot hips, knees, and elbows and swivel wrists and waist. All of the joints are tight and I haven’t had any problems with the big guy standing.
His chest harness thing looks really cool. I still don’t quite buy the “G” in the middle making any sense, but I kind of have to wonder why an Eternian giant has an English letter on his gear anyway. 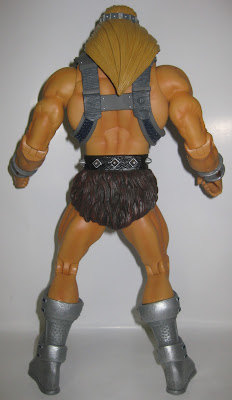 Design: Tytus looks very solid paint-wise. There is a nice shading to his skin and his face in particular stands out. I like the color combinations here. The silver, blue, and brown color scheme works.
The detailing that is present on this very basic figure is done well, and there are no errors or dripping on mine. 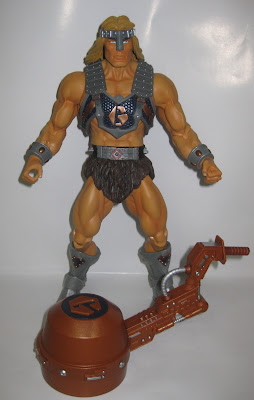 Accessories: Tytus comes with the big, stupid thing in the above picture. It is intended to either capture the standard MOTUC figures or make it look like Tytus smashed their heads into their bodies. I’m not sure which. It looks fine and is certainly a modern update to the weapon that came with the original Tytus, but I still hate it. Spy Monkey Creations produced a badass warhammer for this guy called Chalybeous and I’m gonna have to get one. 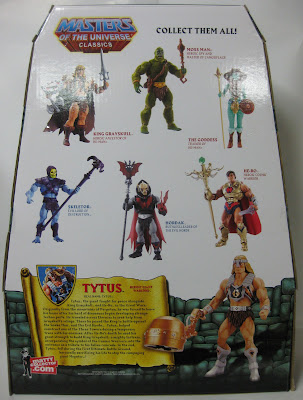 Packaging: A nice Masters-themed window box. Matty’s packaging for the larger-scale MOTUC items is some of the classiest in the business. Well, among more standard-priced fare, anyway. 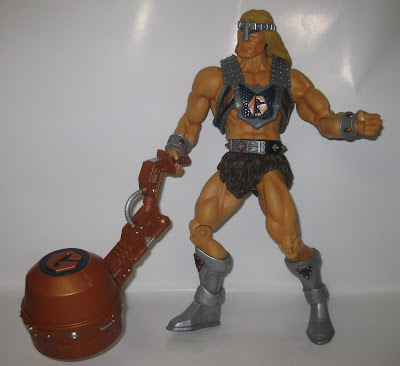 Overall: I’m perfectly happy to own a Tytus. He can’t really fight Megator or anything due to the basic articulation, but they’re pretty much just going to be standing on a shelf anyway.
4 out of 5
I bet you can get one for list price or less on eBay. Apparently Mattel sent out a lot of this guy. 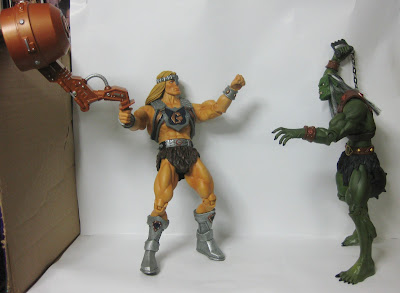