Toy Review – Masters of the Universe Classics Icarius By Mattel 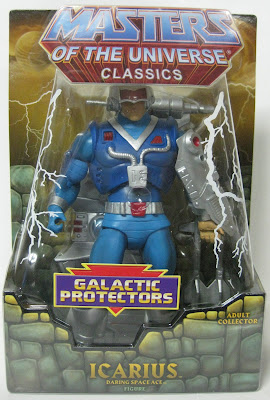 Holy crap, I totally forgot to review this guy!

I put it off because he came out during October and he is clearly not a Halloweeny release. I had intended to post the review at the beginning of November but I never even wrote it apparently. This came to my attention the other day when that piece of shit Snout Spout fell over and knocked Moss Man and Man-E-Faces off the shelf. As I was putting that stupid piece of garbage back in his place at the rear of the shelf, I saw Icarius standing there on the shelf below and wondered why I couldn’t remember writing about him.

It’s because I never did.
So I am here today to correct this grave oversight. I don’t know why I’m being so dramatic. I’ve got a huge number of Star Wars and GI Joe toys photographed that I have yet to review. Most notably the new Sand Speeder, Tauntauns and Republic Commandos from Hasbro’s still-strong Star Wars line. I don’t know why I feel so compelled to write about Mattel’s fun yet comparatively mediocre (the line overall, not the figures individually) Masters line.

Actually, I do. It’s because Hasbro’s toys tend to range from good to great and that just gets hard to write about. Mattel’s toy lines, though – they are a fucking treasure trove of material for a toy reviewer. They are either great or horrible and rarely in between. That is the real reason I keep subscribing. Because it’s exciting every month not knowing just how good or wretched your figure is going to be. 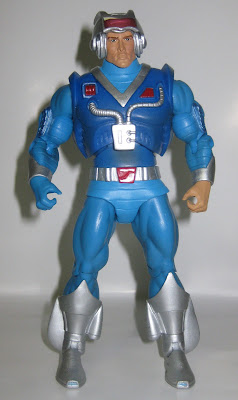 First Glance: I wasn’t all that excited about this guy initially. I wasn’t opposed to him, but he just didn’t do much for me. But seeing him in person I can appreciate not only how many new parts he got, but also what a neat-looking toy he really is. 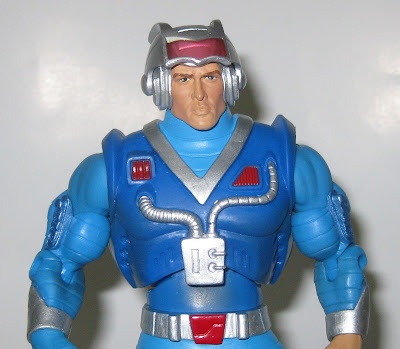 Sculpt: As with all of the Masters Classics Icarius has a basic body. But for something that looks like a fairly generic 80’s-era toy, he sure does have a lot of new parts. Not only that, they’re parts that I can’t figure out another use for. Granted, I can’t summon a list of every Masters of the Universe character to mind at will, but I can’t think of anybody else that might use these ankles.

The joints on my figure are all adequately tight. This was a big concern for me going in, because pretty much any loose joints from the abdomen down were going to be a problem considering that big-ass jetpack on his back. As it is, my Icarius is balanced very well and hasn’t fallen over once.

His crazy jet boots look… well, they look stupid. But they fit the character very well and I don’t dislike them. I just can’t deny that they look fucking goofy.

Icarius has some gadgetry on his vest that looks neat. Not much to say about it, but it’s new so it’s worth mentioning. 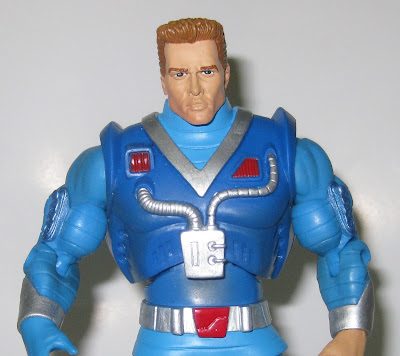 The heads that come with this figure are excellent. Just the fact that we got two heads is impressive, but the fact that the helmetless head looks like Val Kilmer is just magical. At first I thought Kurt Russell, but after some discussion with the Hooligans we all agreed on Kilmer. I just hope whenever Matty gets around to Sea Hawk he looks like Carey Elwes. Icarius’ helmet head looks very good, with lots of detail and just general space-age awesomeness on the headgear. The only thing I don’t like is how loose the visor is. It looks great whether up or down and the red tinting on the lenses looks awesome. But the thing is just shy of falling off in a stiff breeze. I suppose it was designed like that so there wouldn’t be giant holes in the sides of his helmet when you display Icarius without the visor. Not a big deal, but just know that if you touch the thing at all it is going to fall off. 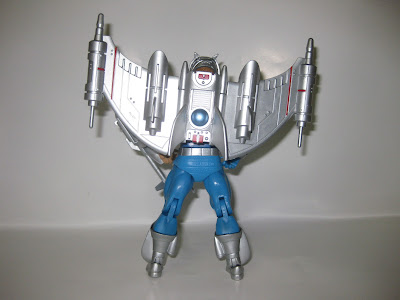 Design: Icarius is kind of bland, but he does look really good. There are just enough different shades of blue to break things up and the silver of his accessories compliments it very nicely.

The actual paint application is very solid. The heads both look very good and have a nice amount of detail that isn’t sloppy anywhere. There are no paint errors on my figure, and all of the various colors stay where they are supposed to be. Even the buttons and wiring that are painted on his gear look very good.

I don’t quite understand why Icarius’ left hand is bare. I guess so he wasn’t totally blue, but it’s just odd-looking. I don’t hate it, but man; it’s weird.

It’s kind of hard for me to believe that Snout Spout and Icarius are from the same company. I mean, ignoring the obvious similarities. Icarius is a bland-looking character that was subtly designed to look more exciting than he really is. Snout Spout is a bland-looking character with one exciting feature that just missed the mark entirely. I don’t understand how the same group of people could have done such a good job on boring jetpack guy and blown it on a guy with a freaking robot elephant head. 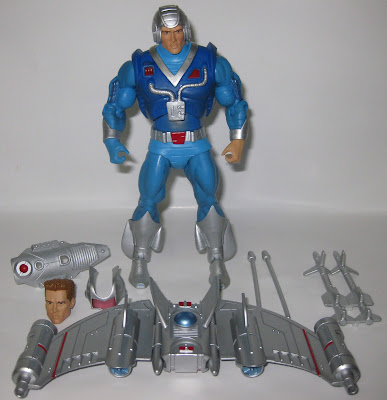 Accessories: Icarius comes with his jetpack, his visor, an overly-large missile launcher, and 4 (four!) missiles.

The jetpack looks absolutely great, though I still feel that it looks upside-down. I know that’s just the design of the original toy, but it would have been neat to be able to flip it over so it didn’t look so awkward. Still, the removable missiles on the wings are a nice touch and overall it is a very Masters-looking piece of machinery.

I already talked about the visor above, but I did want to mention again how great it looks regardless of its looseness.

The missile launcher is pretty weird. It’s HUGE. Visually it fits with the figure just fine, but it looks so darn unwieldy on his arm. I was torn on whether or not to actually put it on for display. I think I mainly did it to cover up that weird, bare hand. 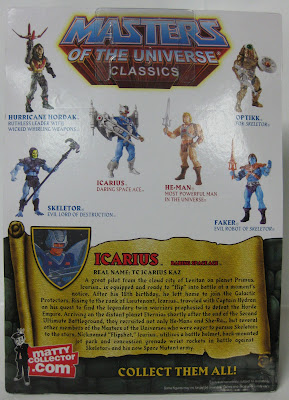 Packaging: The standard Masters of the Universe Classics packaging. It looks nice and makes the figures look even bigger than they are. You also get a bio on the back that is sort of a composite of each character’s history. Obviously I think we all know that this character’s name was originally Flipshot. Mattel couldn’t use the name here because they let the copyright lapse and Hasbro used it for one of their Nerf guns. Fine by me. I like “Icarius” better anyway. I don’t know who came up with it, but good one. 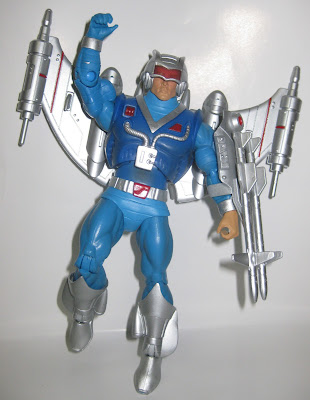 Overall: For a figure I was not very excited about, Icarius really got me. He’s fun to play with and looks neat-o on the shelf. He’ll never be one of my favorite MOTU Classics and I certainly wouldn’t have bought him if I had a choice, but I’m definitely okay with owning him. He was worth the price. 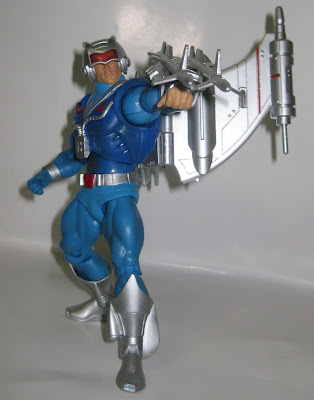 This is another character that is hardly essential. If you ever see him on clearance I’d say go ahead and grab one, but if you skip him you’re not really missing anything. They did a good job, but Icarius is not a must-have by any means.