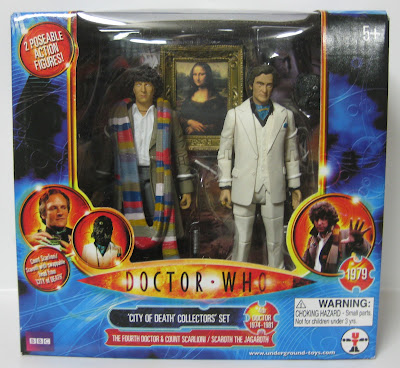 I’ve mentioned it before, but in case you haven’t read every single article here on Needless Things like you so totally should, City of Death is one of my favorite Doctor Who stories. It stars Tom Baker – who will always be My Doctor – and Lalla Ward as Romana – who is high on my “Companions I’d Like To Bone” list. The story was written by Douglas Adams (yes, that Douglas Adams) and it features a good bit of his signature humor.
While the episode itself has great pacing, an exciting story, and very strong acting from the entire cast; the very best thing about it is this:
That is Scaroth of the Jagaroth and he is one of the best villains ever, both in design and in the story.
Actually, if you want to know more just check out this article. But really you should just watch it.

Just so you know what’s going on in the box set here, Scaroth is the last of his people to have survived a crash landing on prehistoric Earth. In a scheme that Cobra Commander would call convoluted and ridiculous, he is coordinating with past versions of himself to commit art fraud. Seriously.
It is so bizarre to be living in a time where all of my Doctor Who toy wishes are being fulfilled. Just the fact that there even are any Doctor Who toys is good enough, but we’re even getting a ton of classic toys. I have the first eight Doctors standing around a TARDIS in my office, some of them in multiple attires. And not just repaints, either - completely different sculpts! I own toys of Daleks, Sontarans, Zygons, and even a friggin’ Axon! I have two versions of the Master and ten different Cybermen! I’ve got a Leela figure, you guys.
Go check out this article real quick.
Okay, so my top three are basically happening. Leela is already out with two variants on the way. Omega is coming before the end of the year. And now we’ve got a Scaroth. Of course, Jo, Borusa, and Romana have yet to be announced; but I have faith that we’ll see all three sooner than later.
While I would much rather this set be what I wished for in my article and include Romana II, the Doctor figure it comes with is a pretty good departure from all the other 4th Doctor figures. He looks just as he did in the story and features a significantly different scarf from the others. Lots of toy companies would just flub little differences like that, but Character Options is very clever about tooling for re-releases. 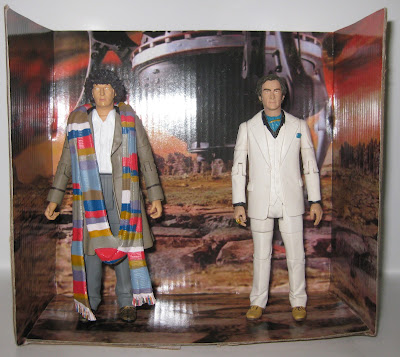 First Glance: Good lord, Scaroth looks great. And for some reason it just doesn’t bother me to be getting another Tom Baker. And look! There’s even a little Mona Lisa in there! 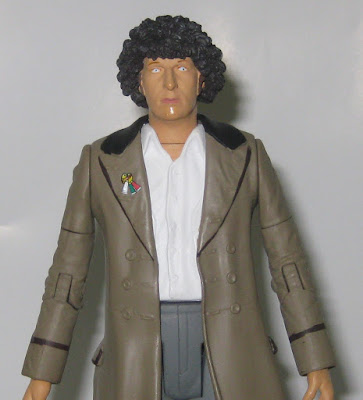 Sculpt: (don't mind that thing on his chin - that's some weird camera thing, not the figure)CO’s figures just keep getting better and better.
The Doctor has the hatless, somewhat morose Tom Baker head. It looks exactly like Tom Baker, so I’m not sure what more you could ask for. He sports the old CO articulation – the weird ball-joint analog hips that Mattel uses, pivots at the elbows and knees, swivels at the waist, wrists, neck, and thighs. I say this is old because now we have some Doctor Who figures with better shoulder articulation.
The Doctor has a longer coat with no vest and an open-collar shirt. The scarf is not unique, but has been used less than the one where the loop sits closer to the neck (I think). It can be taken off. 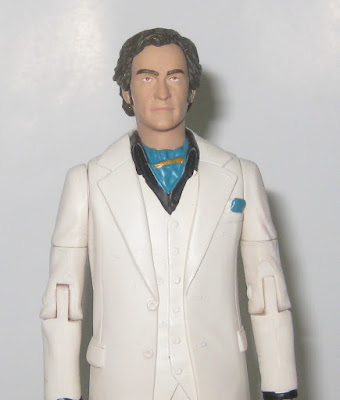 Scaroth comes with a Julian Glover head and a Jagaroth head. The human head looks amazing – one of the best from this line. The likeness is spot-on and the hair has some of the best detailing I’ve seen from the Classics line. The alien head is also fantastic. Tons of detail in the weird, noodle-looking skin. Both heads are fairly easy to remove and replace. 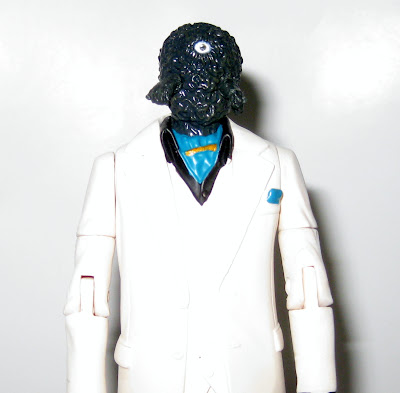 Scaroth’s body is a new suit sculpt. It is articulated exactly the same as the Doctor’s body. He’s wearing a fancy, three-piece suit with enough little detail to make it stand out, such as his ascot with the little clip and the thing in his pocket. What is that called, anyway? A handkerchief? Pocket-accent? I own one and I don’t know. Of course, Scaroth’s probably isn’t a pre-folded cloth stapled to a piece of cardboard.
He also has the big, gaudy jeweled ring on his right hand. 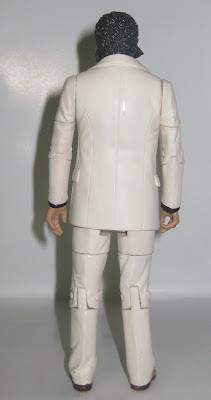 Design: Scaroth is pretty basic, but those nice little details I mentioned above are painted well and tightly. The heads both look very good. The alien head is that hideous green color, but it also has some very nice shading that brings the detail of the wrinkles and folds out. The human head is clean and all the parts stay inside the lines. 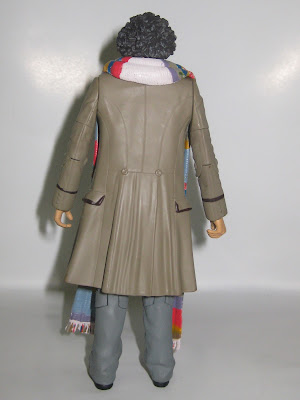 This particular Doctor is a bit brighter than some of the other Tom Baker figures. His scarf is noticeably cheery and the lack of vest or tie over the white shirt brighten him up as well. The coat has some very nice piping painted on, as well as a little something that is true to the episode but obscured until you remove the scarf: a little art lapel pin. I don't remember the commentary explaining it, but I'm sure there's a story. This is true to the show, but odd because lapel pins are notably affectations of the sixth Doctor, Colin Baker. He actually wore a different pin for each of the cats he owned over the course of his tenure as the Time Lord. Back to the other Baker, this one’s head has a nice paint job, but the eyes are a bit lighter than I’d like. They’re not bad, just a little odd. 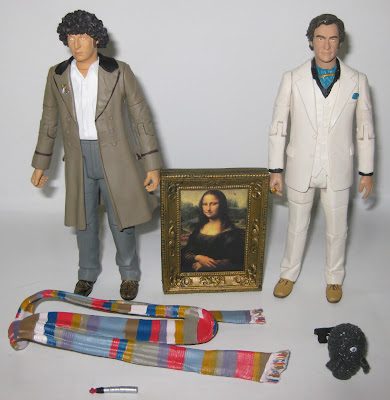 Accessories: In addition to whichever Scaroth head you consider extra, this box set comes with Scaroth’s pistol, the 4th Doctor’s sonic screwdriver, and a (presumably fake) Mona Lisa.
The pistol and screwdriver are what you’d expect. The figures can hold them just fine and the sculpts are good. The paint is minimal but accurate. The Mona Lisa is a sticker on a frame, but looks neat and was a great little bonus that I was not expecting. 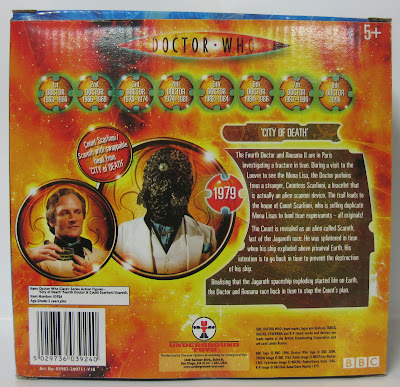 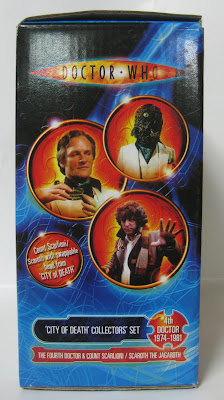 Packaging: I love the window boxes these sets come in. This one has a little removable mini-diorama like the Axon set, but it isn’t as striking. I tossed it. 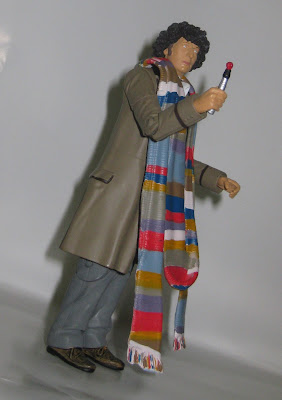 Overall: As with all of the Classic Doctor Who toys this set is overpriced, but strangely worth it. To me, anyway. I would have preferred it if Romana had been in the set rather than the Doctor, but at least this is a significantly altered Doctor #4.
4 out of 5 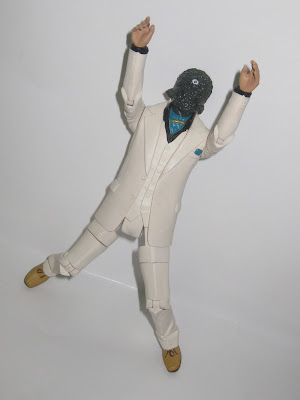 I don’t know how useful my reviews of these Doctor Who toys really are. They’re so pricey that only people who really want them are going to buy them, and if people really want them, they’re not going to be as concerned about how great they are. Fortunately, moist of them are pretty great. I docked this one a point just because of the Doctor figure. I mean, he’s a neat variant, but Romana would have been better.
Until next time, stay creepy
-Phantom
Posted by Phantom Troublemaker at 11:00:00 AM