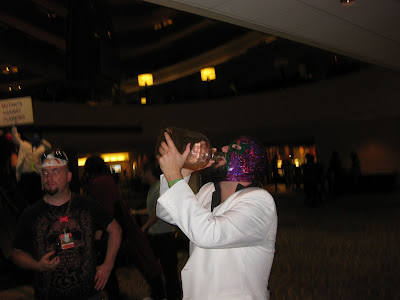 Yes, I did attend Platinum Championship Wrestling’s show at the Masquerade last Thursday night. Yes, I was entertained by a lot of what I saw.
However. For a variety of different reasons December 15th was more about getting out and partying than it was about watching wrestling, and let me just tell you the Hooligans made the party happen. But PCW certainly helped.
I had already been planning on going incognito for the event. We had a few guests from out of town as well as a couple of Hooligans that can’t always make it out, so hanging with my people was more of a priority than running around in my mask and taking a bunch of crappy pictures, as will become obvious over the course of this non-recap.
The Hooligans boasted a record attendance at the show with myself, Mrs. Troublemaker, Rescue John, Lady Evil (who I am trying to find a better nickname for. I knew her before I knew Evil, so it hardly seems fair to define her with his moniker. I’m leaning towards “Boots” because she always has some kind of awesome boots on. I’m creative like that.), Evil, Angry Matt, Darth Pete, the Grand Hoff, and Little Pond. Me and the first three all squeezed into Angry Matt’s tiny sedan. I got to sit up front since I am nigh-gigantic, but the rest got to know each other very well by the time we got downtown. Everybody else met us down there, including Evil who was already in the area.

Email ThisBlogThis!Share to TwitterShare to FacebookShare to Pinterest
Labels: life the universe and everything, tales from the troublemaker