Argh! I Have Got To Write Something About Christmas! 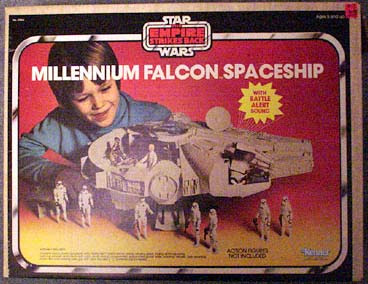 I have two hours left here to write before I go on vacation for seven days, where I assure you I will not be doing any writing. I do not have enough entries for next week, but I’m going to figure something out. Mainly right now I am concerned about a Christmas post.
It’s hard to do Halloween posts every year, but I get by because there is so much stuff that can fit under the Halloween umbrella and work on a nerd-oriented blog.
Christmas, on the other hand, is kind of a pain. I love Christmas every bit as much as I do Halloween, but there’ s only so much Christmas stuff to write about. Especially when you’ve done it for three years. How many times can I list my favorite Christmas movies or tell you how great I think rum and egg nog are?
But I do want at least one strictly Christmas post, so here it is. I’m going to reminisce about some of my favorite Christmases in no particular order.
My favorite Christmas by far is the one we had last year. I worked the night of Christmas Eve, so I came home, wrapped a few gifts and went to sleep (just like I’m going to do in the morning, though it is the 23rd this year – more time for me!). Mrs. Troublemaker took Lil’ Troublemaker over to her mom’s so they could do a little celebrating over there. While they were gone, Santa came and set up a brand-new tree in the living room. See, we had done Christmas downstairs in the previous years, but in 2009 after the flood it just wasn’t very nice being down there. The carpet is gone and the repairs we had to make just make it not as much of a nice, homey environment. But we don’t have anywhere else to put the big tree. So Santa brought a smaller tree that fit in the living room upstairs as a surprise for the family. By the time they got back home, the tree was set up and lit and there were a ton of presents underneath. Santa worked his ass off last year.

The earliest Christmas I can remember was probably still in the seventies. We were at my grandparent’s house in North Carolina, which was my favorite place in the world when I was a kid. I got a bunch of the standard Mego figures – Batman, Spider-Man, Superman – as well as this one Spider-Man toy that was probably about twelve inches tall. It had a web that shot out of the wrist, but also a webline that could be hung between two points. I think he would slide across it or had a motor that made him crawl up it or something. I can’t remember exactly, but I played with that thing a lot. That was also the year I got my Batman footie pajamas. I wore those things all the time. I bet my mom got sick of washing them.
Another year – probably not too much later – I got the Star Wars toys. This was also at Granny and Papaw’s house. Santa had actually opened up the Millennium Falcon and posed a ton of the figures around it just like the box art. There were three or four Stormtroopers outside with some Imperial Officers, Han and Chewie and Luke were inside. I think Lando and Lobot might have been there, but I specifically remember the Stormtroopers and the good guys inside. That’s probably one of my favorite Christmases ever. It blew my mind at the time, but to know what I know now it means so much more. That the time was taken to set up that little scene and make the gifts extra-exciting; well it’s just not the sort of thing Santa did a whole lot.
There was a year in high school where I was spending Christmas Eve over at my girlfriend’s house with her family. Her dad was this really great guy that I still am glad to have known. Her brother was an irritating little brat, but he was a great kid. We had a lot of fun and he ended up being a good man from what I understand. The girl was very sweet and if we were both a little more mature (mostly me) we probably would have lasted a while. We were in her bonus room doing the stuff teenagers do when I realized it was 11:45. This was a problem because I had told my parents I would be home by 11 to put out milk and cookies for Santa with my sister. I got one last sloppy, teenage kiss and hopped in my car, doing probably 65 in a 45 zone trying to get home faster. Naturally I got pulled over. The officer was very kind and wanted to know why I was driving so fast. He gave me the usual spiel about not getting anywhere on time if I got in a wreck or, say, pulled over. I told him I was so sorry and had lost track of time and of course I’d never speed again. He told me Merry Christmas and let me go with no ticket.
There was also the year that me and my crazy girlfriend stayed at my parent’s house. That was a horrible, horrible nightmare and was the first time I’ve ever had somebody ruin Christmas for me. I just believed so much that if I could show her these people cared and wanted to have fun, that there was joy and love there; that she might just be nice for once. I’m telling you, man – I believed with all of my heart that Christmas was going to work its magic that time. It absolutely crushed me that I was wrong. It broke my spirit a little bit. That was definitely a year that I grew up, much more so than the one where I figured things out.
Then there was the year I figured out what I know now. Naturally the kids at school talked. Naturally I snooped. This was the year the Holy Grail of all GI Joe toys ever came out: the USS Flagg. Seven-and-a-half feet of plastic featuring a PA system, a working elevator and room enough for your whole Joe navy and several vehicles. It was fucking majestic. There was no other toy like it – thought the Eternia playset came close – and there has not been one since. I’d bet money there never will be. I won’t go into the whole story because even here on my adult-oriented blog I won’t discuss certain things about Santa Claus, but the Flagg was key in the proceedings. You should be able to put it together. I left a note for Santa asking him what I was wondering about and wanting him to explain certain aspects of what he did, and I still remember the response word-for-word to this day:
“There are some magical things in this world that cannot be explained and should remain joyous mysteries. As long as you are young at heart and love the season of Christmas, you can believe in what I am and I will be real.”
Until next time, stay merry
-Phantom
Posted by Phantom Troublemaker at 11:00:00 AM

Email ThisBlogThis!Share to TwitterShare to FacebookShare to Pinterest
Labels: christmas, holiday specials, life the universe and everything