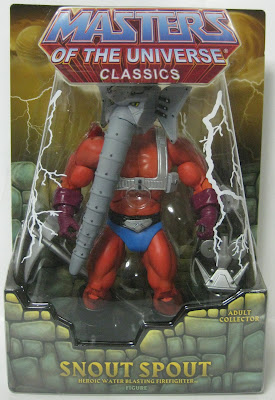 I never had Snout Spout when I was a kid, but I remember him well. How could you not recall a guy with a robot elephant head that shoots water? And has to hold his trunk up with the butt end of an axe?
I like goofy figures with crazy gimmicks, so I was pretty happy to be getting this guy. And I felt sure the Classics update would be even cooler than the original.
I was wrong. Let me say up front that I totally hate this figure. I’m not sure exactly how much yet, but we’ll all know by the time this review is done. Maybe I’ll talk myself into liking it, maybe I’ll realize ol’ Spouty is even worse than I thought. We’ll see. 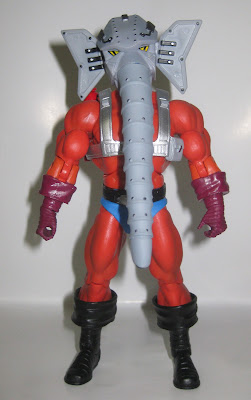 First Glance: Snout Spout looks good in the package. His trunk isn’t what I thought it would be though. Huh. And he comes with the jaws of life! Score, right? 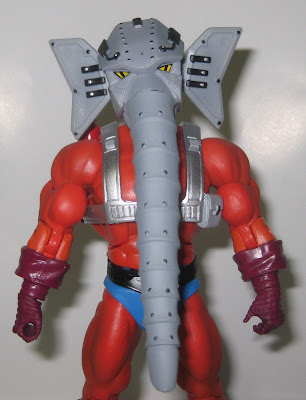 Sculpt: Snout Spout has the standard MOTU Classics body. All the joints are tight on mine and he mostly stands okay (we’ll get to that).
He’s sporting new forearms and boots and has a little rubber loincloth that looks like trunks rather than having the furry underpants. The gloves are ribbed (insert joke here) and have the too-small human hands that I don’t care for. Spouty’s boots are pirate-style with the folded-down top and look pretty good.
Snout Spout’s head looks good. The sculpt is really cool and has lots of detail and his ears move a little bit. His trunk, however, is foam and I think that’s a bunch of shit. I’m sure I would have realized it if I had looked more closely at the pictures, but I really thought the thing was segmented plastic. As it is, it feels like something that is going to deteriorate and possibly break off within a few years.
Oh, wait – did I say a few years? I meant to say “before you even take him out of the fucking package” because the left side of my figure’s trunk had already started to separate from the head before I even opened him: 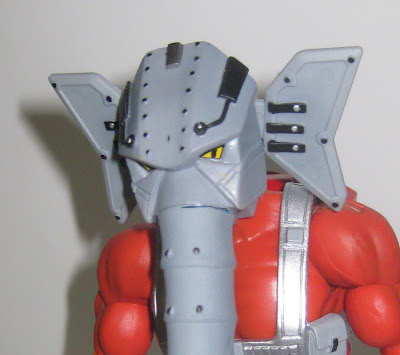 I don’t like the way the trunk looks, moves, or is lasting. It is obviously a different material from the head, I am hesitant to pose it too much because the foam and the connection to the head seem fragile.
Also, I am having a ridiculous amount of trouble getting him to stand up. For as solid as his joints are and the fact that I suspect his foam trunk was an attempt to make him better balanced, he just doesn’t want to stay vertical.
Snout Spout also has a harness and backpack. The harness is kind of bland except for a single pouch on the left side. The backpack is just weird. I mean, it looks fine, but what does it do? You can’t store either of his accessories on it and it doesn’t seem to have a specific purpose. 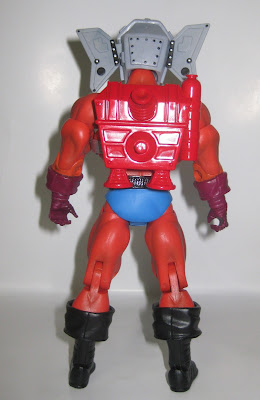 Design: Obviously the crack at the connection point between trunk and head looks terrible and breaks up the paint. Otherwise, Snout Spout’s head is painted very well. All the lines and rivets and stuff look really good and his eyes are oddly haunting.
The rest of Snout Spout is somewhat painfully plain. His boots, torso, and gloves are all one color; but the application is accurate.
His rubber trunks do what they are supposed to, but the paint had rubbed off of the belt part before I even opened the figure: 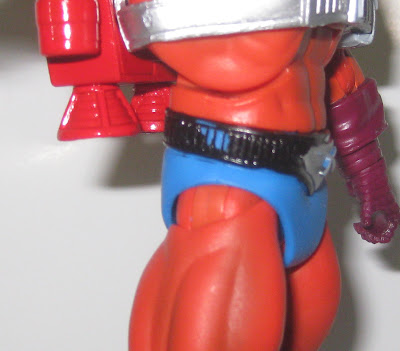 Speaking of paint rubbing off, I am not sure what the nozzles on the bottom of Snout Spout’s backpack are supposed to be, but they have weird smudges of silver on them: 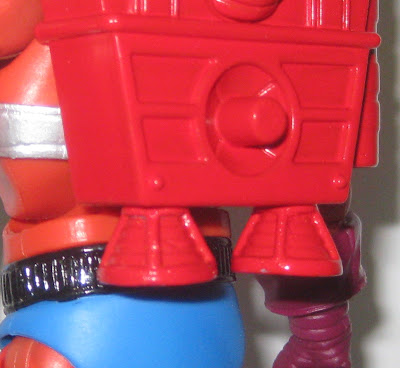 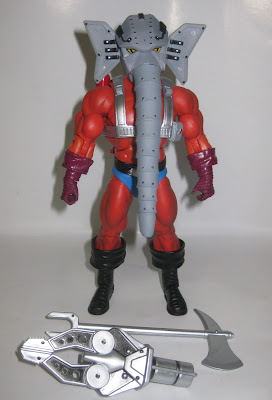 Accessories: Snout Spout comes with his axe/nose holder and whatever Eternians call the jaws of life.
The axe looks fine and thank the lord isn’t made of rubber. The end that is supposed to hold his snout up is small and can only fit on the very tip of the figure’s trunk. But it really doesn’t matter because the pose that results from this placement is so awkward you really aren’t going to want to do it anyway.
The jaws of life look great and open and close like they are supposed to. You can only put them in Snout Spout’s left hand, though. His right thumb sticks up too far to hold it quite right. 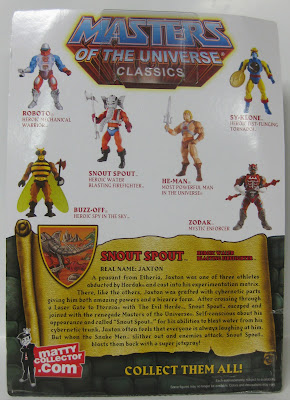 Packaging: The standard Masters of the Universe Classics packaging. It looks nice and makes the figures look even bigger than they are. You also get a bio on the back that is sort of a composite of each character’s history. Snout Spout’s real name is Jaxton and he is an Etherian athlete that Hordak basically stuck a big elephant head on. His life is shit and so is his figure. 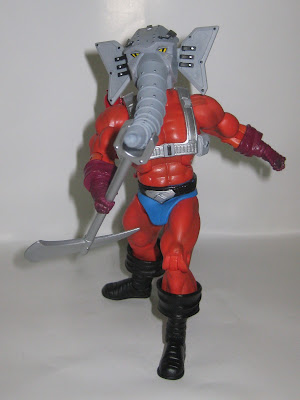 Overall: Yes, I do indeed hate this figure an awful lot. It’s made worse by the fact that I was pretty excited about it. The trunk sucks, the paint is bootleg-toy-bad in a couple of spots, and he just looks boring aside from the actual head.
1 out of 5
I guess if you have a subscription or just love the heck out of the character you’re going to get him. If you want a defective one I’ll sell it to you. Cheap. Blech. 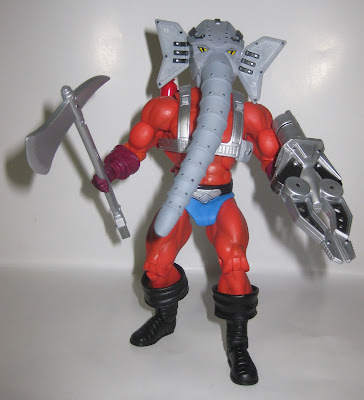