Toy Review – Masters of the Universe Classics He-Ro By Mattel 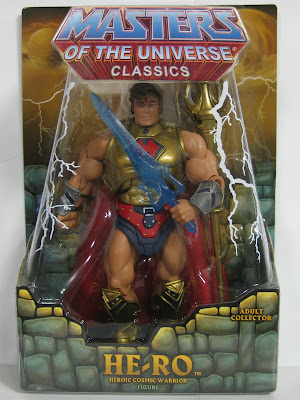 Oh, man I thought I just fucked up another toy review. I always use an older review as the format for a new one and saved my Hot Toys Alice review over the He-Ro one. Luckily I had gotten no further than the intro, so the only thing I have to rewrite is this.
Unfortunately I wrote the first version two months ago when I actually got He-Ro, so I don’t remember what the heck I said. I’m sure it was much more clever and intelligent than this. Probably my finest work ever, and instead you get this crap. Sorry guys.
Well, I probably mentioned the trick to find out what color gem you were getting before you buy a He-Ro. The super nice guy that runs one of the toy booths at Heroes Con and now at Dragon*Con told me how to do it and I appreciate it because it bagged me a purple gem, which is obviously the one I wanted. Here you go:

1)Grab a carded He-Ro (because clearly you wouldn’t have to do this for a loose one)
2)Put your carded figure in as dim a light as you can – the darker the better
3)Shine a bright light upwards through the blister’s left side (I found that the flash on my Droid X2 was sufficient)
4)You’ll be able to see the color of the gem – blue, green or purple 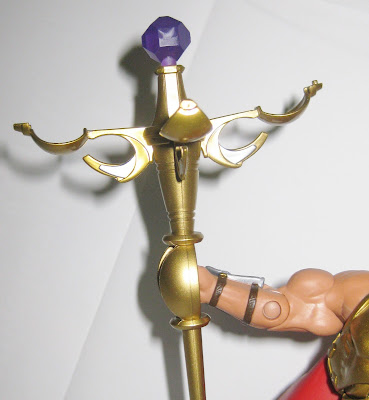 So anyway, I’m glad I got this guy and I’m even more glad I didn’t save over this review. 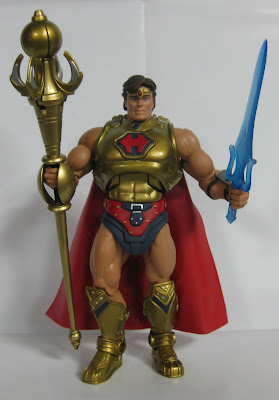 First Glance: He looks like a hero. Actually, he reminds me a lot of the Ultraverse’s Prime, who I remember more from that now-deceased comic book line’s action figures than from anything else. Where did the Ultraverse come from, anyway? Who made that stuff up? Was it a response to Image like everything else in the 90’s? 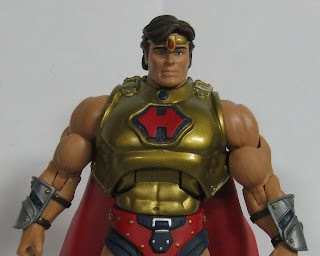 Sculpt: While he looks like your basic MOTUC human, He-Ro does have a lot of fresh parts. His head, forearms, chest plate, boots and cape were all new at the time.
Otherwise, he has all the Classics standards – ball jointed head, shoulders and hips; swivel biceps, wrists, waist, upper thighs and calves; pivot elbows, abdomen and knees; rocker joint ankles.
The head sculpt is about as average as you can get while still looking like a muscled-out freak show. I wasn’t totally crazy about the circlet on his head at first, but I’ve gotten used to it. And it does give the big guy a more singular identity.
The chest plate is unique and very cool; it resembles something from New Adventures more than the vintage line.
Same with the boots. I really dig those boots. 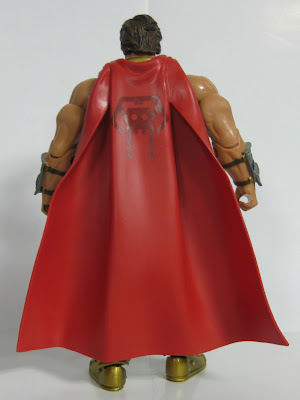 Design: The deco on this guy only adds to his heroic appearance. The red, gold, and blue color scheme is vibrant and really makes him stand out amongst the other Masters.
The head on mine is very accurate, with centered eyes, pupils and eyebrows.
The armor and boots look great and have some nice, tight detailing to accent the gold. I’m pretty sure He-Ro’s trunks are unique to him (so far) and they stand out not only for their sculpt but also for that color scheme.
As you can see, that design on the cape is nice. Just a darker hue of red, but it looks good. 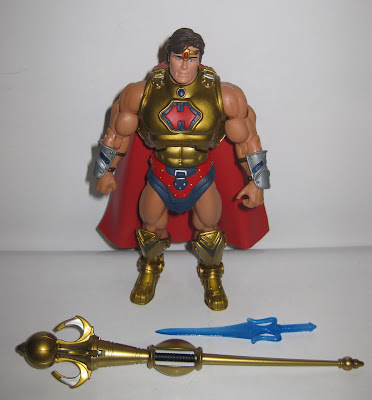 Accessories: He-Ro comes packed with his staff and a very different Power Sword.
The staff looks a bit unwieldy and maybe even flimsy on first sight, but once you play around with it it’s pretty neat. First of all, He-Ro can hold it a few different ways with no problem. The top is four pieces that open to reveal the gem inside and it actually closes much more securely than you’d think it would. It’s a nice mechanism and one of the better examples of the Four Horsemen’s adept toy engineering.
The Power Sword is the same mold as all the others, but molded in a sparkling, clear blue plastic. It looks neat, but in all honesty it’s a little sassy for me. If you know what I mean. I think a darker blue would have been cooler. 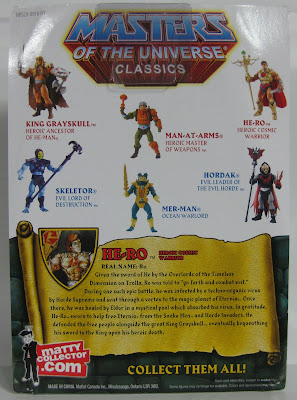 Packaging: The standard Masters of the Universe Classics packaging. It looks nice and makes the figures look even bigger than they are. You also get a bio on the back that is sort of a composite of each character’s history.He-Ro got his Power Sword on Trolla, which I think is pretty lame but is apparently standard practice. 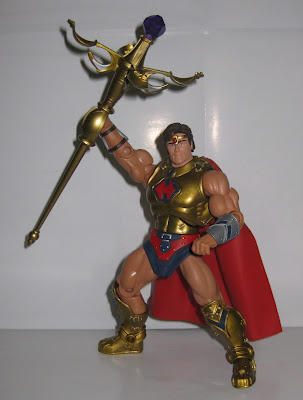 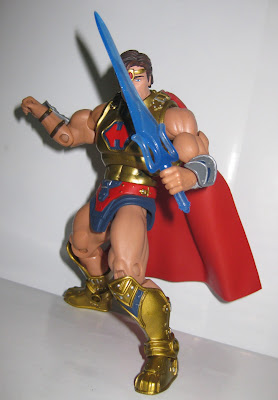 He-Ro is great and exactly what he needs to be. I’m more than happy to have him on the shelf.
5 out of 5
I can’t say this guy is an essential addition to your collection, but he is great for what he is despite what certain diminutive redheads might think.
If you’re patient you can wait and find him at a con and do the trick to see what color the gem is. If you don’t care about gem color, you can always head over to the ol' eBay.
Until next time, stay creepy
-Phantom
Posted by Phantom Troublemaker at 11:00:00 AM