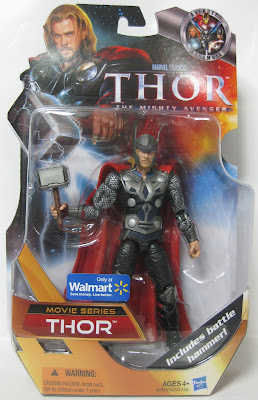 This was supposed to go up yesterday. Didn't happen because work is crazy-go-nuts right now. I worked nights all weekend and then had to be back yesterday at 1 PM to take a test so I can keep doing my job. Then I work Wednesday through Friday nights. Whee.
While I didn’t know Captain America and Nick Fury were coming out, I wasn’t necessarily surprised to see them. Thor surprised the heck out of me, I guess mainly because it is a whole separate wave as opposed to being part of an Avengers line. I suppose I thought Fury and Cap were it for now.
Even more surprising is the fact that they did what I think is a whole new Loki for this mini-wave that isn’t a movie Loki. It doesn’t look a thing like Tom Hiddleston, but it does closely resemble a piece of shit. Hasbro also re-released (or perhaps retooled or repainted) their beardy Thor for this set. I want this particular Thor, but I also want the piece of Blob that comes with the original so I’ll be holding off until I get a good deal on that one. 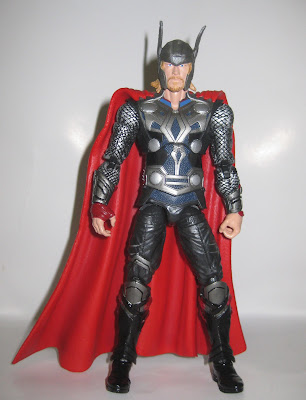 First Glance: Same packaging as Fury and Cap, which is for the best. The figure looks really good overall, but I’m not sure about the elbows. And I wish there was a helmet-less head. 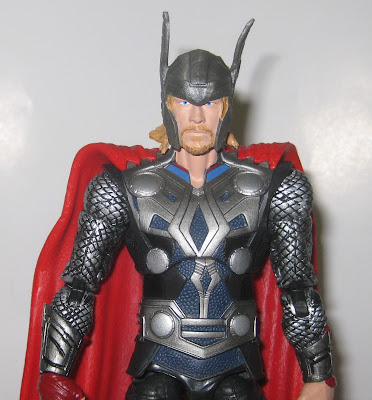 Sculpt: Thor is another entirely new sculpt obviously. The head is a good likeness of Chris Hemsworth, but I do wish it was a sturdier material. The left wing on my Thor’s helmet is a bit skewed. The rest of the helmet looks great, with a lot of detail in the engraving and the wings. The hair is also well done, as it allows for the movement but doesn’t look like it was sculpted to allow for movement. Like, it doesn’t just float around his shoulders like some of the old Toy Biz Marvel Legends’ hair.
Thor had all the articulation you could need. Ball-jointed shoulders, wrists, hips; double-jointed elbows and knees; swivel biceps. Probably more. It’s a ton. The joints aren’t all pretty. The elbows look weird and the ankles do as well, but they’re okay.
The costume looks great. I like the way his gear was done in the movie and it translates very well to an action figure. All of the details and textures are here.
The Odinson’s cape also looks great. It looks slightly windswept, but not enough that he looks weird just standing there. The sculptors hit a perfect happy medium. 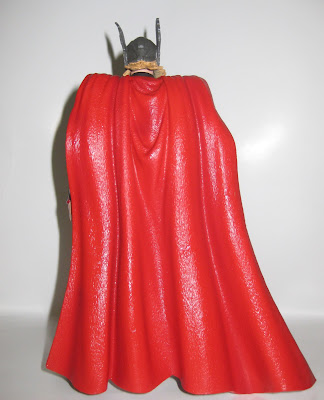 Design: The paint is a little iffy on his face, kind of like Cap’s. It isn’t bad, just not as tight as the rest of the figure.
And the rest of the figure is pretty darn good. The basic colors and glosses look great and there are enough little details that Thor really looks like a great figure. The red and silver details thrown around add a lot. And the circle things on his tunic look great, too.
My figure doesn’t have any errors to speak of and I just realized that I have never in a Hasbro review had to clarify that none of the joints are stuck. 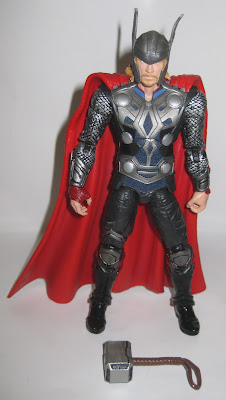 Accessories: Thor comes with a standard Mjolnir. I would have liked a helmet-less head.
The hammer looks very good, but I find it odd that Lil’ Troublemaker’s Super Hero Squad Thor has the writing on the side and mine does not. But whatever. It looks good and Thor can hold it or look like he’s throwing it, so I’m cool. 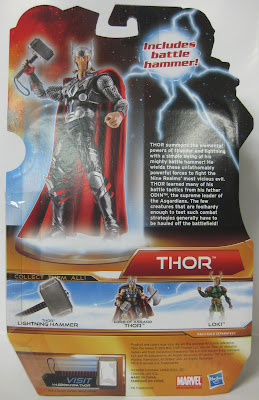 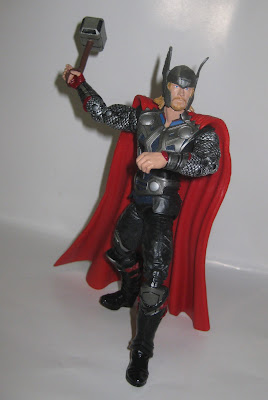 Overall: These movie figures have been great so far. I was so bummed out looking at all of the 3 ¾” figures as they came out, but now I at least have the main Avengers.
3 out of 5
The elbows and ankles are just a bit too funky to get the same score as Fury and Cap. But I still recommend you buy this Thor. 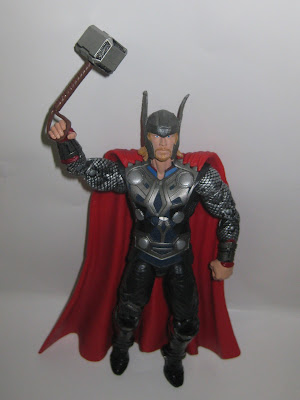 I doubt it’ll happen, but I really hope we get Sif and the Warriors Three. And a movie Loki. And Odin. And even a Natalie Portman.
Until next time, stay creepy
-Phantom
Posted by Phantom Troublemaker at 11:00:00 AM