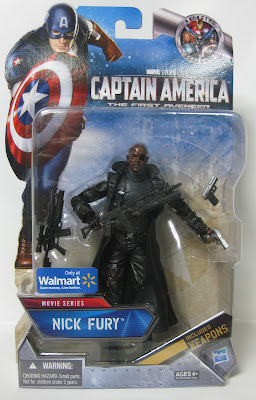 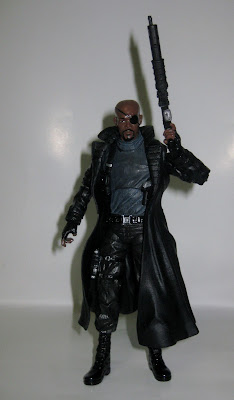 First Glance: Same boring packaging as the other Marvel Movie figures. Also, this appears to be a straight-up re-release of the Ultimate Nick Fury figure that came packaged with the WWII Ultimate Cap a couple of years ago. Which, quite frankly, is mostly fine. Because they stuck a Samuel L. Jackson head on it. 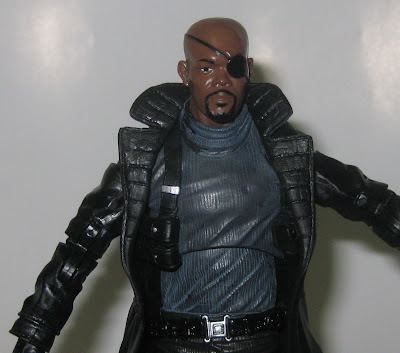 Sculpt: We’ll start with the problem here. His arms don’t go down. Fury’s coat gets in the way of the ball-jointed shoulders so you can’t pose him with his arms straight down. For some reason it didn’t bother me on the Ultimate Fury – I’m guessing because I didn’t actually sit down and review it. Actually, it isn’t so much the coat that’s the problem as the gear underneath. Fury has a very nice shoulder rig with ammo clips under one shoulder and a functional holster under the other. The thing is awesome and detailed, but I’d really rather be able to put his arms down.
Another fairly minor issue is that with the coat being a separate piece there are large holes for the arms and you can see the shirt through them. While I appreciate the fact that Hasbro wanted more layers to free up the articulation and give the figure a more realistic feel, I think I would have preferred the coat be sculpted onto the torso. It’s not like you’d really want to take it off anyway.
Otherwise Fury’s sculpt and articulation is great. He has a ball-jointed neck, shoulders, hips, and wrists. There are swivels at his biceps, and ankles, double-jointed elbows and knees, pivoting ankles, and a rocker joint on the abdomen.
While his big coat does interfere with the movement, you can still pose S.H.I.E.L.D.’s Director in a lot of different ways. Except, of course, just standing there. Still, I was pretty impressed with how much you can still move him about.
The head sculpt is fantastic. Maybe not quite as amazing as the one on McFarlane’s John shaft figure, but damn. It’s great for an actual toy line (as opposed to McFarlane’s mildly articulated statues). Easily the best of these movie figures so far. 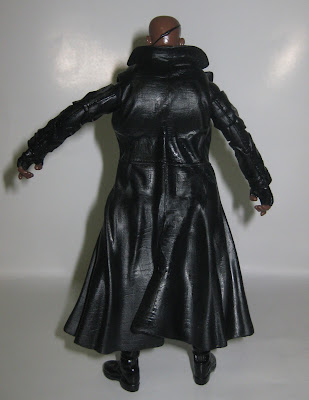 Design: Aside from the head, the big difference between this figure and the Ultimate one is the color scheme. The original is more exciting visually, but I actually like this one more.
Fury is all blacks and grays of varying levels of gloss. He also has silver buckles and catches to break things up.
The head looks good – the features have a tight, accurate deco and the paint on the eye patch doesn’t wander off anywhere else. 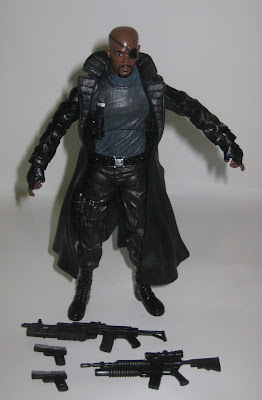 Accessories: General Fury (he is a general in the movies, isn’t he?) comes with two assault rifles and a couple of pistols. And amazingly, all of these weapons can be used on his person at once. The pistols both have holsters (that they fit in!) and the rifles can each be held in either hand.
Each gun looks very nice. The original Fury’s even had some paint on them, but these are all black. Not a big deal. They don’t look as nice, but they still serve their purpose. 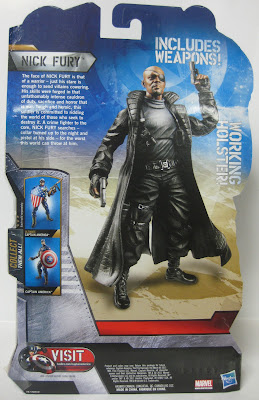 Packaging: Plain old boring blister card. It does have sort of a neat-o shape, but it just isn’t very eye-catching. 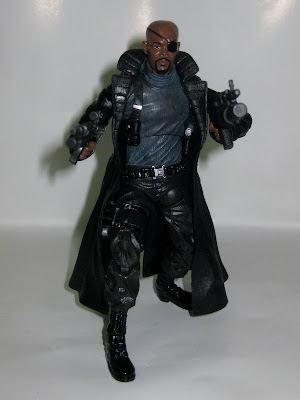 Overall: His wacky arms mean you can’t get a good group shot of the Avengers just standing around, but you can get some great action poses.
4 out of 5 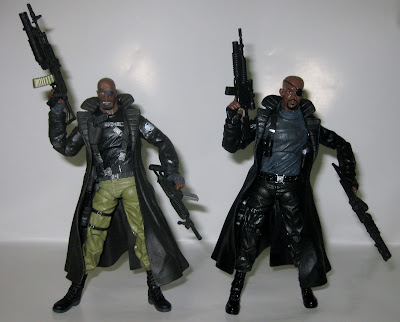 Again, this feels like a fifteen dollar action figure much more than any equivalent Mattel offerings. I am planning on cutting back a good bit on my toy purchases next year (yeah, right) and Hasbro may well end up getting my 6” superhero money. Except, of course, that Mattel is already getting some through their Club Infinite Earths.
And if you doubt my intentions on cutting back (as you should), just know that I’ve already cancelled my preorders for the Hot Toys Batman ’89 figures. I just can’t do it. I really, really want them, but I have got to draw the line somewhere. I cannot justify spending the same amount of money on two toys that I would on a weekend vacation.
Also, one of these days I am going to get motivated enough to put a ton of stuff up on eBay. It’s the ton part that’s the problem. I’m a bit overwhelmed by it all.
Until next time, stay creepy
-Phantom
Posted by Phantom Troublemaker at 11:00:00 AM