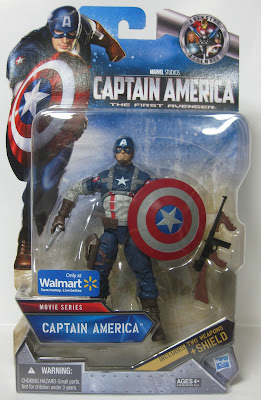 Back at Toy Fair Hasbro made the extremely exciting announcement that they were bringing Marvel Legends back. The first figure was the SDCC Exclusive Thor, which was modeled after Olivier Coipel’s artwork.
The next wave of long-awaited six inch scale Marvel figures was a series of Iron Man repaints. These were fine for what they were, but the big deal for me was finally getting movie versions of Captain America and Thor to go along with my Iron Man. I know a lot of people skip them, but I love having movie versions of characters when the movie was good (which is why I still buy Batman Movie Masters and eBayed my GL figures [I’ll never get around to it, but I have a whole new rant about how much the Green Lantern movie sucks after watching it again]).
For better or for worse the Thor and Cap movie figures are Walmart Exclusives (at least until they reissue them for The Avengers) and are apparently easy to find right now. The question is should you buy them? 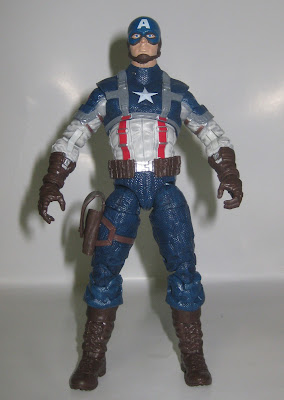 First Glance: While I find the packaging to be somewhat dull, I am also glad it isn’t some overdone clamshell you need scissors to open. The figure itself looks great. 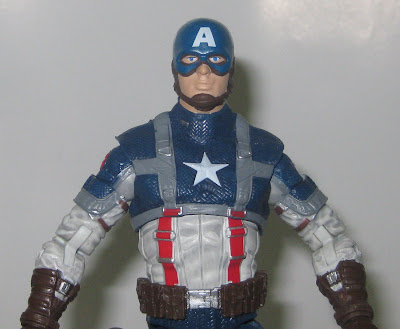 Sculpt: Hasbro has some of the best toy designers in the business on payroll and it kills me they don’t get the same kind of credit as the Four Horsemen. These people – whoever they may be – have innovated both the 6” and 3 ¾” scales of action figures more than any other entity over the past twenty years.
This Cap is a completely new sculpt from head to toe. What is visible of his face looks like good ol’ Chris Evans. The rest is the helmet and I’ll tell you something – what looked not only fine but pretty cool in the movie actually looks a little weird on the figure. Not bad, just a bit strange.
The body has a load of articulation, all blended very well with the sculpt. Cap has a ball-jointed neck and a bunch of other points that I find I really need to learn the terms for. His shoulders basically function like ball joints, but are a combination of pivots and swivels. Same with the hips. There are double-jointed knees and elbows and a rocker joint at the upper torso. His waist swivels and he has (what?) ankles and (wrists at all?).
The figure’s range of motion is pretty good, but the designers gave aesthetics and posability about equal consideration. I agree with that. For a more comic-based toy I think you can get away with more obvious joints (not that you always should), but for a figure more based in reality (or movies, as it were) I think you need to give a little more consideration to the shape of the character. So Cap can pose almost any way you want him to.
As far as the details of the sculpt he looks fantastic. All of the different textures of the movie costume are represented unfailingly, from the armor/mesh look of the midsection to the cloth of the rest of the suit. His boots and gloves even look creased and leathery. Captain America is one of those characters that is so iconic you feel like you’ve taken this figure in at a glance, but once you get him in your hands there is a lot to look at and appreciate. 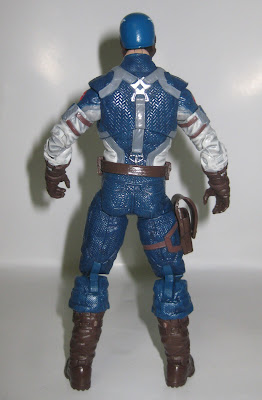 Design: Obviously the color scheme is accurate. Everything matches up with the movie look. The apps are tight and realistic, with details like straps and buckles looking great. The “A” and the wings on the helmet are well-placed and clean. The paint on the face looks fine, but could have maybe used a bit more shading to look really great. 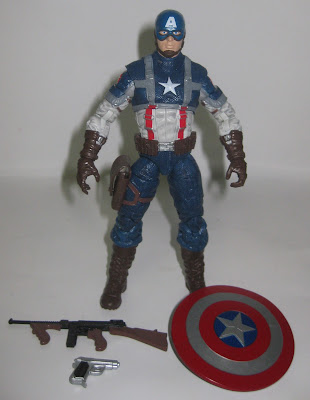 Accessories: This Captain America comes packaged with his shield, machine gun, and a pistol. The pistol look just fine and fits perfectly into his holster or in Cap’s right hand. The shield looks fantastic. It’s nice and thin and has a slight metallic finish to it. It fits on the figure’s arm very well, but lacks the shoulder straps some of the other Cap figure’s shields have sported. I really don’t mind as I plan on displaying this Cap holding his shield anyway, but it might bother you. 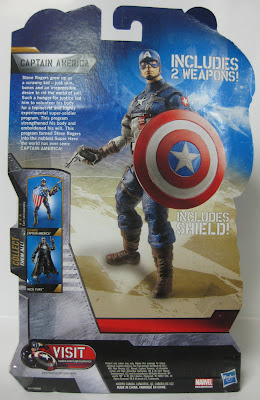 Packaging: Plain old boring blister card. It isn’t going to catch anybody’s attention, but collectors will know to look for it. Now that I think about it, though, maybe the plainer packaging on these isn’t such a good idea. I didn’t know these (or Thor) were coming out and I almost overlooked them because the packaging is so plain. Other people who aren’t as toy-crazy as me might be so inured to the Walmart toy aisle that they miss these great new figures thanks to their dull packaging. I dunno. 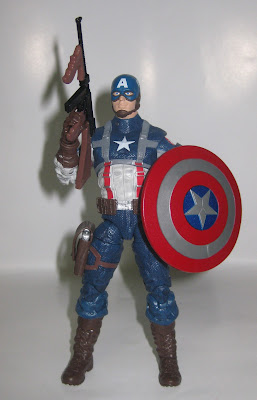 Overall: I’m very pleased with this guy. I can’t say he’s perfect, but he’s darn good.
4 out of 5 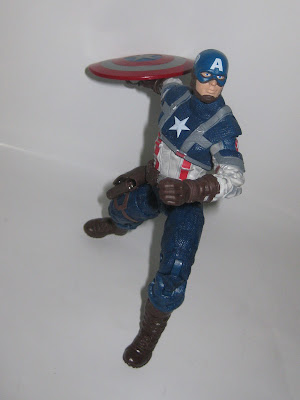 I have a whole lot less trouble paying fifteen bucks for Hasbro’s six inch figures than I do DC’s. I’m not going to lie – Hasbro’s stuff just looks like a whole different class of toys. Granted, Mattel’s Movie Masters would be a fairer comparison for this particular figure and those come closer to measuring up (though they still don’t), but once we’ve got the full-on Marvel Legends line back in stores I think the DC All Stars (as Mattel’s relaunch of the line is being called) might be in trouble. 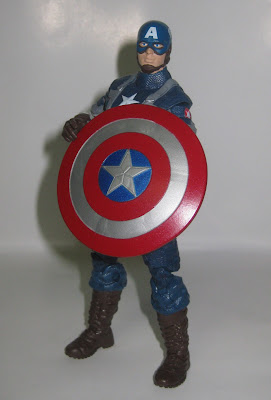