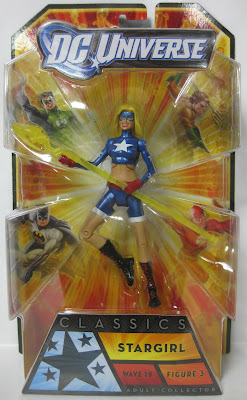 I don’t necessarily have any attachment to Stargirl, but I like the character on Smallville and have both of the Starman figures that Mattel released. So I needed her too, right?
Actually, now that I think about it she was really funny on the Justice League cartoon too. So maybe this was a more sensible purchase than I thought. Unfortunately, along with that thought comes the realization that I wouldn’t mind having S.T.R.I.P.E. (man, that is a pain in the ass to type) but do not want the rest of the figures in this wave. Well, maybe Lord Naga. And I guess I wouldn’t mind that Atom even if he is too tall. But I definitely don’t want that weaksauce Hawkman. Or Magog. Blech. Boo-yah, indeed. 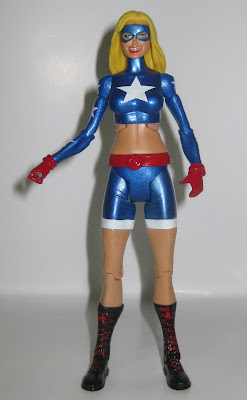 First Glance: She is dressed so goofy. And out of all the heroes they showed on Smallville, Stargirl and Hawkman are the ones they got exactly right? 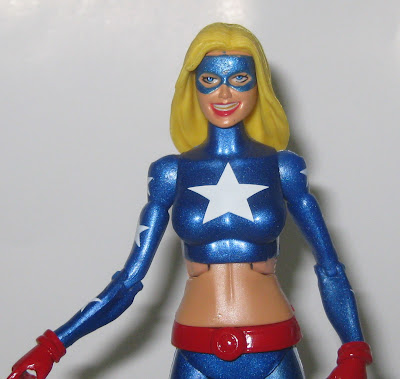 Sculpt: Thank goodness Mattel has (apparently) abandoned that crappy non-joint they used on Star Sapphire’s abdomen. That thing was such an eyesore.
Stargirl has the standard DCUC articulation with no double joints. All of the joints on mine are tight and mobile, so no complaints there.
The actual sculpt of the figure is very nice. The head is outstanding, as a matter of fact. The hair and mask look great and the expression on her face is just awesome. She looks like she’s just thoroughly enjoying some adventure or another. It’s almost cheeky. This is one of my favorite head sculpts on any DCUC figure.
Mattel could have easily reused the gloves and boots from an old Supergirl for this figure, but they didn’t (check this). Both look very good and have the right details to stand out as new pieces.
Her shirt looks like it should and her shorts, while looking a bit generic, look right. Especially once you factor the belt in.
The problem – once again – comes in after the design is done. I have run out of profanities and insults to describe the individual(s) that determine how Mattel’s products are going to be packaged. They fill me with so much rage and disdain, but I am left mentally sputtering trying to come up with new ways to talk about them. What more is there? How many products can these morons ruin? Will this idiocy continue into the forthcoming All-Star line? Will it be present in the Club Infinite Earths figures?
And yes, I understand that I can boil every fucking toy I buy from this stupid, stupid company but I should never, ever have to do this. I should be able to open a toy and put it directly on the shelf for display in whatever pose I can wrangle out of it. There should be no boiling, freezing, painting, x-acto knifing, or any other kind of post-production altering. Aside from straight-up customization these figures should not need any kind of adjustment from me. It drives me insane that there are people out there who think it’s okay to have to boil your action figure after you buy it (yeas – I know some of you are just offering solutions, not excusing this).
But holy crap, Mattel (and Hasbro – you guys are guilty of this too). Get your fucking shit together.
Oh, I almost forgot to even mention what the problem is this time. Stargirl’s right arm is so badly skewed by the way she was packaged that it looks like she has been taken over by The Thing. I’ve never seen a figure so badly warped. The stars on her sleeves don’t even line up it’s so bad. 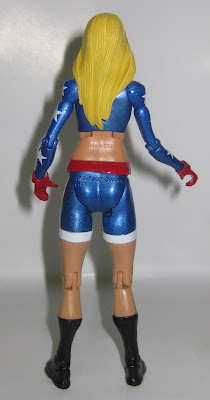 Design: I don’t often have issues with Mattel’s paint apps, but Stargirl just isn’t very good. The first problem isn’t an app so much as it is a baffling production choice more along the line of how Hasbro likes to screw things up – Stargirl’s hip pegs are flesh colored. It’s not immediately apparent, but it is pretty terrible:
Stargirl’s colors are good and accurate as the figure is designed. The metallic blue is very nice and the reds and whites look good. Her boots with the red laces are solid as well. Her face, hair, and mask are also painted accurately. Unfortunately, my figure has a lot of paint slop. There are spots on her face and a few on her torso. And her left shoulder has some crackling. That’s another one of those things that isn’t such a big deal on its own but when you add everything up it becomes more significant. 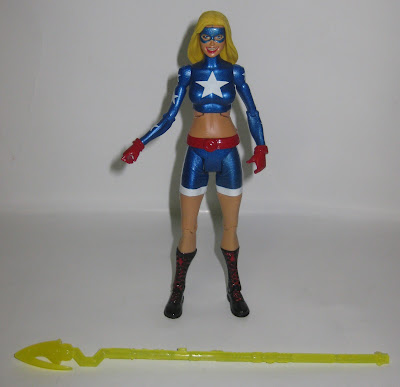 Accessories: Stargirl comes with her staff and S.T.R.I.P.E.’s left arm.
I think it’s neat-o that the staff is clear and “powered-up” because I am, after all, a sucker for translucent toys. But I also kind of don’t like it. I would usually prefer an item be in its default mode. I know we already got that with the modern Starman figure, but would it have been so crazy to provide two staffs with Stargirl (well, obviously yes)?
But the staff does look good and amazingly her tiny, slightly warped hands can hold it fairly well. 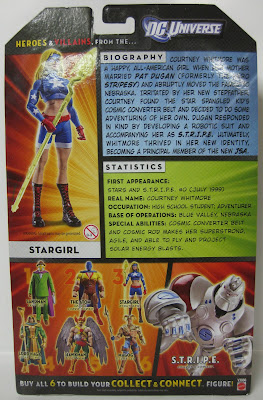 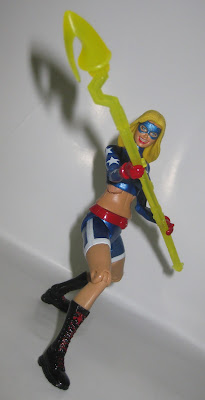 Overall: This is another mess of a figure. While taking the pictures for the article I realized that her right arm is not warped, it’s on backwards. The stars are painted on the inside of her arm. Idiots. Between that and all the sloppy paint on her face and the red blotch on her side this is another fail that should have been an easy pass.
2 out of 5 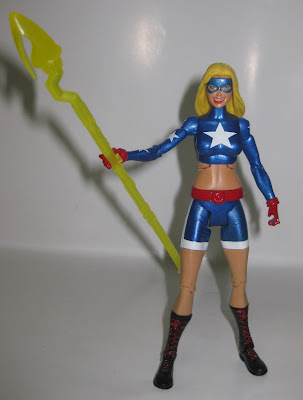 I might try and exchange this one for a better one. Maybe not, though because Evil and Monkey both said theirs are screwed up in different ways from mine. These last few DC releases from Mattel have me seriously questioning the wisdom of my decision to subscribe to Club Infinite Earths next year.
Until next time, stay creepy
-Phantom
Posted by Phantom Troublemaker at 11:00:00 AM