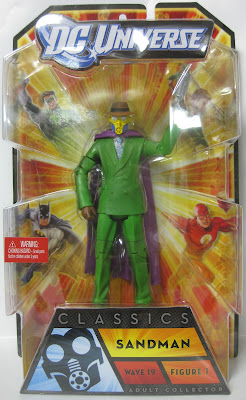 I am not a huge fan of the Justice Society of America. It’s not that I have anything against them , I just haven’t read any of the comics. I’ve got several of the DCUC figures, but mostly because I got them on clearance. Although I did pay full price for Alan Scott just because I thought he looked really cool.
But Wesley Dodds is a whole different story. Like many people my age, my first exposure to the Golden Age Sandman was through Neil Gaiman’s amazing and near-flawless Sandman comic. Mentioned only briefly in the first story arc (though I think he was tied in again from time to time), the image of the man with the ominous gas mask and the gas gun that put criminals to sleep rather than killing them was stamped on my mind. I would see Dodd’s likeness pop up from time to time in other comics and even picked up a couple of other books featuring him. I never got attached enough to follow the character, but when I saw this figure in his original purple and green colors I had to have him. 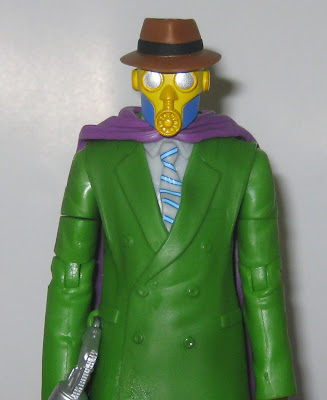 Sculpt: Sandman is a very basic figure, despite being so recognizable. He’s a guy in a suit. Yeah, he has a distinctive mask and wears a cape, but essentially he’s just another guy in a suit. Thankfully, the Four Horsemen were clever enough to make him distinctive from other guys in suits like the Question and Two-Face.
First there’s the head – the most obvious difference. The gas mask looks fantastic. All of the lines and details are sculpted in – none of them were left to paint alone. The hat is a separate piece that is permanently attached. Because of this it looks much nicer than if the head and hat were all one piece.
His suit is very well done. The Horsemen used a good mix of materials to achieve solid articulation and a consistent look. The body of the jacket is a firm but flexible material that allows the hips, waist, and even the torso joint a nearly full range of motion. The shoulders are the standard ball-joint analogs, but cut to look like a jacket. I love this guy’s tie. Rather than just a piece sculpted on his chest it is a separate piece lifted up slightly so that it looks like a tie in action rather than just sitting there. It’s a nice touch and it reminds me somewhat of Playmates’ old Dick Tracy figures, which looked goofy but were a whole lot of fun.
Sandman also has a little loop sculpted onto his right jacket pocket. You can hang his gun here. It’s neat.
My only complaint with the articulation is the ankles. Mattel’s suited figures all have those ugly pegs on either side of their pants cuff. I would rather that peg not be there than have the minimal range of motion that the feet have. Being able to move Sandman’s feet ten degrees in either direction is not enough benefit to make up for the unsightly pegs marring his pants.
Mr. Dodds’ gloves and shoes look great. They have a very leathery texture and are more detailed than you might expect. I criticize Mattel’s DCUC line for a lack of detail sometimes, but then I sit and take a look at a figure like this – a representation of a comic book character – and realize they’re as detailed as they need to be.
Sandman’s cape is also a separate piece and looks great. You could actually even remove it if you really wanted to.

The only fail that is directly from the Four Horsemen’s work is the fact that Dodd’s left hand was sculpted to hold the gun. I actually wasn’t even positive this was wrong, but I looked it up and couldn’t find a single depiction of Sandman holding the gun left-handed. It’s a pretty stupid mistake to be quite honest. I mean, it isn’t brown hair on Barbara Gordon, but it still shouldn’t have happened. And he can hold the gun in his right hand, but it is a lot tougher to get it in there.
My main problems with this figure are all things that happened after the Horsemen were done, which is par for the course with the idiots at Mattel. The adhesive used to close his jacket was sloppily applied and is painfully visible. His thighs were not pressed together firmly enough and have visible openings at the seam. The right one is particularly bad. There is also adhesive visible here. We’ll get to more under design.

Design: The colors used are vibrant and appealing (to me, anyway). The paint apps on the mask look great and the detail is very well done. Same with the tie. The suit and cape are very basic, but that’s all that was really needed.
I have a very minor issue with the colors, but it is compounded by the other problems with the figure’s post-design execution. The thighs are a very slightly different color than the rest of the suit. There are other figures that have had this problem and it hasn’t bothered me a whole heck of a lot, but when combined with the visible adhesive on the jacket and the assembly gaps it bugs me. A lot.

Accessories: Sandman comes with his gas gun and S.T.R.I.P.E.’s right leg. The gas gun is sculpted nicely, but is made out of rubber. Boo. I really wish toy companies would stop doing this. The little hook on the stock fits nicely into the loop on his jacket. 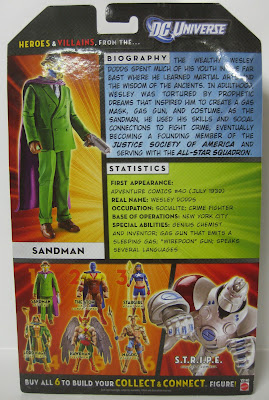 Packaging: Your standard DCUC blister. A little too big still, but fine. I’m very curious to see what the new line is going to look like. I hope it isn’t as complex as the Batman Legacy stuff. 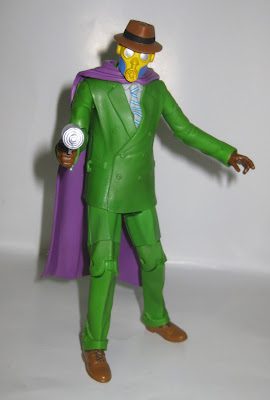 Overall: The problems with this figure irritate me a lot, but oddly less than warped limbs. I mean, Sandman is technically defective, but at least nobody can claim, “Oh, just boil him for a few minutes!” and act like that’s okay (sorry, Toybox – I had to take the shot!).
3 out of 5 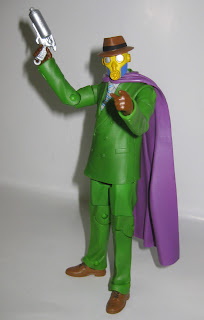 The bottom line is that those flaws are not obvious when Dodds is just standing on the shelf, as opposed to Barbara Gordon who looks like she should be in a wheelchair. I’m okay with this figure, but extremely dissatisfied with Mattel’s quality control. There’s a manager somewhere that needs a few lashes.
My Sandman just came from BigBad, so this wave will probably hit retail in a couple of weeks in the parts of the country that are not Georgia. We’ll probably see them here in March.
Until next time, stay creepy
-Phantom
Posted by Phantom Troublemaker at 11:00:00 AM