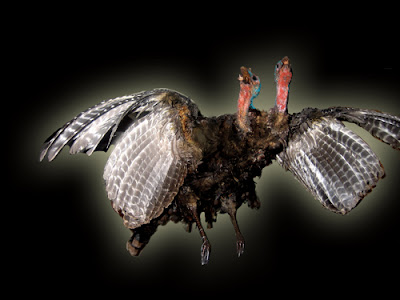 This was supposed to go up yesterday, but more important things took precedent.
Last year on Thanksgiving I did a little arts & crafts project to represent how I feel about the holiday. This year I am going to try and do something a little more significant. Not because I feel any differently about things – if anything I like it less now – but because I am at work on Sunday night and need something to do to distract me from thoughts of whether or not the fall from the top of this building would kill me (it wouldn’t).
Also, I really don’t feel like reviewing toys right now. I have a Thor review that I’ve been screwing around with for over a week now (though I did manage to finish it and put it up Monday) and I have hit a real problem with my review of Hot Toys’ Alice from Resident Evil. There are some big problems with parts of the figure and I don’t want to sit down and talk about them. I absolutely love the figure except for those things, but those things are pretty big fails.

So right now I’m going to sit here and talk about things I’m thankful for. Because while I may not want to spend a whole day with my extended family eating copious amounts of food and watching football to celebrate the white Christian man’s dominion over America, I do want to acknowledge the higher power I believe in and be thankful for the good things I have in my life.
As such, this first part is going to be a little serious. If you want content more along the lines of my normal stuff just scroll down a bit.
I am thankful for my family. My son, my wife, our primary dog Otis, and even our auxiliary dog Evie. Every one of them make my life better in some way and I don’t know what I would do without them. Every minute I spend with my son is a gift. He is the very best thing I have ever had anything to do with and I thank God every single day for him. I wouldn’t change anything about how I live.
I am thankful for my friends. I have this unbelievably cool circle of people that are always great to be around. I am as happy and comfortable with the friends I have as I am with myself. There isn’t anything we can’t get together and make into a party.
Much as it pains me to admit it, I am thankful for my job. It is horrible and sucks a small piece of my soul away every single day, but it pays the bills and keeps a roof over our heads and toys in the house. I am very fortunate to work where I do.
I am thankful for the fact that I keep meeting cool people who enrich my life.
I am thankful that I am getting sixteen extra hours of overtime this week. Not only is it going to pay for Christmas, it’s also giving me time to get ahead on my writing.
Speaking of which, I am thankful for inspiration. I am working on a couple of things now that I never would have put the time or effort into without that inspiration. My passion to create has been stoked and that hasn’t happened in a very long time. I know I write all the time, but this is a different thing entirely. It’s thrilling.
I am thankful that I live in a world where Guillermo Del Toro has cast Charlie Day in a movie about giant monsters fighting giant robots.
I am thankful that Marvel was savvy enough to hire Joss Whedon to make The Avengers and so far it looks like I was totally wrong to doubt the man.
I am thankful for American Horror Story and Ringer, two excellently smutty shows that are keeping actors I like doing great stuff. I want everybody to at least give American Horror Story a try. It’s an amazing show that surprises me every single episode and is good enough that I’ll be buying it when it comes out.
I am thankful for Big Chief Studios’ 1/6th scale figures of the Doctor and Amy Pond. They look absolutely stunning and cost less than Hot Toys’ figures.
I am thankful that the new Green Lantern cartoon is great so far and in the first ten minutes told a more economical, cohesive and complete story than the live-action movie did in an hour and a half. I still like Ryan Reynolds, but that movie was utter shit.
I am also thankful that Young Justice is so good. And I guess I can deal with Robin’s voice.
I am thankful for Rick Remender, Scott Snyder, Paul Cornell, Kieron Gillen, and Peter David for writing comic books that force me to show up at the comic shop every single Wednesday if I can make it. Those guys have given me a thirst for comics again.
I am thankful that I was able to get Dragon*Con off next year. No, seriously – it’s a big deal. Now I’ve just got to hope I can get HeroesCon and Days of the Dead off. Priorities, people.
I am thankful for my neat-o Droid X2. I don’t know how to use half of the shit on it, but the stuff I can use is just great.
I am thankful that B98.5 does eighties-only weekends from time to time. I used to loathe 80’s music but now I find it oddly comforting. I don’t know why. I just wish they would stop doing their 80’s and 90’s weekends. 90’s pop music is fucking terrible. But anyway, the 80’s weekends make it easier on me when I have to work.
And lastly, I am thankful that this final paragraph gets me to 1,000 words because it means I can stop writing now.
Happy Thanksgiving, Phantomaniacs!
-Phantom

I know things are tight this time of year, and I'm not ever big on being sincere. But an incredible person has passed away. His family needs help with medical bills. I can't tell you what kind of impact this man - who was just a kid when I knew him - had on my life, but I wouldn't be the person I am today if I hadn't known him. I believe every person who ever met Glenroy Walker was richer for the experience. He leaves behind a young wife and two kids.
I know most of you guys don't know him, but know that he contributed to who I am and if you've ever laughed with me or at me or enjoyed anything I've done, just send a couple of bucks this way. I'll never ask you for money for me, but this is important.
This world is poorer for his absence.