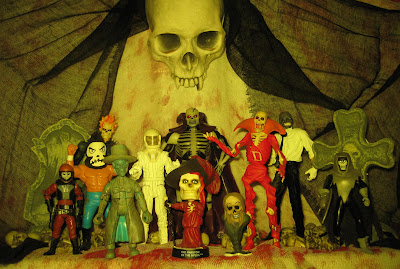 “31 Days of Halloween” is technically a big fat lie since I only post Monday through Friday. But “21 Days of Halloween” just doesn’t sound as spooooky. And I am aware that the SyFy channel uses the same name for their annual offering of Halloween-oriented programming, but I was using it before they even existed. Well, before “SyFy” existed anyway.
For the past three years I have spent the month of October torturing myself by trying to come up with a month’s worth of Halloween-oriented content. While X-Entertainment.com does a much better job of it, I hope maybe I can entertain a fraction as well as that guy. As for this first entry, I have absolutely nothing to talk about other than wanting to start the month of creepy posts off.

And then there’s the Atlanta Zombie Apocalypse. My favorite event in the world is Dragon*Con, followed closely by trips to Walt Disney World. But an easy third is this immersive horror event that started just last year and changed the way everybody who experienced it thinks of Halloween attractions. I cannot overstate how amazing AZA is. I don’t want to get too deep into it here because I did a review last year and I’ll be doing another next week, but just know that if you can make it you must go. There is nothing else like it. It’s a trip through a living horror movie.
And there’s also Atlanta’s own Chamber of Horrors. Me, Darth Pete, and Evil got a special preview tour of this gruesome walk-through back in July and I can’t wait to see it in action. We might make it to this one after our trip to AZA, but we also might just do it after the PCW show on the 20th.
Speaking of which, I highly recommend you go to The Masquerade on October 20th and see Platinum Championship Wrestling. It’s not exactly subject matter that’s specific to Halloween, but it is a great time. You can always check out the Chamber of Horrors afterwards or if you’re lucky there might even be another amazing after party.
Speaking of parties (my segues are ON FIRE!), we’ve got Lil’ Troublemaker’s fourth birthday which should be a lot of fun and that Halloween party. Among our group of friends somebody always has a Halloween party and a Christmas party. And I’m always working. And that sucks so bad because I love Halloween and Christmas and want to celebrate both in every way I can. But this year I happen to have the weekend of the Halloween party off and I am stoked. I’m even going to have an actual costume that isn’t just a mask. Heck, Mrs. Troublemaker’s even wearing a costume and that is definitely not her thing. I’ll probably still miss the Christmas party, but at least we got something.
And just so I don’t end this thing talking about a Christmas party; I’ll give you a look at some of the things coming up here on Needless Things.

Oh, I almost forgot – Splatter Cinema at the Plaza Theater. I think I have too many schedule conflicts to get to any of these, but you might want to check out one or more of their excellent movie nights:
-10/4 & 10/7 – Night of the Comet brought to you by Atlanta Zombie Apocalypse
This is a shared favorite of mine and Mrs. Troublemaker’s. I really wish we could make it to this one. But you should definitely go – you could even win tickets to AZA at Tuesday’s show and those things are thirty bucks apiece (and worth every penny even if you do have to pay).
-10/11 – Evil Dead 2
Shit. This is my favorite movie sometimes (it rotates between this and Big Trouble In Little China). I really want to go to this one.
-10/21 – Zombie
Another classic. Splinter to the eye, anyone?