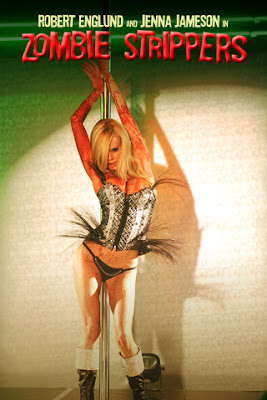 Note: I did not have time to finish my Atlanta Zombie Apocalypse review the way I wanted to. Not only was I way too busy to complete it, I also had a great idea for the post that is going to take me a night at home to complete. I promise it’ll be worth the wait.
So in the meantime, here’s a decent review of a shitty movie.
This was actually written months ago. I sat on it this long with the intention of taking pictures during a second viewing to go along with the review. As time passed, the idea of watching this movie again became less and less appealing. So – sorry, but no pictures for you.
I finally watched this movie on Netflix the other night after the wife kept insisting that I needed to. It stars Jenna Jameson as a Zombie Stripper, Tito Ortiz as a cowardly bouncer, Robert Englund in what might be his best performance as somebody who isn’t a roasted pedophile and a bunch of absolutely terrible “actors”. I thought Zombie Strippers featured a bunch of porn stars, but porn stars are better actors than the cast of this movie. I mean, seriously – when Robert Englund appears to be slumming you know you’re dealing with a whole new level of suck.
Actually, my favorite character was the woman who appeared to be in charge of the strippers. She had this outrageous Eastern European accent and was immensely entertaining to listen to. I can just imagine her conversation with the director:

Porn Lady: “Hey! You should let me do all my lines like that lady from the moose cartoon!”
Director: “Okay. Whatever.”
Porn Lady: “Super!”
I also enjoyed the work of the Requisite Generic Goth Girl. She was as close as any of the cast got to actually being physically appealing.
Zombie Strippers did have pretty good makeup effects. There were a lot of interesting designs that felt fresh compared to a lot of the zombie stuff we see now. It seems like the lazy “paint them grey” approach is kind of common now. It was nice to see a guy walking around with his jaw hanging off the bottom of his skull. And now I feel weird for typing such a thing.
The story was beyond retarded, but if you expect any more than that from a movie called Zombie Strippers you’re an idiot. The setting is an alternate America where Conservatives are in charge and have made everything horrible. As opposed to the fine economy and great health care and debt-free nation and low taxes and excellent education and awesome foreign relations and cheap gas we are experiencing now. Naturally, the Conservative Regime has outlawed nudie bars. I suppose this actually could happen if the wrong bible-toting nuts ended up in charge, and that really would be a nightmare.
The action begins in a place that looks exactly like the Atlanta Zombie Apocalypse and involves a team of supposedly military people killing zombies. This is easily the most laughable military team I have ever seen in my life. John Candy and Eugene Levy were more threatening in Armed and Dangerous. After a solid eighty minutes of gut-wrenchingly awful macho grandstanding (and I like macho grandstanding) the “soldier” who sucked the most (this was a hard determination to make, and only became apparent after he got bitten by a zombie and ran away to hide in a strip club) got bitten by a zombie and ran away to hide in a strip club. I’m not sure how he managed to hide in a room that appeared to be no more than twenty feet wide, but he did. Then he died and bit Jenna Jameson who immediately turned into a zombie. The clever (?) twist here was that the Zombie Strippers not only retained their ability to speak and reason (well, as much as any stripper can); they also became better strippers. I think it has something to do with the fact that strippers are already dead on the inside. Dads – hug your daughters. Daughters – learn to type. 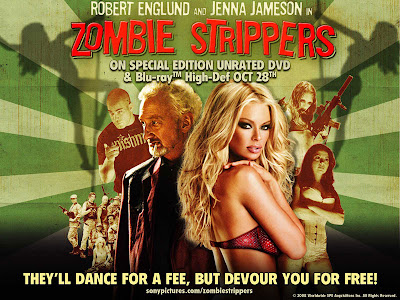 Robert Englund plays the owner of the strip club and I think he’s just great. He’s scummy and greedy and is a germophobe. I don’t think they utilized that last aspect nearly as well as they could have. I mean, there were a couple of bits but they could have done so much more. Which kind of sums up the movie. We’re shown what kind of greasy scumbag Englund is when he offers the customers “Face Dances” without mentioning it to the strippers beforehand. For some reason this offends Requisite Goth Girl. The customers are the ones who should be offended. I know I may be unusual in this, but you couldn’t pay me to let some random stripper rub her labia all over my face. Not my thing.
Anyway, after the audience in the strip club loves Zombie Jenna Jameson and showers her with at least twelve dollars in ones Englund decides that Zombie Strippers are great. Even though Zombie Jenna Jameson eats one of the customers. This leads to strippers volunteering to get bitten and turned into Zombie Strippers just so they can make all that sweet, sweet college money, too. This is easily the cleverest thing in the movie, to the point where I am dubious as to whether or not the creators were even aware of the message.
There was an outstanding fight scene at the end between the two hateful shrews who were fighting throughout the movie over who should be leading all of the strippers. Zombie Jenna Jameson shot various kinds of objects out of her Zombie Twat while Zombie Other Porn Star dodged them. Eventually Zombie Jenna Jameson got lucky with her Twat-o-matic weapon and nailed the other slut in the gut. This sent her flying though the air and onto the stage in a very cartoonish moment that was better than this movie deserved. Seriously – I remember thinking, “Wow. That was actually pretty funny and cool like a Takashi Miike movie.”
Everything gets wrapped up when the idiots from the beginning of the movie show up at the strip club for some reason and shoot all the zombies. It turns out some scientist infected people on purpose because blah, blah, blah. It doesn’t matter.
This was a terrible movie. It had some entertaining moments, but it would have been better as a porno. The production quality and acting was so terrible that I kept expecting people to pair up and fuck at any moment, but this is a regular “movie” so it never happened. I’m not really saying I want zombie porn (Hardcore Zombie Action), but with all of the Porn Parodies out there I can’t imagine why Zombie Strippers should exist as anything but an “Adult Feature”. It certainly doesn’t accomplish anything as a standard release. Blech.
2 out of 5 Pool Balls Shot Out of Zombie Jenna Jameson’s Coochie
31 Days of Halloween vs. 31 Days of Halloween!
11:00 AM – 7:00 PM – Moonlight – I kind of wish this was Moonlighting.
Halloween score – 4
Quality score – 3?
7:00 PM – 9:00 PM – Seconds Apart – Starring Orlando Jones versus some creepy, telepathic twins. Probably not good, but it might be fun.
Halloween score – 3
Quality score – 2
9:00 PM – 11:00 PM – Fertile Ground – This sounds exactly like The Messengers. I wish it were called Ghost Farm.
Halloween score – 4
Quality score - 2
11:00 PM – 1:00 AM – Population 436 – Fred Durst is in this movie, but don’t let that dissuade you. Mrs. Troublemaker watched this one and liked it.
Halloween score – 4
Quality score – 3
1:00 AM – 3:00 AM – Friday the 13th: The Series – Hooray for more of this!
Halloween score – 4
Quality score – 4
3:00 AM – 5:00 AM – Clive Barker’s Books of Blood – Wait, what? This is a movie? I assume it can’t possibly be good because I wasn’t even aware of it, but maybe I’m wrong. DVR is set.
Halloween score – 5
Quality score – Hoping for 4, expecting 2
5:00 AM – 8:00 AM – Paid Programming
Halloween score – 0
Quality score – 0
8:00 AM – 11:00 AM – Ghost hunters – Doesn’t this channel play this fucking show enough already?
Halloween score – 4
Quality score – 1
Until next time, stay creepy
-Phantom
Posted by Phantom Troublemaker at 11:00:00 AM