And I mean that with the utmost respect. But these are ten movies that – while I love them – are just fucking retarded.
Whether it’s the acting, directing, story or just the whole thing is a fucking mess (see #1); these movies all posses at least one dominating factor that makes them absolute garbage. Some of them are awesome because of that, others are just awful. But they’re all dumb.

An American Werewolf in Paris (Theatrical Trailer) by NakedBrotha2007
10 – An American Werewolf In Paris
I hate to start this thing off having to bullshit, but I'm going to anyway. I don't honestly even remember this movie all that clearly, but I remember hating it after watching it with an old roommate. She hated it, too and we sat there afterward and talked about how fucking stupid it was for longer than the movie had actually lasted. So while I can't give you anything specific, I can assure you this is one stupid damn movie.
9 – The Blair Witch Project
Maybe if I had seen this movie under different conditions I would have a different opinion of it. But the first time I saw Blair Witch it was presented to me as the producers were originally marketing it – as a piece of legitimate found footage. It was one of the first examples of viral marketing and is impressive for what it was (the marketing, not the movie). A “bootleg” copy (on VHS, no less) found its way into my old guitarists’ hands. He had been following the Blair Witch “story” on the internet – still a mysterious and weird thing to me at the time – and was fascinated. So when I first watched it I thought I was watching something that was supposed to be real and that illusion started to crumble about ten minutes in. By the time the idiots in the woods are crying into the camera but still filming when their lives are supposedly in peril the whole thing had gone to shit for me. I wonder to this day if I would have a different perspective if I had gone into it as just a movie, but as things stand this is just a dumb movie featuring dumb characters doing dumb things.
Oddly, I rather enjoy the sequel.
Note: This guy also put a bootleg copy of The Matrix in my hands a few months before it hit theaters. I watched the first ten minutes or so and stopped it because I knew I was looking at something special and didn’t want this grainy, shaky version to be how I experienced it for the first time. To this day I still won’t watch bootlegs because of those two experiences.
Note #2: I was going to put Paranormal Activity here, but I didn’t feel like it was quite as dumb as Blair Witch. It just featured a couple of assholes.
8 – Darkness Falls
Originally called Tooth Fairy (no relation to the excellent Duane Johnson vehicle from Disney), this piece of crap sticks out in my mind for helping to kill McFarlane Toys’ mostly excellent Movie Maniacs line. A figure of the movie’s evil antagonist was released as part of the line’s fifth series. Aside from being fairly dull and uninspired, the figure’s main issue was that the movie got delayed severely and the toy came out almost a year before the film was released. Which meant nobody gave a shit about that character even if they did know what movie it was supposed to be from. I remember that stupid thing warming pegs for months after the movie actually came out. I was a huge sucker for Movie Maniacs and the only figures from all seven original series that I did not buy were this one and the Blair Witch.
The true tragedy of Darkness Falls is not that it isn’t scary or that it doesn’t make a lick of sense, it’s that it stars the talented and extremely hot Emma Caulfield; who clearly deserves better.
7 – It’s Alive
I’m not referring to Larry Cohen’s classic from 1974, but to the remake from 2008 starring the fascinating Bijou Phillips. This movie is so utterly retarded that I had to break from my “No Spoilers” rule to review it long before I officially broke from my “No Spoilers” rule more recently.
Here’s the review.
6 – Dial Help
You may know Ruggero Deodato from the charming family film Cannibal Holocaust, but the first experience I ever had with the Italian “director” was this wretched turd. It’s about a dumb model who’s being haunted by telephones. In this movie telephones are killing people, fish, maids, and more. But it all make sense in the end because the telephones are being controlled by a room full of fucking pigeons.
5 – The Final Destination
We all know that most big horror movie franchises get progressively worse as the series goes on. Sometimes they even get so ridiculous they make the full swing back around to awesome, like what happened with Jason Goes to Hell and Jason X. But with the Final Destination movies they managed to squeeze three pretty good movies out before hitting a dud. The fourth entry felt like it was almost good enough to be a SyFy original movie, but not quite. Despite being a huge fan of anything Rube Golderbergian, I found the deaths in this one absolutely ridiculous and the characters more so. The movie is so base and uninspired it relies on the death of the stereotypical racist redneck within the first quarter hour just to elicit a cheap pop from the audience. I’ve heard the fifth movie is significantly better, but The Final Destination is just dumb.
The Undertaker and his Pals 1966 Horror... by chikungfu
4 – The Undertaker and His Pals
So this undertaker and his two restaurateur friends (or pals, if you will) are seeing a slump in business so they decide to help each other out by killing townspeople. The guys serve up a delicious new dish in their restaurant that’s a hit with everybody due to its exotic qualities and the undertaker is getting all kinds of business from burying the leftovers. The movie involves a lot of running around the same set and horrible acting. I found it so charming that when faced with choosing one of three gigantic Misfits posters years ago I went with this one: 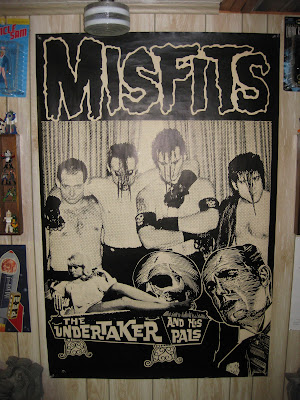 That thing has managed to survive at least five moves, maybe more.
3 – El Buque maldito
(Ship of Zombies or The Ghost Galleon or Horror of the Zombies or Blind Dead 3)
This is the third of four movies about undead Templars wreaking havoc on regular folks who are in the wrong place, but this one is by far the dumbest because the regular folks are swimsuit models. Amando de Ossorio directed each of the movies and while the first is actually quite good and the second and fourth are decent; this third entry is fucking goofy. It takes place aboard a decrepit old ship with a certain dark evil on board – horrifyingly loud lanterns! The sound effects in this thing are nothing short of astonishing. Every sway of a lantern, every creak of a step, is so loud as to completely ruing the atmosphere. And the bikini models are all so dumb as to seem incredibly realistic. Ossorio got all indignant when bootlegs and illicit international versions of his movies started getting released. Not because they were low quality or because he wasn’t seeing a dime from them; but because it pissed him off that people were calling his undead Templars zombies. He insisted they were more mummy-like and not mindless like your more standard walking corpses. Whatever, dude.

2 - Hellgate
Like most of what’s on this list I first saw this movie on one of those Blockbuster nights. The ones where you used to just go to Blockbuster and randomly pick the horror movie with the worst cover. Me and my roommates watched it and I ended up keeping it way past the due date so I could cut it together with They Live, Child’s Play, and some other movies and set the whole thing to every single Brak song on the Space Ghost: Musical Barbeque CD. Yes, seriously. The truly mind-boggling thing about Hellgate is not that it features Ron Pallilo (Welcome Back, Kotter’s Horschack) as its protagonist, but that it was released in 1990. I realize that’s over twenty years ago, but aside from Pallilo’s age you’d swear the thing was a product of the early eighties at the latest. You should go to Netflix and watch this immediately.