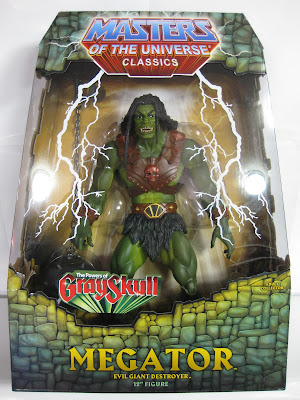 I’m not entirely sure who Megator is – other than being a giant – and I as usual skipped reading the bio on the box. I think he and Tytus might have come out in France or something?
Regardless of my familiarity with the character, I was still excited about the toy when I first saw it. Big, green giants are right up my alley. And I was doubly excited when I saw the alternate zombie head. It looked like something out of an EC comic and that is definitely my thing.
I will say, though, that it wasn’t fair to the big guy to come in the same month as Man-E-Faces. Compared to such a heavy-hitter Megator isn’t quite as exciting as if he had come in the same month as, say, Flutterby. 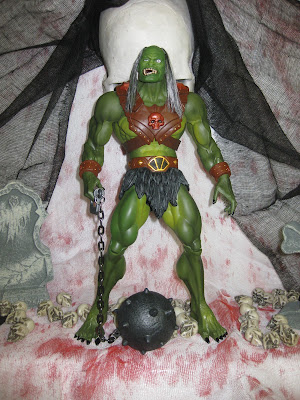 First Glance: This guy is huge. I still feel that the regular Masters figures are a shade too expensive, but all of the other items Matty offers seem like a bargain to me. Forty bucks for this guy, thirty for Battle Cat and Panthor and again a measly forty for the very first vehicle – the Wind Raider; which looks quite large and is coming in October. But anyway, Megator is big. 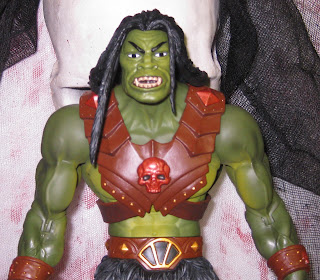 Sculpt: I’m sure there’s a technical term for the process used to make Megator, but I don’t know what it is. I don’t think he’s rotocast, but he is hollow and made of a softer, vinyl-like material. Like the old character models you used to be able to buy in comic shops. I was big into those for a while. I had a Wolverine and Judges Dredd and Anderson – maybe a couple others. There was a Pinhead I was dying to get, but it was pricey. The others are no longer with me due to an incident where my sister knocked over a bookcase and caused the rapid unintended descent of many collectible items.
Oh, yeah – Megator. He looks good. His articulation is fairly primitive, but at this size I’m not sure you could expect too much more. He has a ball-jointed neck that basically only swivels. His shoulders are sort-of ball-jointed, but mostly just swivel – there is a very slight side-to-side mobility. Megator’s elbows, hips and knees are all basic pivots and he has swivel wrists and waist. Overall it’s a pretty basic body that relies on a paint job and some accessories to make it work; which is just fine.
The standard head has sculpted hair and a very well done Angry Face that is chock full of character. This one looks very Dungeons and Dragons to me for some reason.
The wrists have cuffs with a nice amount of detail that cover the joints nicely. Megator’s furry underpants and belt look good and are soft enough that they don’t interfere with leg movement very much. The chest harness is a separate piece that I don’t believe is removable – I didn’t try very hard – and looks great. The skull and all of the detailing is very nice and accomplish the task of making the figure more unique than it would otherwise be.
The joints tight on mine and everything lines up nicely. No warping or mashed parts. 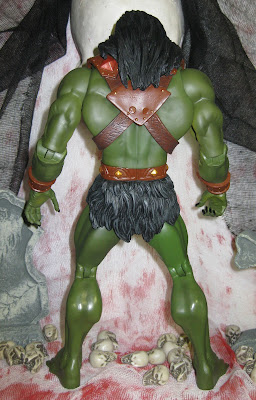 Design: Megator’s skin is a nasty green highlighted and shaded in a way that also help him to stand out. The heads – though simple - both sport nice paint jobs.
Megator’s clothing, such as it is, is all detailed nicely to look worn and realistic. The harness and wrist cuffs are very nice and class the figure up considerably. 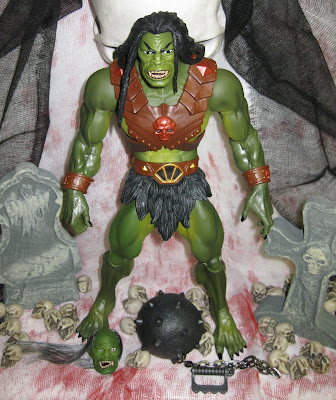 Accessories: Megator comes packed with a gigantic ball and chain and an extra “zombie” head.
The ball and chain is massive and looks like it would pretty much turn any Master it made contact with into pudding. The grip and ball are a solid, firm plastic and the chain is metal. It’s a nice, well-made weapon that serves the figure well. 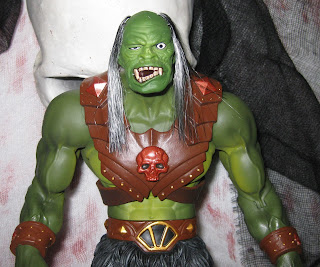 The extra head is my favorite. The face is great and just looks like a scary old comic book creature. The hair is rooted and pretty much sucks where it meets with the head, but as far as hanging down and looking creepy it’s pretty good. I would just prefer if it didn’t look like Ron Killings’ weave. 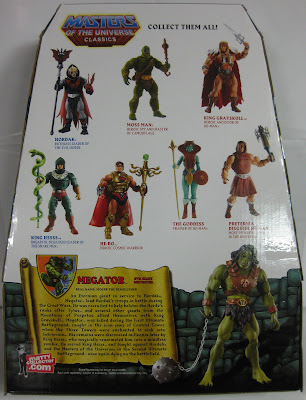 Packaging: Big-ass window box. With a bio on the back. Megator’s actual name is much cooler than “Megator” - Moleb the Demolisher. Fucking rad. 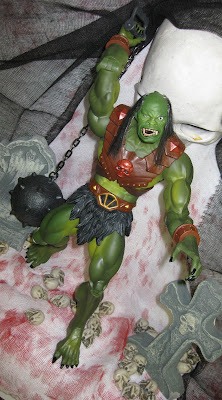 Overall: I’m going to see if Mrs. Troublemaker has any Barbie combs to brush out Megator’s zombie head hair. Maybe if it isn’t clumped so badly it’ll look better. Other than that, this is a great figure. I highly recommend it.
5 out of 5
Something occurred to me while I was writing this review. The Marvel Universe Galactus figure that is currently languishing in every Toys R Us in the land is sixteen inches tall, made of (what appears to be) high quality plastic, has sounds and lights and is $54.99. So now Megator seems like maybe not as good a deal. But when compared to the other Masters Megator is still a steal and a great toy either way. You should have one.
He’s long gone from Matty, but you can still pick the big, green guy up from BigBad, along with his nemesis Tytus; who is on sale right now along with a ton of other MOTUC stuff. I think these prices go a long way toward explaining the lower number of subscriptions and the resultant reduction in production numbers for 2012’s subscription.
31 Days of Halloween vs. 31 Days of Halloween!
Halloween score – 5
Quality score – 1 (but only because there's some Paranormal Witness thrown in there and that might be not stupid)
Halloween score – 4
Quality score – I'll be generous and guess a 3
Halloween score – 0
Quality score - 0
Halloween score – 3
Quality score - 3
Until next time, stay creepy
-Phantom
Posted by Phantom Troublemaker at 11:00:00 AM