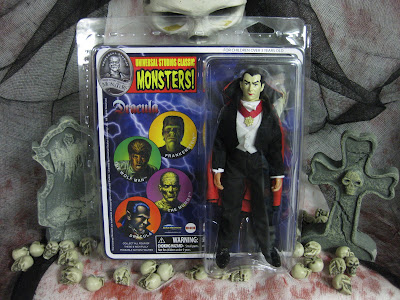 So here’s the third of the currently available Universal Monsters from this line.
Dracula as a character is not my favorite. As a matter of fact, he comes in a solid fourth when compared against the other three characters in the Retro Cloth line. Further down when you add in other Universal Monsters. Now, if we’re talking about Hammer Dracula that’s a whole different story. That guy is a bad motherfucker.
This guy also had another strike against him given the fact that I’ve got the Flatt World Dracula (to be reviewed later). That thing is so outstanding that even with the huge price difference poor ol’ Retro Drac just isn’t that appealing. But is he a quality toy objectively? Let’s see… 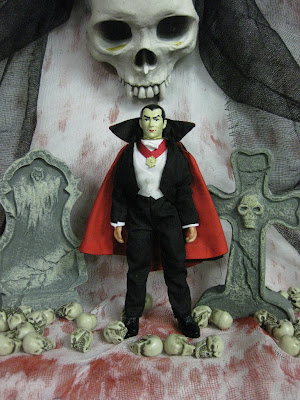 First Glance: I’m not crazy about the head, but it doesn’t look as bad as some of the pre-production pictures I saw. It certainly looks better than all the non-Lugosi likeness Draculas that have come out over the years. I’m not sure if this one is licensed or not. 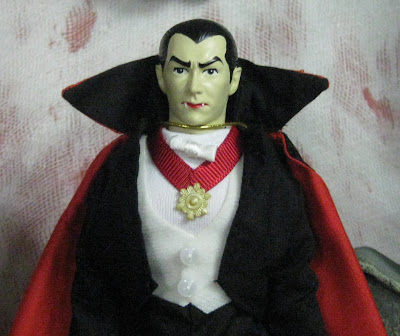 Sculpt: Underneath his clothes Dracula is just like all the other Retro Cloth figures. Good but odd articulation. I do respect the tribute to Mego, but I still think swivels at the biceps or under the shoulders would have been nice. Other than that, all of the joints are tight and provide enough support to keep the figure standing well.
The head sculpt is great if this is a generic Universal Dracula and not-so-great if this is supposed to be Bela Lugosi. It doesn’t look bad by any means. It’s clearly Dracula of one kind or another even without the fancy duds and that’s what really matters. A kid (which would have been the target audience for this guy back in the day) would love it. 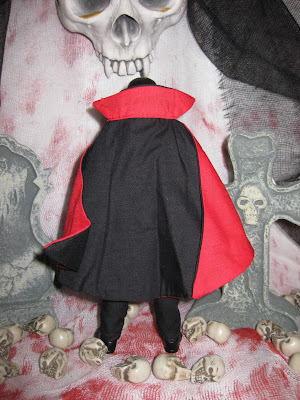 Design: The paint job on Dracula’s head is great. The colors are fantastic and there’s not a speck out of place. The eyes look straight ahead and the guy is properly ghoulish.
The Prince of Darkness’ threads are, for the most part, very fancy. His cape has a nice red lining that is stitched in very well. I'm not crazy about the little gold thread securing the cape to the figure, but it is practical and old-school. The coat has tails (I feel that Dracula and the Joker should both always have tails on their coats) and is cut nicely. They didn’t go all out and give his pants that tuxedo trim, but I can deal with that. Especially with his fancy little vest and medallion. What I don’t like is the texture of his shirt. It feels almost kind of fuzzy, like a twenty-year-old wife beater. He also has little socks, which I think is just adorable.
But now let’s talk about where this Dracula shits the bed.
I absolutely hate that he has normal Caucasian-hued hands and arms. Totally lame. Frankenstein’s Monster and Wolf Man both have parts molded in plastic colored to match their other exposed parts. I cannot for the life of me understand why a guy who is probably widely considered to be the greatest screen monster of all time would get the shaft. It looks terrible and seriously ruins the figure for me. The toy itself is still a novel curiosity that I’ll leave on the shelf and find interesting, but while the other Retro Cloth Monsters felt like a respectful upgrade from the Megos, this one feels like a backslide.
I do like that the cape’s seam is thick enough that you can have the figure hold it in a close approximation of the old Dracula peek-a-boo pose.
Accessories: None. I fell like maybe if he had come with a crazy-looking bat on a string it might – might – have made up for his awful pink hands. Packaging: These Universal Monsters come in the same packaging as the Star Trek Retro Cloth figures (. It’s a perforated plastic shell over a cardboard backer. You have to cut the edges of the shell to get the figure open, but the shell is resealable. I would like it more if there were stickers or something holding the shell together and it did not require cutting. Once you cut the edges it leaves them sharp and they will cut you rather easily. I admire the intention with this method, but the execution leaves something to be desired. 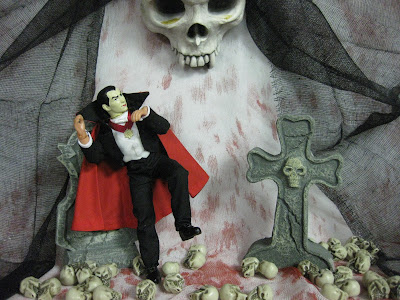 Overall: Dammit. I so wanted this to be a perfect series of toys. Do you know how rare it is that every figure in a collection is a home run? Granted, if the line keeps going there is a much greater possibility for disappointment (especially if they do the Gill-Man), but four perfect figures would have been nice. And they blew it only three in.
3 out of 5 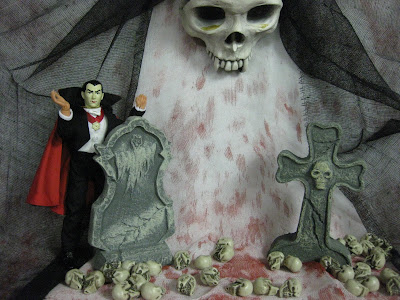 It might not be fair to knock off two whole points for just the hands and arms, but that shirt kind of bothers me too. And if I’m penalizing already I might as well go all out. I won’t say you should skip this figure, just be ready to hate it a little bit while you’re enjoying it. 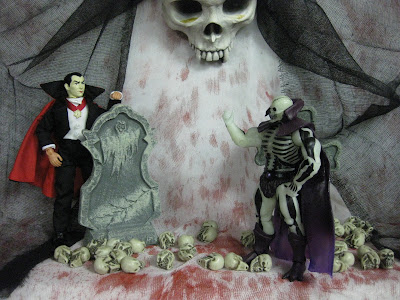 Scareglow – “Okay, Vlad. I waited to come to you because honestly I’m a little in awe of you. You make me a little nervous. I mean, you’re a bona-fide legend, man.”
Dracula – “You came to me last because I’m the only one that can talk, you ass.”
Scareglow – “Okay, well… that too. But the Monster and Mr. Talbot are already in and Imhotep is a pushover and it’s going to be totally awesome and we have to have one more to pull this off! And you’re so cool and the only…” 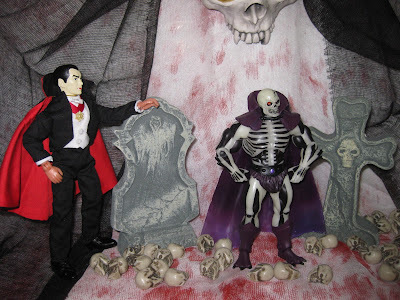 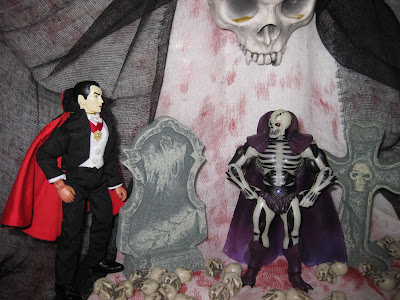 Scareglow – “What?”
Dracula – “She’s with that blue guy with the stupid skull head. No offense. But I can’t compete with that guy. He’s fucking huge.” 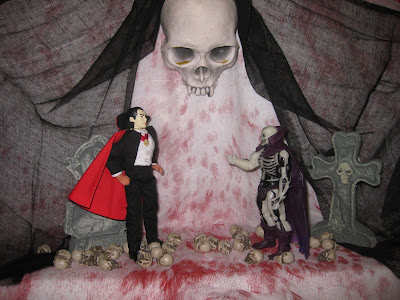 Scareglow – “Uh, don’t you have, like, hypno-seductive super powers?”
Dracula – “Yeah, but in all honesty those are kind of rapey and I’m trying to get away from that image. It’s the new millennium, man.”
Feminist Batgirl – “Good for you! Sort of…”
Dracula – “So anyway, that’s the deal.”
Scareglow – “Consider it done!” 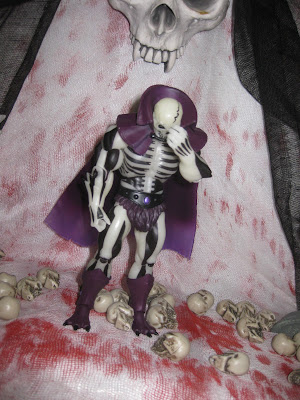