Note: I am going to do my best to not mention a certain other Halloween attraction in this review. I believe each event should be judged on its own merits and not compared to anything else.
Also, I am prepared to accept that any gripes I have may be the result of us being there on a Thursday night when business is not at its peak. I don’t feel like that’s any excuse when you’re charging the same to regular patrons Thursday night as you are any other night, but I am willing to believe that’s the reason behind certain things.
Evil showed up during the PCW main event, so there were five of us going to the Chambers of Horror afterwards. I had an absolutely ripping drunk on to the point where I tried to get shot outside: 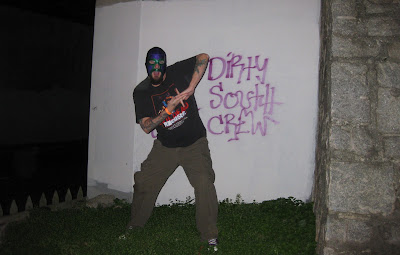 Yeah. Good idea.
There wasn’t much to take pictures of around the Chambers of Horror and the employees were perhaps a bit more protective of things than they really needed to be. I understand wanting to get into the spirit of the attraction, but I only need to be told not to take photographs so many times.
As we approached the ticket booth the first thing I noticed was the large “No Refunds” sign. It’s an important sign, because it is the sole reason I ended up actually experiencing the Chambers of Horror. We bought our tickets and I feel it important to note here that we got a discount since we had just attended the PCW show. Normally admission is $17, but we got $5 off. Not too shabby considering PCW is free.
Evil went and bought a Newcastle and Hoffman got some other kind of beverage – there is a bar in front of the Chambers, but the selection is limited. Angry Matt is also Sober Matt and Rescue John had already enjoyed his requisite shot of tequila for the night, so they abstained. I just didn’t feel like walking the massive, 20-foot distance to the bar.
There are three different lines to get into the Chambers. First you are in a queue very similar to what you might find at a theme park or Dragon*Con registration. Then you move up to a series of bike rails that divide you into groups. Lastly you end up just mobbed in front of the entrance, where you watch a video featuring not-Monica Kaufman and her camera man investigating what is basically the place from Eli Roth’s Hostel movies, but in Atlanta. This was a neat little bit, but it would have been a billion times better if they had had a Japanese guy that looked like Takashi Miike walk by at some point.
Oh, the reason that “No Refunds” sign played such an important role is that once we got past the first queue a guy told me I couldn’t wear my mask in. So if any of you were wondering how much it would cost to get me to take my mask off in public, there’s your answer: $12. I’m a cheap bastard.
Also, you have to finish your beverages before the final waiting area, so Evil and I took turns chugging his Newcastle. This was a terrible, terrible mistake on my part. I have a bad history with Newcastle (specifically Newcastle at the Masquerade) that I did not remember until the next day. But mixing that eight or so ounces of Newcastle with the twelve or so Miller Lites that I had already enjoyed in the evening led to one sick fucking Troublemaker the next morning. Worst. Vomiting. Ever. And I kept passing out when I got home, which is why my Friday article didn’t go up until, like eight o’clock at night. 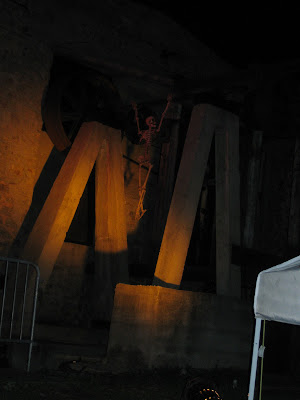