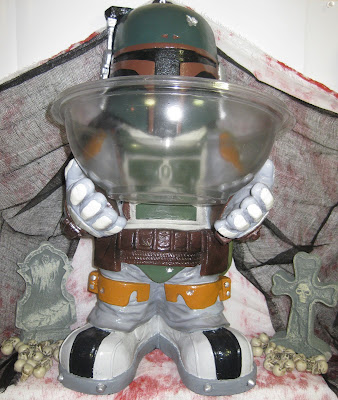 This thing isn’t creepy or spooky at all. But it is a Halloween item, so it gets a review here.
I don’t actually remember when it was offered through Previews and I really don’t remember ordering it, but since it’s Boba Fett I feel reasonably certain that I did. I do remember seeing the item listed and it turned out a bit different from what I was expecting. Not necessarily in a bad way, just different.
The Bobs Fett Candy Server is by far one of the stupidest and most useless things I have ever purchased. This is not the fault of the manufacturers or the item itself. It’s just that we don’t eat candy regularly enough to require a separate storage unit, we don’t get trick-or-treaters because there are no kids in our neighborhood, and even if we did there’s no way I would just leave this thing outside.

But – it is Boba Fett so I had to have it. There is no limit on the number of stupid things I will buy just because they have that Mandalorian’s likeness attached somehow. I’ve got Boba Fett drinking glasses, mugs, headphones, matchbox cars, statues, jackets, keychains, Christmas ornaments, underpants, toothpicks, soap dispensers, blankets, gardening trowels and waterproof dog slippers.
It’s ridiculous.
Granted, not as ridiculous as my Boba Fett/Phantom Troublemaker mash-up costume:
But still really silly.
So there was no question I was going to own this thing at some point. Was it worth it? 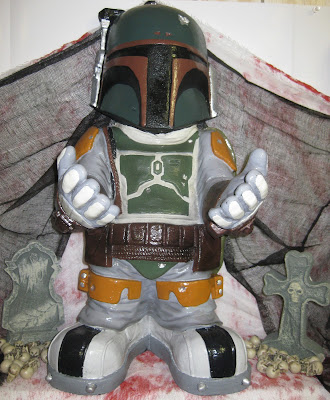 First Glance: It took more than a glance for this, but I was shocked at how light the box was when I picked it up at the comic shop. Once I opened it I found out why – the bowl was extremely thin, cheap plastic and the figure itself was not the full statue I thought it was going to be. But it still looks good. 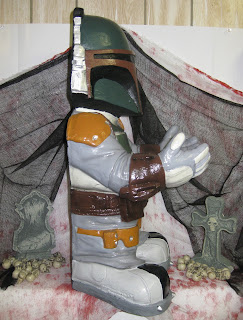 Sculpt: The front portion of the statue looks great. It’s a perfect caricature of Fett, right down to the spikes on his shoes and the patterns on his gloves. I’m really impressed that the sculptor(s) nailed everything so well. His armor is all accurate, as well as the Wookie scalps, cape, helmet (with dent), and gauntlets. He does have a bumpy texture all over, but that is a common occurrence with these sort of indoor/outdoor items. It’s barely noticeable when you’re taking in the piece as a whole. Every bit of this is done by people who know the character and had good references to work from. 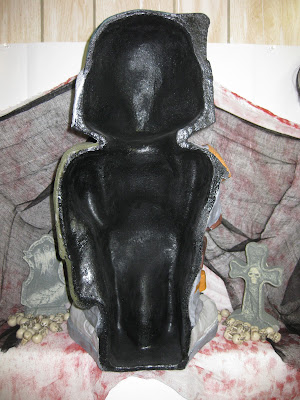 The back, though, is simply a hollowed out shell. The sculpting stops at the halfway point and becomes a concave backing. Which is actually just fine. I’m not sure what retail is on this thing since I got a pretty fair discount, but I can guarantee it would have been at least half again as much if not for that hollowed-out back. And nobody should care about that. This little guy is meant to be backed up against a wall serving candy. You really shouldn’t ever really see his back. So in the interest of making him more affordable, they left it off. I am totally down with that because I wouldn’t have paid much more than I did for this thing. 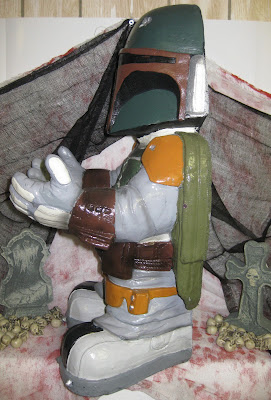 Design: This little Fett’s paint looks very good. It would have been easy to just use four colors and call it a day, but the designers really nailed all the key details. Even the color difference between his vest and jumpsuit is noticeable and I’ve got several items that overlook that. Same with the gloves. Many licensed products don’t pick up the detailing there.
When I first pulled this thing out of the box it had kind of a sticky feel to it. Like the paint wasn’t dry yet. It doesn’t have that any more. Don’t know why. Maybe the dogs licked it off.
Accessories: I’m going to call the bowl an accessory. The bowl is a piece of crap and the only source of complaint I have about the whole item. You couldn’t buy a bowl this crappy at the place down the street that sells statues of skulls with daggers in them from the same shelf as off-brand steel wool and has a 4’x4’ bin full of tan granny panties greeting you as soon as you walk in. Their buyers would look at it and go, “No way are we going to carry something that flimsy. We have standards, you know.” Also of note is the fact that the sticker on the bottom of the bowl says "Freddy Candy Holder". 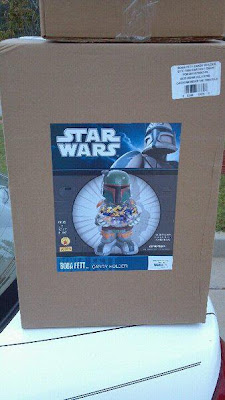 Packaging: Not worth mentioning. It’s a cardboard box with a picture of the item on the front. Basically a shipping box, which is fine because who cares?
Overall: This is a fun little item if you can get it for thrity bucks or less. It’s a must for Fett collectors because of its uniqueness, but might appeal to broader Star Wars collectors as well. There’s also a Darth Vader version. Lil’ Troublemaker wants that one, but good lord do we not need two of these things.
4 out of 5
Yeah, the bowl is crap, but whatever. The rest of it is really neat and it’s not like you’re going to be serving caviar out of this thing. 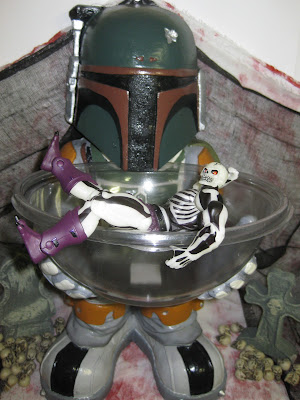 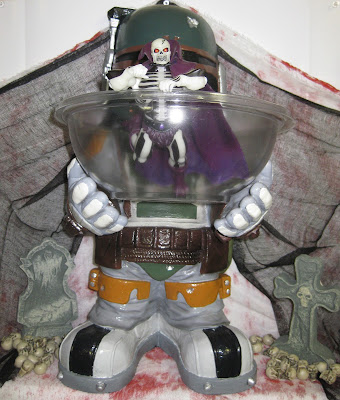 Scareglow: “No! I’m sexy! Ladies are totally going to get this tattooed on them! Me and Fett!”” 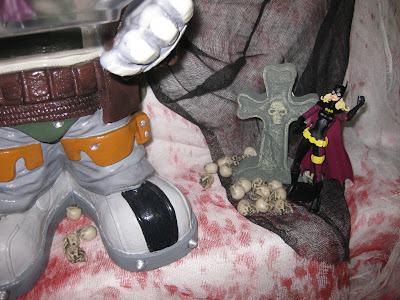 Feminist Batgirl: “Right! This is exactly the sort of thing we need more of – blowing up the old gender paradigms. You’re a sexy skeleton in furry underpants. It’s a statement against the misogynist establishment pigs!” 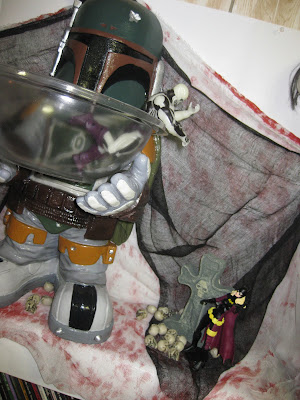 Scareglow: “That’s right, sweetheart. And you should take off that tight leather suit and bring your sweet ass up here into my hot love soup.”
Feminist Batgirl: “WHAT!?!”
Me: “I am so out of here.”
31 Days of Halloween vs. 31 Days of Halloween!
11:00 AM – 7:00 PM – Stephen King’s The Stand – The book is my favorite of King’s works besides the Dark Tower series. This adaptation by Mick Garris doesn’t suck as much as the adaptation of It, but it sure isn’t good. Bad casting, pacing and more than a touch of bad acting add up to a mini-series with a few good moments but nothing great to offer.
Halloween score – 3
Quality score – 2
7:30 PM – 1:30 AM – Saw II, III, IV – They just showed these last Sunday. Seriously, guys – there are so many other movies you could be playing.
Halloween score – 3
Quality score – 3-ish
1:30 AM – 3:30 AM – Phantom Racer – A SyFy Original that I cannot find anything out about. Obviously the title makes me curious.
Halloween score – 4?
Quality score – 3?
3:30 AM – 4:30 AM – Scariest Places on Earth – Good show. Watch it.
Halloween score – 4
Quality score – 3
4:30 AM – 5:00 AM – Scare Tactics
Halloween score – 4
Quality score – 1
5:00 AM – 8:00 AM – Paid Programming
Halloween score – 0
Quality score – 0
8:00 AM – 11:00 AM – Fact or Faked: Paranormal Files – Okay, I’ve been waiting for this one. I love this show even though it is hosted by a bunch of insufferable hipster science nerds who couldn’t act their way out of a paper bag. They investigate various strange phenomena around the world and try to recreate the reported occurrences. They’re fairly skeptical and earnest in their endeavors and are never too eager to believe something is a ghost or chupacabras or alien or whatever. As a matter of fact, they often come to the conclusion that the incident was faked or just a result of conditions that they cannot duplicate. The show isn’t necessarily spooky, but there was some footage on one episode that made my butthole pucker. It features footage of some kind of walking thing and it creeps me the fuck out. I don’t think they’re showing that one during the marathon, though.
Halloween score – 3
Quality score – 4
Until next time, stay creepy
-Phantom
Posted by Phantom Troublemaker at 11:00:00 AM