Toy Review – Masters of the Universe Classics: Leech By Mattel 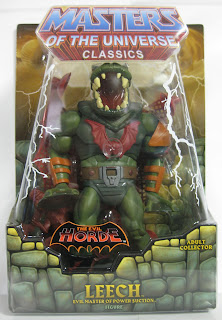 I think I did myself a big favor by spending the last 87 weeks talking about Dragon*Con. I’ve spent so much time doing narrative that I’m ready to jump back into some toy reviews, which, quite frankly I was a little burned out on.
So it’s toy time again and what better way to get back into things than by reviewing the Masters of the Universe Classics figure that I’ve been more excited about than any other?
Leech was always my favorite of the original Masters toys. I didn’t have a lot, but Hordak’s power-sucking minion was in my collection. Even a as kid I was not a big fan of action features; as they almost always resulted in figures that were less poseable or aesthetically pleasing and didn’t work properly half the time anyway. But Leech managed to incorporate two functional action features and still looked great. The big, green guy had suction cup hands that worked fairly well. He also had a suction cup mouth that worked extremely well thanks to a pump built into the figure which also allowed Leech to squirt water out of his mouth.

This new Leech was announced back at Toy Fair in February and I thought the wait might kill me. Okay, not really; but I was definitely excited about this guy. Even before I was collecting MOTUC full-time I knew whenever Leech got the update I’d be buying him.
For the first time in a while my monthly Masters figures shipped like they used to. They went out the day before the sale and arrived six days later. Very satisfying. I doubt I’ll have the same luck with the Wind Raider next month, if I can even get one. I still don’t know if the sale is going to be on the 14th or the 17th. If it’s on the 14th I am boned because I have to be at work. 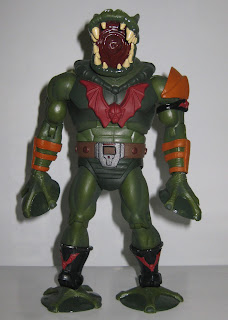 First Glance: Leech is nice and thick – another of those figures that fills up the packaging. He doesn’t appear to be 100% new tooling, but there are a lot of fresh parts. 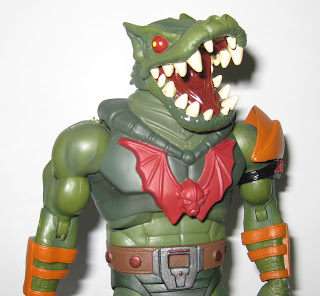 Sculpt: Leech has all of the standard MOTUC articulation – ball joint head, shoulders, hips; swivel biceps, waist, upper thigh and calf; pivot elbows, knees, abdomen; rocker ankles. What made me extra happy was Leech’s wrist articulation – his wrists swivel and pivot.
Leech has a new head, forearms, hands, feet, crotch, lower abdomen and upper abdomen. The head looks amazing. The interpretation of the classic head is just great. Mattel has repeatedly stated that there will be no action features in the Classics line, but I’d rather have this head than a suction cup anyway. Leech looks positively vicious in a way the original figure only implied. The eyes are bestial and mean, the teeth look absolutely brutal and there’s even a little hole at the back of that maw reminiscent of the air/water vent in the old figure.
The abdomen looks great. The back has the large armor plates that I liked so much back in the day and the whole thing is nice and thick. It’s funny how something as simple as a larger torso can make the whole figure seem so much different from everything else in the line. Leech has a nice, wide belt that breaks up his midsection nicely. He also sports the same style of soft plastic “underpants” that the non-furry underwear figures use. It looks good and only interferes with movement if you are trying to move the legs further back than most humanoid anatomy would allow anyway.
Leech’s hands and feet look great and the joints are nice and tight. My only complaint here is that I think the hands should have been sculpted with smooth pads so the figure could “hold” the included net. The texture on the palms looks very nice, but prevents the cups on the net from attaching. This means the figure can’t really interact with the coolest accessory very much.
Leech also has a new Evil Horde armband. It has his shoulder armor attached and just doesn’t quite work right. The armor doesn’t sit like it is supposed to – it kind of sticks up in the air. It doesn’t look terrible, but it isn’t quite right, either. 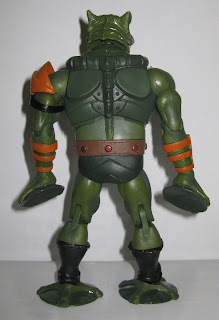 Design: Leech’s primary color is a nice, swampy green with lots of nicely painted highlights. His chestplate is a darker green with the Horde crest nicely done on the front.
The paint on his head looks great. The eyes are a vicious yellow and red – tightly done – and the teeth aren’t quite white. This is a nice touch and a deviation from the original.
The orange on the bracers looks good an clean and the lower legs – shared with the other Horde members – have nice, tight detailing. 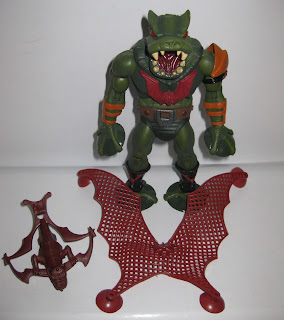 Accessories: Leech comes packed with a Horde crossbow and a net.
The crossbow is your standard-issue Horde weapon. I like that everybody in Hordak’s army has a common weapon. This one fits well on either of Leech’s arms and the plastic seems sturdy enough that you’re not going to damage the attaching tabs with repeated removal.
The net is just completely insane and one of my favorite MOTUC accessories so far. This surprised me, because my first thought when I saw it back in February was that it was stupid. Admittedly, part of my disdain was that Matty was trying to pass the net off as a replacement for Leech’s suction cup hands/head. C’mon now, Matty. Don’t undermine an item’s quality by trying to pass it off as something it clearly isn’t. Anyway, the net is awesome. It is shaped like the Horde crest and has suction cups at four different points. For some crazy reason it has a little Hordak head right in the middle: 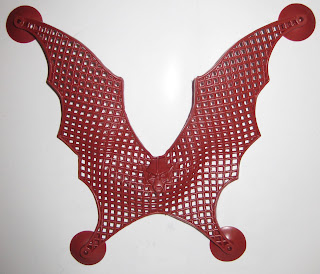 I love that little Hordak head. 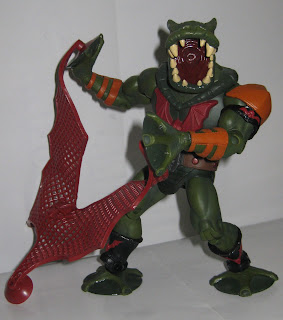 The suction cups work really well and will stick to pretty much any smooth surface, even the paper I use as my photography backdrop. The only problem with the net is that Leech can’t really do anything with it. It doesn’t store anywhere and he can’t hold it, so you have to either kind of hang it on his arm or lay it on the ground near him. 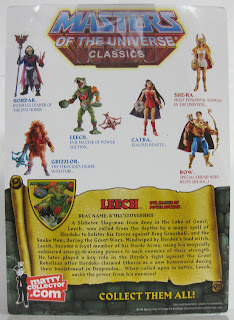 Packaging: The standard Masters of the Universe Classics packaging. It looks nice and makes the figures look even bigger than they are. You also get a bio on the back that is sort of a composite of each character’s history. 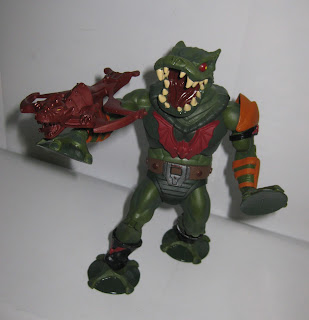 Overall: Aside from the questionable shoulder armor and the texture on the hands this figure is everything I could have wanted. He looks great on the shelf and as much as I loved the features on the original I’d rather have the posability of this new version. He’s still scary and doesn’t just stand there like a lump.
4 out of 5
Leech took a couple of days to sell out on Mattycollector.com, yet another sign of how messed up the numbers for 2011 must be.
If you want a Leech – and you should – you can get one from BigBad or of course eBay.
Until next time, stay creepy
-Phantom
Posted by Phantom Troublemaker at 11:00:00 AM