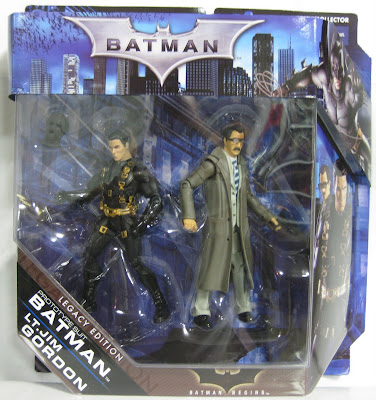 I find it extremely weird that Batman Legacy encompasses Movie Masters and DCUC-style figures. Not to mention the Arkham City figures.
I was excited by the Mr. Freeze figure from the first series of single-carded figures but ultimately disappointed. As far as the subject of today’s review goes, I was absolutely thrilled to be getting a figure of Gary Oldman as Gordon but significantly less thrilled that he was packed in with a figure that has been clearanced for as little as $2.99.
But as happens so many times, I was willing to pay a premium for a figure I deemed a must-have. Everybody put up preorders for this one, but I did draw the line at paying the online mark-up plus shipping. I felt pretty sure that at least these first releases under the new Batman Legacy moniker would be fairly easy to find at retail and I was right. I found the whole first series of figures as well as the two two-packs at Target the other day and picked up this one. 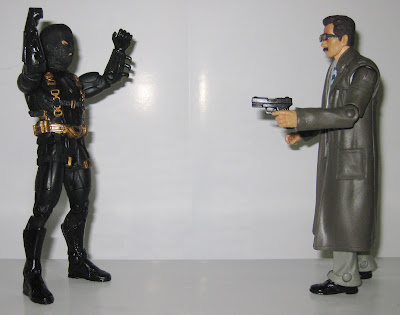 First Glance: I don’t care for Gordon’s glasses right of the bat. The Prototype suit actually looks a little cooler than I thought it would. I’ve never taken the time to look at it before because I wasn’t interested in the single-carded version, but he’s actually pretty neat. 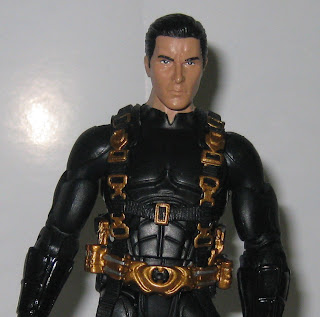 Sculpt: Yeah, this Bruce Wayne is pretty cool. The head sculpt is a dead-on likeness of Christian Bale. The body has ball joints or analogs for the head, shoulders and hips; swivel biceps, thighs, waist and wrists and pivoting elbows, knees and ankles. The articulation isn’t perfect, but I appreciate the emphasis on aesthetics for these more realistic figures. 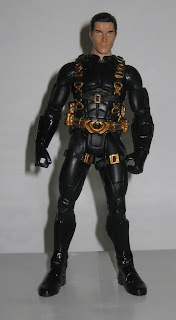 While this suit doesn’t feature as much detail as either of the finished batsuits, it does have a fair amount going on. There are still all kinds of notches and grooves on the gauntlets, boots and chest piece. I mean, just look at the treads on those boots!: 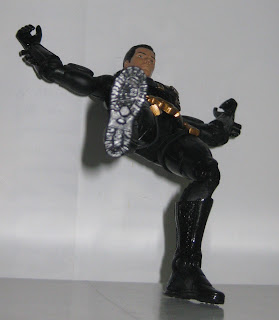 The webbing harness is the coolest part. It’s made of a soft rubber and looks good while not interfering with the figure’s mobility. 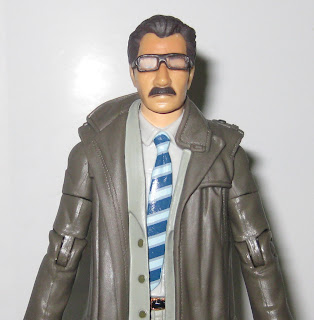 At first glance Gordon looks very good, but the glasses are weird. The lenses aren’t transparent enough and mine are sitting too high on the figure’s face. They’re glued on at the temples and it looks like mine weren’t quite attached at the proper angle. As a result my Gordon kind of looks like he’s in the process of falling or something. The face under those glasses looks very good, though. The rest of the figure surprised me by being a new sculpt. I kind of thought Mattel would just use the Question body and coat and maybe use shorter thighs to make the figure smaller. I was wrong. 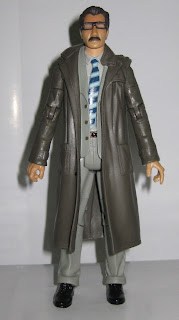 Gordon sports a smaller body and a shorter coat and fits right in with the rest of the Movie Masters. The coat looks very good – wrinkled and worn. The suit underneath doesn’t draw much attention, but looks solid. Gordon has as much articulation as you’d need out of this character, but they may as well have left the ankle joints off. The pegs on the outside look weird and the feet barely move anyway. 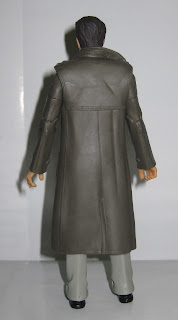 Design: Gordon has a great paint job. The hair and face look good and his mustache paint doesn’t bleed onto the face. His coat and suit look weathered and real. 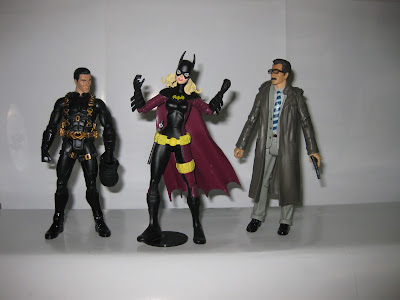 Batgirl – “Huh. I see that they put a big, baggy coat on Gary Oldman’s figure. No revealing spandex. No exploitative latex covering his sweet ass.”
Me – “Uh – that’s what he looked like in the movie.”
Batgirl – “Oh, and I suppose a police officer couldn’t wear a tight-fitting unitard?”
Me - “Not really, no.” 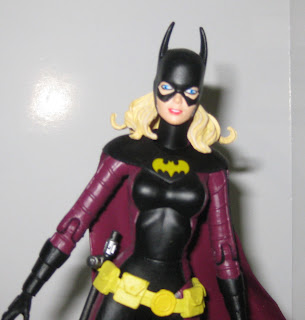 Batgirl – “Because maybe I’d like to see the tuckus on a hottie like Gary Oldman. Maybe Jim Gordon is a sex object to people who weren’t blessed with a penis like all the pig decision makers in Hollywood.”
Me – “This would be really a icky conversation if you were a different Batgirl.” 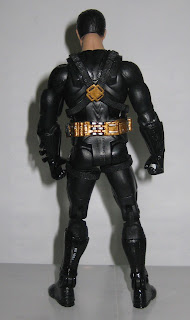 Pre-Batman is very nice as well. The head looks good and is clean. The body has several different glosses of black to make things stand out. The harness is neat and has those brass buckles that really stand out and look good. 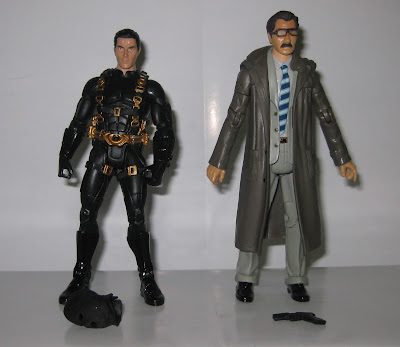 Accessories: Bats comes with a ski mask and Gordon has an automatic pistol. The ski mask is a very soft rubber and fits over Master Wayne’s noggin with little difficulty. It’s black.
Gordon’s gun is made of a slightly less soft rubber, but it does look good. The sculpt is great and there are a couple of painted details that make it more than just a piece of black plastic. Gordon, however, can barely be convinced to hold it. It just sort of lays gingerly in his left hand and he can’t hold it in his right at all (I can’t recall if Gordon [or Oldman, for that matter] is a southpaw so I don’t know how accurate that is. (I do know that the actual Oldman can hold guns quite well, though). 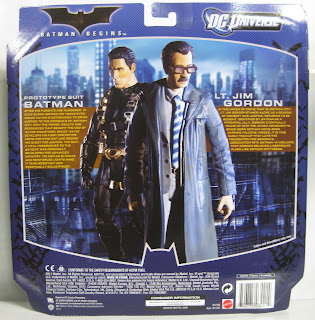 Packaging: It’s funny that the single-carded Young Justice figures are in larger packages than these two-packs. This one is still fairly hefty, though. Mattel isn’t making any friends in the tree-hugging communities. Or communes, as the case may be. 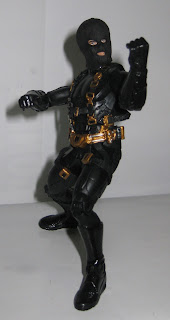 Overall: Gordon’s glasses aside, I’m happier with this set than I thought I’d be. Pre-Batman ended up being a good addition and Gordon was a must anyway. His glasses aren’t as bad as I made them out to be, I think the fact that I wear glasses makes me more sensitive to them. If mine were that murky and sitting on top of my eyebrows I’d have a real problem.
4 out of 5
It’s a good set. Too pricey in my opinion, but if you’re collecting the Movie Masters you should definitely pick it up.
Until next time, stay creepy
-Phantom
Posted by Phantom Troublemaker at 11:00:00 AM