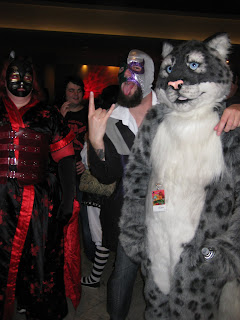 This one's going to be short.
After wrestling we ran into Bumblebee: 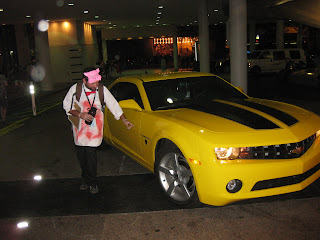 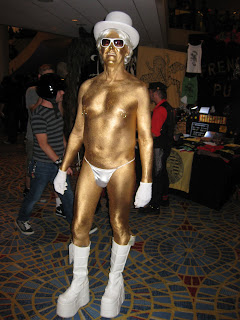 Yeah, I know that was a tenuous link at best. What are you gonna do?
There was also this couple – I presume they were a couple because I can’t imagine putting on Mortal Kombat costumes and not fucking afterwards – dressed as Reptile and Sonia Blade. They were totally awesome because whenever people wanted a picture they would adopt a combat pose from the game like this: 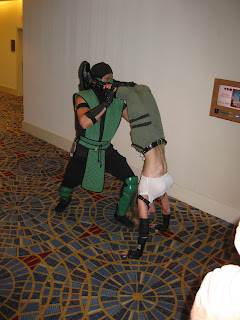 It was pretty unbelievable. They even did it during the parade, so be sure and come back tomorrow for that picture.
I don’t remember why, but we went back to Evil’s room. I think so he could puke. Lady Evil pointed out that’s what happens when he dips. I always forget he does that. I don’t even know how you’d pick up such a habit. Maybe from camp or something.
Anyway, Evil’s regurgitation may not have been our goal, but it certainly did end up as part of the proceedings. But only after this happened: 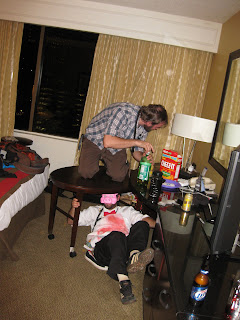 Once everybody was all neat and pretty again we headed for our typical destination – the Marriot’s Atrium level. The primo spot for gawking during the wonderful weekend that is Dragon*Con. 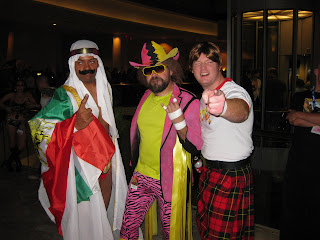 There were a lot of Macho Mans running around. There were also a fairly upsetting number of Nazi chicks. 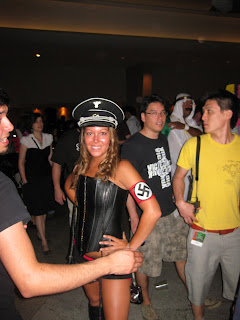 I thought maybe that would be kind of okay but not really if they were supposed to be Sherri Moon Zombie from Werewolf Women of the SS, but somebody told me they were Jesse James’ girlfriend. I don’t know why they laughed when I pointed out they didn’t look anything like Sandra Bullock after being punched in the face. 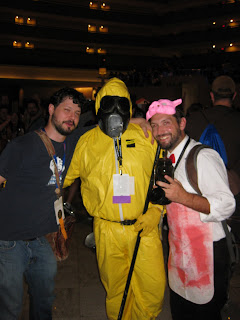 Another costume that we saw plenty of was the Sci-Fi Janitors of Dragon*Con TV fame. This was particularly awesome because the Janitors are the creation of a close, personal acquaintance of mine, Mr. Beau Brown. He’s really more a friend of Mrs. Troublemaker’s, but we ended up hanging out quite a bit over the weekend and he’s a lovely fellow well worthy of your puppet-oriented adoration. I’ll be writing about his outstanding Late Night Puppet Slam as part of this series. Look for it after the post about Sunday. Anyway, it was very cool to see that somebody I know was quite literally living a dream in front of us. People were walking around dressed as characters he created! That’s got to be surreal and awesome. 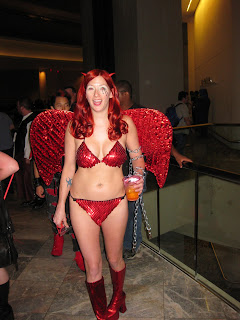 Evil didn’t find a specific game to play Friday night but did enjoy running around as Professor Pyg. We all got plenty drunk and checked out a ton of good costumes. I ended up buying beer from the side bars like I always do, but I metered it so I never ran out but also was sober enough to get up for the parade Saturday morning; which I’ll be posting about tomorrow. 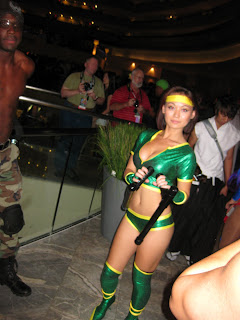 This post was kind of short and lame. Sorry about that, but I really want DCW and the parade to be their won posts and not a whole lot happened between the two except for drinking. Come on back tomorrow for more pictures of the 2011 Dragon*Con parade than you’ll ever want to see!
Until next time, stay creepy
-Phantom
Posted by Phantom Troublemaker at 11:00:00 AM

Email ThisBlogThis!Share to TwitterShare to FacebookShare to Pinterest
Labels: conventions, costumes, dragon*con, life the universe and everything