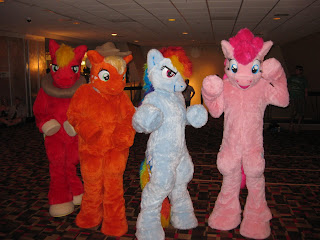 Day 1
Despite the hassle of the previous day, I woke up on Friday morning with a song in my heart (“Abigail” by King Diamond) and a smile on my face. After packing whatever last minute items were needed I loaded up the Phantomobile, hugged the family and made my way down to the magical land of Nerdia. Or Nerdvana. Or Nerdi Gras. Or El Nerderino, if you’re not into the whole brevity thing.
I always stop on the way down to pick up beer and one of those classy Styrofoam coolers that people use to store live fish that they have removed from rivers and lakes. I’m classy that way. Hey, I know exactly how hung over I’m going to be on checkout day. I sure as shit don’t want to be lugging a real cooler out to the car. I can just leave the Styrofoam number there.

Now, I don’t think of myself as a huge drinker. Last year I went down with a case of 24 Miller Lites and polished that off easily. I thought that if I got one of those plus a 12-pack I’d be on good shape for this year. I also picked up some snack items so I wouldn’t have to rely on the offerings of the Peachtree Center food court for sustenance this time.
My plan was to park in my normal spot – cheaper than the $20 a day the hotel was charging its guests – and head straight for Sylvester McCoy’s first panel of the weekend. I’d check in after that if I had time or maybe attend the Horror Icons or Supernatural panel.
The fact that the 7th Doctor was at Dragon*Con this year made it kind of the best thing ever. I’ve dreamed of meeting one of the Doctors – any one – since I was a little kid. McCoy is my second favorite Doctor next to the inimitable Tom Baker, and believe me when I say that’s no slight against the man. Aside from Mr. Baker I can’t really think of anybody who would be a bigger thrill for me to meet. I always had my list of The Big Three – Mike Patton, Bruce Campbell and Kevin Nash (all of whom I’ve met and were amazingly nice people) – but none of the Doctors were included simply for the fact that I never thought I’d meet one.
So hitting McCoy’s panel on the first day was a must, even though he had one scheduled for each day of the Con. I know how I am about panels on Saturday and Sunday (I’m tired/hung over) or God forbid Monday (get me the fuck home), so I knew I had better make it to the one on Friday just to be sure. And shockingly, I did. 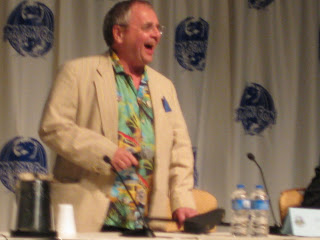 The panel was outstanding. McCoy seemed thrilled to be there and is an entertainer the likes of which you don’t often see. This panel was not specifically about Doctor Who, but about Sylvester McCoy’s life and career in general. I had no idea about what he had done other than portray a Time Lord, so it was fascinating to hear about his life before that.
It turns out he started in theater as part of a traveling group called (something). He played drunks and fools to great comedic effect and eventually became known as “Sylvest McCoy The Human Bomb” (only later extended to “Sylvester”) – essentially doing Steve-O’s act as an intermission for the troupe. They would bring the audience out into the street and McCoy would drop ferrets into his pants, detonate things on his chest and set his head on fire.
Oh yeah, he’s also traveled the world doing King Lear with Ian McKellan.
And will also be portraying a certain brown-hued magic user in an upcoming film with Sir McKellan, but he couldn’t talk about that. The Hob… er, the movie’s tightly under wraps at the moment. 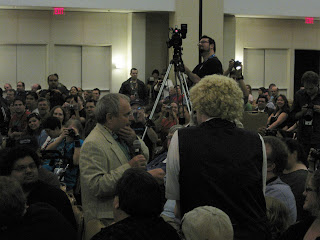 At one point McCoy gleefully snatched the mic from Ken Plume (always a great moderator) and leaped into the audience to take questions that weren’t about The Hob…
After a few questions, we were treated to a little spoon playing: 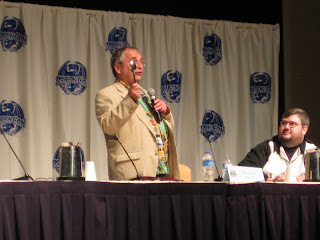 And finally Ken Plume closed out the panel by asking Mr. McCoy what seemed at first to be an odd, if not outright rude question. Plume stated that the Seventh Doctor’s run was often criticized for poor writing. He wondered aloud to everybody if perhaps our esteemed guest would like an opportunity to rise to some of the more superior recent writing from the show’s revival. And we were treated to one of the most awesome things I have ever seen in my whole life.
Sylvester McCoy, the Seventh Doctor, performing the famous monologue from The Pandorica Opens:
Sylvester McCoy Performs Monologue From "The Pandorica Opens" from Phantom Troublemaker on Vimeo.


Holy fucking shit. There were a lot of times over the weekend that I wished I had had the presence of mind (or sobriety) to hit the video button on my camera. But honestly, none of those matter because I captured that.
I didn’t even want to bother with another panel at that point, so I went straight to the hotel to check in. Jeffistopheles, P’aal and Friend Steve were in the lobby just sort of hanging around. We exchanged brief salutations and I went to the desk to check in. Where the man at the desk told me they didn’t have any rooms. He told me that check-in time technically wasn’t until 3 PM and they would have something by then. I fixed the most polite stinkeye in my arsenal upon the little fellow and said, “Um…”
He immediately assaulted his keyboard in much the same way the registration girl had the previous day and apparently found some sort of secret stash of available rooms because he immediately zapped a room key (or whatever it is they do to make a piece of plastic open a door) and shooed me along. Right before I got back to the lobby area I had the bright idea to ask Jeffistopheles if he would help me with my luggage. He might be old, but he’s sturdy and could probably beat me in a foot race. I had no interest in making two trips to get all my bags, the beer and the cooler.
We ran into Gnoll and his ladyfriend on the way out of the hotel. I considered asking Gnoll if he would help with the luggage instead, but worried that such an inquiry might offend Jeffistopheles. Besides, Gnoll was busy being in love and I also didn’t want to recruit somebody I had just met (oddly, this was the first time I met Gnoll’s lady) to schlep my stuff around.
Once we got everything into my room we were closest to the Walk of Fame - the place where they stash the various celebrities that aren’t William Shatner. They keep Shatner in the coat room. Seriously. 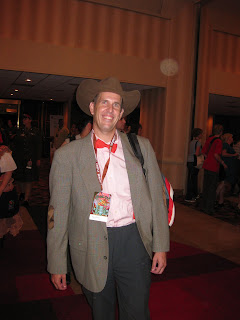 I made a beeline for Sylvester McCoy. I had ordered a figure from JRsToyworld.com for him to sign, but it hadn’t arrived in time. I knew I would have it Saturday, but I didn’t want to chance the good Doctor leaving the Con early. There was a short line for his table, but in no time I was face-to-face with one of my heroes. I forked over the cash, exchanged pleasantries and probably came off like a total goober. The same thing happened with Bruce Campbell when I met him. I was just too star struck to be comprehensible. Whatever. I got my signed picture and met up with my eld... wise companions to show off my gains.
We hit Artists’ Alley next where there was a clear lack of Sienkiewicz. I had a few sketches I was planning on pursuing, but the main thing I wanted was to get Bill Sienkiewicz to sign my Venture Bros. print; which already had Jackson Publick and Doc Hammer’s signatures. A quick sweep around the room revealed that a great number of artists were not even there yet, so I wanted to hit the Dealers’ Room to try and find a lanyard. Also, I needed to grab something to eat so I could take my zithromyacin for the day. Got to keep the antibiotics going. I’m seriously considering just going to the doctor every year before Dragon*Con and requesting the Z-pack just so I can have antibiotics flowing through my system the whole weekend keeping the funk away. 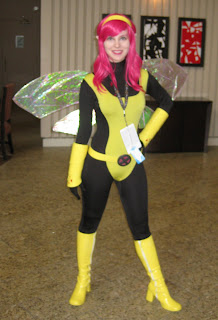 It took forever to make that first trip around the Dealers’ Room and I could not believe nobody had lanyards. Well, let me take that back. Only one booth had lanyards and they had little pink bunnies on them. When I asked about a broader selection she said that was it. How the crap can not one out of eight hundred dealers’ tables have a bunch of lanyards? I mean, I know there are licensed lanyards for Marvel, DC, all kinds of movies. And everybody knows you have to have your badge at all times at Dragon*Con. Why the crap would you not bring lanyards? How is that not a no-brainer?
I finally lucked out on my second time around and saw a guy at the Offworld Designs t-shirt booth just walking around with an armload of lanyards. FOR TWO DOLLARS! Granted, they had the company logo on them and I was basically paying two bucks to advertise for the company, but I will happily support that kind of industriousness. Not only were they smart enough to have lanyards, they were getting people to pay them to advertise. Brilliant.
Once I got back to the room and ate I don’t think there were more than a couple of hours before Friday night’s main event, and that’s not a lot of time in Dragon*Con time. I called home and settled in and before I knew it, it was time for


DCW! DCW! DCW!
Come back Monday to find out if this year’s night of mayhem was as mayhemy as last year!
Will some fat idiot get Lucky Charms bashed over his head?
Will Mickey Rourke make his astonishing return?
Find out next week - same Phantom-time, same Phantom-channel!
Until next time, stay creepy
-Phantom
Posted by Phantom Troublemaker at 7:28:00 PM

Email ThisBlogThis!Share to TwitterShare to FacebookShare to Pinterest
Labels: conventions, dragon*con, life the universe and everything