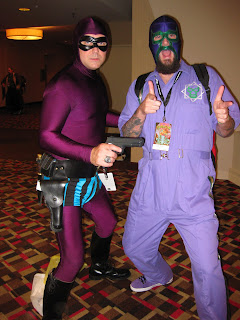 Well, I’m back in reality after seven blissful days of not having to think about my horrible job; four of which were spent at the greatest party in the world, three just enjoying family life. Thankfully I only have to work a couple of days before getting a long weekend off. That also means I only have two days to record all of my thoughts and experiences about this year’s Dragon*Con, so I better get to it.
I almost feel like I’m still a little bit hung over, but that’s just the lingering effects of the funk that apparently got started the night I went to the nudie bar with Gnoll and The Big Guy. See, the family was out of town for a week back in August and Gnoll called to see if I was down for a Gentlemen’s Night. I haven’t been out to the nudie bar in years – not because of wifely opinion but because I spend enough money on stupid shit as it is – so I went. We had a good time, but a couple of days later I ended up at the doctor with a sore throat and some other symptoms. I knew I should have slapped those titties away from my face the first time.

So anyway, I got the two shots and the 5 day Z-pack and felt better after a couple of days.
Then, the Tuesday before Dragon*Con, the guy I relieved at work told me I better wipe everything down really well because he was sick. You see, apparently it isn’t macho to go to the doctor or call out sick; so he just came in and worked and spread his fucking disease all over the place. And sure enough, the very next day my funk was back. Not being an idiot, I went to the doctor and told them I needed to not only be well by the weekend but also be able to consume copious amounts of adult beverages. No problem – two shots and some more of that groovy z-Pack and I felt fine by Friday.
But four straight days of drinking and dorkery take their toll and by Monday afternoon I was feeling shitty again. I wasn’t sure if it was Con Funk or exhaustion or what, but by Tuesday I knew I should go ahead and start my second set of the new Z-pack. I got to relax and hang out with the family some and I actually feel a good bit better right now. I hope if I take it easy over the next five or so days I should be okay. I hope.
But that’s all the here and now, and the here and now is a bit dreary and depressing (the being at work feeling shitty, not the nice family time) compared to the grand majesty of mayhem that was Dragon*Con 2011. So let’s go. 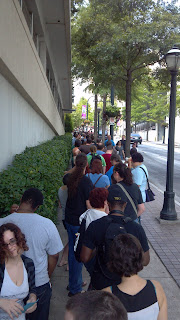 Registration
This portion of the tale might be boring as crap, but it needs to be told because stuff did happen that demonstrates my life and how I live it.
The Dragon*Con crew have been hyping their new registration system all year. Registration has always been an onerous process for the Con; one that often takes three hours or even more. This year there was a new barcode system that was supposed to streamline everything for those that pre-registered. I was cautiously optimistic about the whole thing. I knew there were likely to be problems, but I hoped that 2011 wouldn’t be another three hour year.
Evil and his crew were going down to the Sheraton (where registration is held) at 9 AM, but I don’t do anything at 9 AM unless I have to. I figured I’d get down there at about 11 and hopefully be back home by 2 at the latest. I wanted to have plenty of time to hang out with the wife and son before leaving Friday morning.
There was some kind of hold-up that I can’t recall and I got in line at 11:44. Or at least, that’s when I put a picture of the line up on Facebook.
The fact that there was a line at all did not bode well. Evil had called and told me that it took them about an hour, but let me explain the constant demonstration of Murphy’s Law that is my life:
I could be in line at Target with five people in front of me. Five people with five shopping carts loaded with groceries, underpants, cat food; whatever. Let’s say another cashier opens a different lane and asks for the next person in line. I would personally put a thousand dollars worth of cat food on one of the two following things happening:
And whatever. That’s just how it is and I’ve learned to live with it. I need to stick with whatever I have and be glad it isn’t worse. I know that sounds depressing, but it really isn’t. It’s made me appreciate the little things all the more. Like finding a register with nobody in line and getting checked out in less than five minutes. That’s fucking awesome.
So naturally, the line I was in moved about five feet in the first hour I was there and I eventually found out through the magic of Twitter that the fancy new computers that were supposed to speed up the registration process were down. This is where my outlook comes in handy – I wasn’t even disappointed. I knew beyond a shadow of a doubt something like that was going to happen. 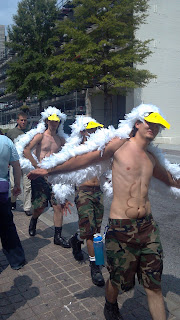 Once they got the computers back up and running it took about an hour to get to the new-and-improved booths with the new-and-improved barcode scanners. It was all still in what I like to call the “Hall of Stink”. Once you actually get into the Sheraton some lines lead you to one of the ballrooms that has been set up like a corral; which is appropriate because that’s about what the room smells like. You go through a series of parallel rows - back and forth - until you get to the front and the booths. About ten rows before the end there was a separate line you could get into if you did not have the postcard with your barcode on it. I seriously considered just getting in that line because it was a lot shorter than the regular line. But I knew that if I did that it would infuriate whatever cosmic entity it is that keeps my optimism in check so I just stayed put and watched the seven people who did get in that line breeze on through in no more than ten minutes. 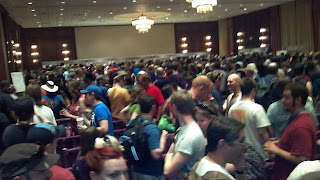 Once I got to the front of the line I was able to examine the booths and their occupants. I think there were about twenty booths and probably eighteen of the people manning (or womanning) them looked absolutely nuts. And that’s not even including the guy that looked exactly like Chewbacca but didn’t have a costume on. But there was this one chick that had half of her head shaved and just struck a bed chord with me. I noticed the person she was assisting had been there an unusually long time compared to the other booths. So I made the mistake of thinking, “Oh, man. I hope I don’t get her.”
HA! What a moron! Because of course when I got to the front I was directed to the half-shaved lady and she scanned my card and frowned and scanned it again and poked her keyboard for a couple of minutes - you know, just to pass the time – and then she looked up at me and said, “Wow! It doesn’t like you!”
“What? Fate?” I almost said.
And she then directed me – guess where? – to the booth with the books of stickers. The one that I had passed on going to about twenty minutes ago.
Maybe ten more minutes passed and I finally got my badge and left. I completely forgot to get a pocket program and one of the big guide books, but it turned out I really didn’t need them thanks to the awesome (and I actually mean that with all of my heart) Dragon*Con app that they had this year. I’ll mention that app several times over the course of my recap and it will always be in glowing terms because that thing was fucking fantastic.
All in all it took me about two hours to actually get my badge. About what I had been expecting, but far longer than what I had hoped for.
Now here’s the magic – the real cherry on top of my Dragon*Con registration Sundae. I got a message from Jeffistopheles later that night. He went down at about 7:30. His message?
“Done in about 5 minutes.”
My reply:
“Awesome! Ass.”
Later on I got another message from Gnoll that his took 3 minutes.
Well of course it did.
Ass.
That's less than I planned for today, but it's all I've got. Come back tomorrow for Day 1 with Sylvester McCoy and then Monday for the best thing ever that isn't Sylvester McCoy or puppets. Or both. Oh, that would be awesome.
Until next time, stay creepy
-Phantom
Posted by Phantom Troublemaker at 8:18:00 PM

Email ThisBlogThis!Share to TwitterShare to FacebookShare to Pinterest
Labels: conventions, dragon*con, life the universe and everything