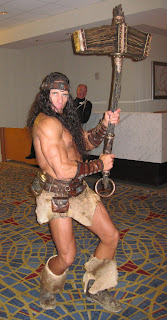 I already rehashed one article from last year (the dragon thing) and I really don’t want to be that cheap again. So I asked Mrs. Troublemaker for an idea. She is often not only inspirational to me but a wellspring of clever ideas that I would never have thought of on my own. It’s wonderful to have a different but similar perspective in such proximity.
Sometimes.
Other times she’ll say something like, “You should write about the guys that are going to be at Dragon*Con that all the girls are going to be drooling over.”
Okay, fine. I’m up to the challenge. My only concern is that I’m really not equipped to make these calls. We already know of one dude that a friend of ours is going to end up molesting and I never would have put him on this list if it weren’t for that. So you’re just going to have to accept that this is a list of desirable dudes from my perspective; which is skewed because I do not, in general, find dudes desirable.

Except for Ryan Reynolds. He’s dreamy.

10 – Misha Collins
If you follow @MishaCollins then you know he’s a funny guy and ladies like that. He’s not hard on the eyes either. But the big reason he’s Number Ten on this list (and the reason he’s not higher) is that because of his character Castiel on Supernatural he’s probably going to draw the sort of crowd that digs that sexless Morrissey vibe. There’s a reasonably big market for that sort of thing, particularly amongst the fringe crowd that populates Dragon*Con.

9 – Gareth David-Lloyd
This list sort of caters more towards my guesses about the ladies’ taste (because I am obviously an expert in that department), but I should try to account for gentlemen who prefer gentlemen as well. That’s why the guy who played Captain Jack’s vacuous little fuck toy gets on the list. I’m probably being a little too hard on Ianto, but the character never developed as much as I wanted him to. Heck, nobody on Torchwood developed as much as I wanted them to. To this day the only person on the show I genuinely like is Captain Jack. Even Gwen has only recently started to be really interesting. But Ianto Jones made a habit out of standing around looking flummoxed and I expected a lot more out of such a beloved character once I finally caught up with the “adult” Doctor Who spinoff. But Mr. David-Lloyd is a pretty boy that both genders seem to find appealing.

8 – Mark A. Sheppard
Mr. Sheppard may not be the sexiest dude on the list, but he might actually be the coolest. He’s been in almost every great genre show – Supernatural, Firefly, Doctor Who, Chuck, Warehouse 13 and The X-Files just to name a few – and he is always cool. Super-cool. It’s always a thrill when he makes his inevitable cameo on your favorite show and it will be no less so when he shows up at this year’s Dragon*Con.
7 - Adam Baldwin
Ladies love a jerk. And while Baldwin may not be a jerk in real life, he has certainly played his fair share of assholes. From the demonic lawyer guy on Angel to his defining role of Jayne on Firefly to (some other thing), Baldwin is great at playing the guy you hate to love. Plus, he’s tall and I think easy to look at. Am I right, ladies? (HA! Like any ladies are reading my nonsense, especially after all the Feminist Batgirl stuff) If you doubt this guy’s appeal, just look around at how many people are wearing his stupid hat.

7 – Colin Ferguson
We all know him as patient, understanding and Occam’s Razor-like Sheriff Jack Carter on SyFy’s Eureka!. Ladies know him as “That hunky guy.” Apparently. Personally I think Ferguson, Mike Rowe and the guy from Human Target are part of some dastardly conspiracy of clones inhabiting our televisions with wry, ruggedly handsome men that we regular guys can’t hope to compete with.

6 – Doc Hammer
Ladies love The Venture Bros. Ladies love pale, skinny dudes. Ladies love rock stars. Ladies love an acerbic wit. Doc Hammer is all of these things and more. While he may not command quite the same size following as some of the others on this list; Hammer’s is easily twice as rabid. Venture fans are fucking crazy. Few shows have as much costumed Con representation as Hammer’s little cartoon, and that cartoon has some weird, intricate costumes. But people figure it out. I don’t know if Doc is the sort of person to take advantage of this sort of thing, but he could pull down some major poon at Dragon*Con if he wanted to. 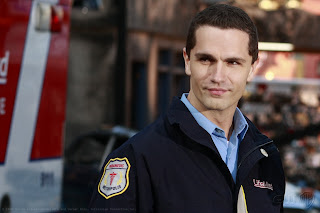 5 – Sam Witwer
While not necessarily a fresh face, Mr. Witwer has only in the last few years become a true force in the game of nerdery. He’s the protagonist of the excellent Star Wars: Force Unleashed series, he was the totally emo Smallville version of Doomsday and now he’s a hot vampire stud on SyFy’s surprisingly good remake of the British supernatural drama Being Human. And from what I understand he’s super hunky. I don’t know – if that were true I’d think he could do better than Chloe Sullivan. Blech.

4 – Wil Wheaton
Considered by some to be the King of the Nerds, Wheaton overcame his role as the unbelievably irritating Wesley Crusher on Star Trek: The Next Generation to become sort of the ultimate symbol of nerdy sexiness. Or something. I think he got a big advantage when they introduced Whorf’s son, Alexander. Nobody seemed irritating with that little bitch around. Either way, Wheaton might as well refer to himself as LL Nerdy W because Ladies do Love Nerdy Wil.

3 – James Marsters
I doubt there’s anybody at Dragon*Con as likely to moisten panties as Spike himself. Mr. Marsters is not only a world-renowned heartthrob due to his role as the Big Bad turned True Love (according to some) on Buffy and his brief but memorable cameo as the Captain Jack snogging Captain John back when Torchwood was still interesting; he’s also a rock star. Very few lines are as consistently long as the one at Marsters’ table and few non-A-list stars command as high a price for a photo or signature. I know if I left Mrs. Troublemaker around this guy unattended for more than a few minutes there’d be trouble.

2 – William Shatner
Yes, he is a very old man, but Shatner has so much going for him. First and foremost he is Kirk. The Kirk. Others may play the role, but none will ever be James T. Kirk in the way that Shatner is. Also, he’s Canadian. Canadians are nice. Really nice. While your younger girls may not go for that, older more intelligent ladies understand the appeal of somebody who isn’t an asshole. Finally, Shatner loves to listen. This is without a doubt the number one most appealing quality to almost any female in the world. And we know from Shatner’s interview show – Shatner’s Raw Nerve – that he is a master of listening and understanding feelings. This makes him a very desirable catch. 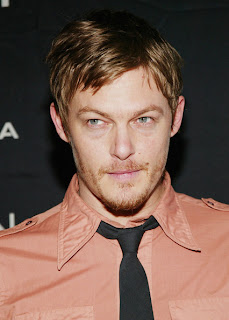 1 – Norman Reedus
And this is the big one. Mr. Reedus – of Walking Dead and Boondock Saints fame is number one simply because he is the guy that our mutual friend is going to be touching in inappropriate ways. This is verifiable proof that he is a walking sex magnet in a way that no other individual on this list is. Actually, we may have more than one friend attempting to assail Mr. Reedus’ no-no bits. Darth Pete is an unreasonably big fan of Boondock Saints. Not sure how he felt about the sequel, though. The love might be gone.
I asked my wife if she would submit her own list for consideration. No commentary, just a top ten. This is all she could come up with, in no particular order, though when I mentioned Misha Collins she went, "Ooh, yeah! Definitely him!":

I was going to do my own "Hot Ladies" list, but I was surprised to find out I could only come up with a few myself:
Julie Benz
Clare Kramer
Eliza Dushku
and maybe the lady that played the president on Battlestar. She's pretty hot for an older lady. Old-timey dudes would refer to her as "a handsome woman".


Until next time, stay creepy
-Phantom
Posted by Phantom Troublemaker at 11:00:00 AM