Toy Review – Masters of the Universe Classics: Man-E-Faces By Mattel 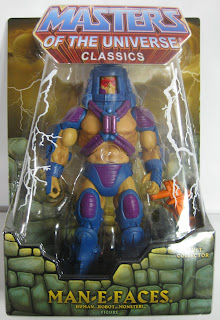 Man-E-Faces was one of the highlights of the Masters of the Universe Classics 2011 subscription for me. He has a great action feature and one of the most distinctive looks of any of the Masters. Yet the Horsemen still managed to do a masterful job of reusing parts.
I was stoked about getting this guy (and the other August sub figure – Megator) and managed to hold out until I opened him to find out what the promised “secret accessory” was. We’ll get to that in a minute.
There was some drama involved in Man-E’s release, though. If you don’t know how Matty subscriptions work, here’s the deal:

Approximately one week before the online sale date your subscription will “renew”. You’ll get an invoice for whatever items are included that month, with the shipping costs divided among the items so the gouging doesn’t look quite so bad. Then, approximately one day before the online sale date your items will ship. This used to mean you would receive your package about five business days later, now it’s kind of a crap shoot.
In August many Club Eternia subscribers were dismayed to see that they had been charged for the $40 Megator but not the $20 Man-E-Faces. Obviously this is a problem, but it was exacerbated by the fact that Man-E-Faces is probably on pretty much everybody’s Top 5 Masters list. People were really excited about getting this guy. So the Matty forums blew up.
To their credit, Matty addressed the issue reasonably quickly and took the blame for failing to notify the World’s Shittiest E-Commerce Business (3 years running), Digital River, that Man-E was part of the August subscription. This seems like a pretty stupid oversight, but for the most part I think people were unaffected. It may have taken a bit for some of the incorrect charges to be taken off of credit cards, but that’s just how credit cards work.
Luckily, I didn’t have any problems. My “renewal” went through fine the first time and my figures came on Monday. Good enough.
Oh, and if you don’t want to know what Man-E-Face’s secret accessory is you should stop reading now. Because it’s a fez like the one he wore in the episode where he had to go undercover and infiltrate Skeletor’s scam charity organization. Skeletor set Mer-Man and Tri-Klops up as the heads of a charity that was supposedly raising funds to support Eternian kids who were born without hideous mutations or weird powers. Naturally it was all a front for Skeletor’s money laundering and Man-E-Faces and Photog posed as volunteers and collected enough evidence of fraud for Duncan and the rest of the Palace Guards to bust up the racket. Later, He-Man showed up and punched Skeletor. Lawsuits are pending from Skeletor’s sleaziest henchman – Legal-Eze. While this episode was hated by kids, the 36-48 demographic loved it, leading to the creation of such animated procedural dramas as Law & Order: Eternia and popular dental forensics series Doctor Mo-Larr: DDS.
I just made all that up. He comes with an extra head. 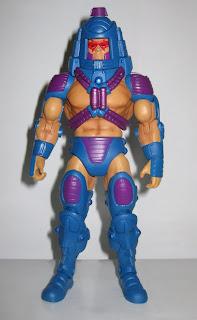 First Glance: Wow. Man-E-Faces sure is… fleshy. My initial reaction was that they probably should have gone with orange rather than a flesh tone, but now – as so often happens – my brain has made up a story for Man-E that makes me kind of prefer this for humor’s sake.
With all that flesh showing under his weird harness and thigh-high boots, Man-E-Faces looks like he’s wearing some kind of futuristic fetish gear. Like an Italian sci-fi movie. So now I feel that Man-E-Faces – an actor in the animated series – is Eternia’s resident S&M guy. Hey, they’ve got a dentist, right? Before I could do anything about it, my brain had already envisioned Man-E-Fetishes’ little dungeon under Castle Grayskull – complete with Stratos on the rack (‘cause you know that guy’s a freak) and Teela in a cage. Instead of schoolgirls or nuns, naturally Eternians are going to want monsters or robots. And Man-E-Fetishes can provide either.
Yes – I know I have issues. You should see my scrapped submissions for the Create-A-Character contest Matty’s running. 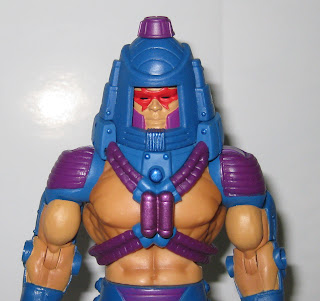 Sculpt: I didn’t realize it until I got Man-E-Feti… Faces out of the package, but this figure is almost entirely farmed parts. But in a good way. Well – an acceptable way. He has all the standard MOTUC articulation. Man-E’s lower portion is shared with Trap-Jaw, Optikk and Roboto. He has new arms, but his torso is what surprised me most. I thought at least his upper torso would be a new sculpt, but it is the standard human chest. The Four Horsemen recreated Man-E-Face’s look by use of a clever harness and a helmet that plugs into the top. You really don’t realize it until you have the figure in your hands and it’s quite an ingenious alternative to sculpting a whole new piece. The whole thing looks great and functions very well, especially given the “secret accessory” and possible future additions. 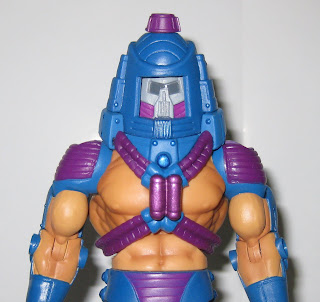 Man-E-Face’s primary head looks fantastic. All three faces look superb and the mechanism to switch between them is perfect. The setup is exactly like (that guy) from the Horsemen’s other amazing line, The Outer Space Men (which I called). You take off the helmet piece and pull the plug out of the top. Put in whichever head you desire and put the plug back in, then plug the head and helmet into the neck. Simple and great. There are even notches to hold each face in place. 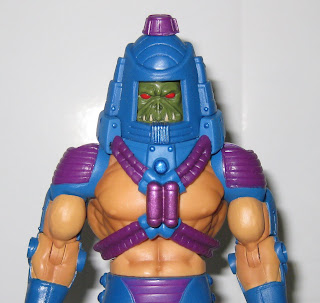 The monster face is still my favorite.
The only thing I don’t like here is that Man-E’s arms are molded from a very soft plastic. It seems that the quality of plastic being used in 6” scale figures is continually going down and I don’t find it acceptable. Not only does this softer plastic have a much greater chance of simply shearing off at the joints if there are any sort of QC issues, it just makes the figures feel so damn cheap. And if there’s one thing that Matty figures aren’t; it’s cheap.
Otherwise Man-E-Faces is great. His different build does not interfere with his movement and my figure does not have any overly loose or tight joints. 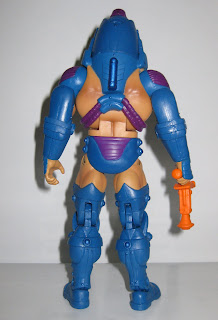 Design: Since I’m now sold on this weird “nude” look, I like the design. I can’t remember if Matty had a survey or if the Horsemen and the Matty desing team just made the call, but back whenever they gave us our first look at Eternia’s premiere thespian we were presented with the options of flesh tone or orange. I wanted orange (I think it was a vote). I still don’t feel I was wrong, but at least the ol’ hat rack can justify Man-E-Naked.
As with all MOTUC releases, there’s plenty of detail all over Man-E’s armored/clothed parts. Little bits are painted and the detailing brings the figure to life.
The faces are each amazing. The monster’s teeth and eyes stand out, the robot’s deco is tight and even and the human face has character despite being squeezed into that little opening. I’ll get to the alternate head in the next section. 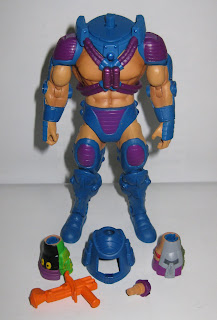 Accessories: Man-E-Faces comes packed with his signature blaster and an alternate head – the famed “secret accessory”.
The blaster is a fine update of the original and is molded from a firmer plastic. The only problem is the paint job. This is the first truly sloppy paint app I have seen in the MOTUC line. At first I was appreciating all the little metallic yellow details on the blaster, but then I realized most of them were off-center or misplaced. Very disappointing. 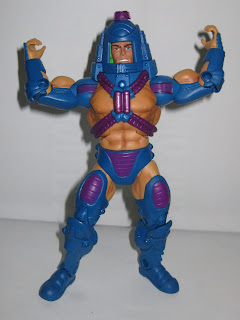 The alternate head is a fun pack-in. It features faces for He-Man, Skeletor and Orko. The He-Man face looks good, but how hard is it to nail He-Man? 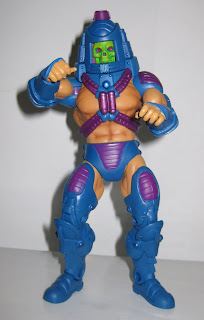 Skeletor looks awesome and is much creepier than Skeletor’s actual face (until I put that Demo-Man head on mine, anyway). 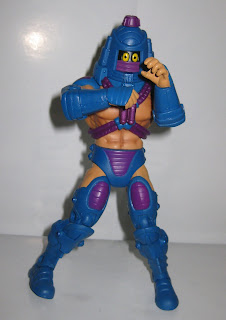 Orko is fucking stupid. I have made no apologies for my open hatred of this original representative of the Annoying Sidekicks Club and I never will. But my problem with the Orko face doesn’t just stop at how much I loathe the character. I also have a problem with the inaccuracy of the face itself. When Man-E-Faces switched to Orko’s face in the original cartoon, it came along with a giant floppy hat and a scarf. No such items are included here, so the look is inaccurate. I had called Beast-Man as the third face and I think that’s what the Horsemen should have done. Still, the door remains open for many more alternate heads (probably to be included with an orange Man-E) and for what is essentially a freebie that came with a great figure I can’t complain. Too much. 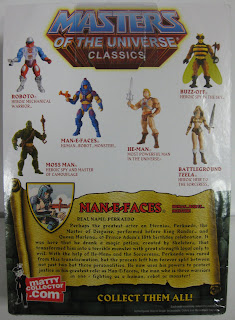 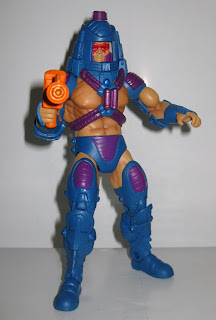 Overall: Man-E-Faces has some minor flaws that keep him from a perfect score. The sloppy deco on the gun is obviously an issue, but the soft arms really bug me too.
4 out of 5
But not enough to knock off more than a point. This really is close to a perfect figure. I would have preferred the orange coloring, but that’s personal preference and not quality.
Matty has stated that there will be no more reissues past Man-E-Faces, which suggests that Man-E might be reissued at some time in the future. However, if you want him (and you should) I recommend you go on over to BigBad and order one. Of course, you could also wait and see if they do an orange repaint, but then you’ve got nobody to man your Eternian sex club.
Until next time, stay creepy
-Phantom
Posted by Phantom Troublemaker at 11:00:00 AM