Toy Review – Masters of the Universe Classics: Zodak By Mattel 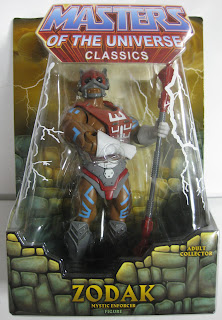 I could’ve gone crazy on Matty’s All-Star sale (still going on now) and bought duplicates of Trap-Jaw, He-Man, She-Ra and other stuff I really don’t need. It was very exciting to see some of those things available again after so long. I’m sure a lot of people succumbed to that temptation. But I was stalwart and conservative – two things that do not come naturally to me – and only ordered a single figure. Zodak.
He was the only thing offered that I did not already have, and this happened to be the version I prefer. See, Zodac is the cosmic guardian from the original Masters cartoon and Zodak is the one from the 2002/3 version. I think they’re cousins or something. I like this one better because he’s a black guy and he has glowing tattoos.

Aside #1: Matty really could have gotten me with a slightly different sale. If they had reissued Man-At-Arms, Teela and Beast Man I would have spent a lot more money. Heck, they could have gone with the Eternian Palace Guards and gotten me, too.
I was initially irritated because Zodak got shipped via Newgistics – an utterly shitty new carrier Mattel decided to use because they love things that suck. Newgistics utilizes the revolutionary shipping method of delivering your packages to your local post office rather than your doorstep. This costs exactly the same as other services but adds 2-5 days to the delivery time. It’s genius. Last time my Battleground Teela took an extra five days, but Zodak only took an extra two. I felt like such a lucky little boy. 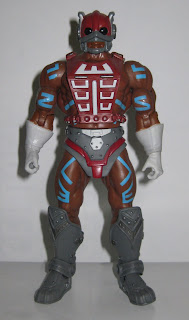 First Glance: I’m not a huge fan of the original Zodac design, but the variances in the newer version make all the difference. He’s just a very cool looking figure. 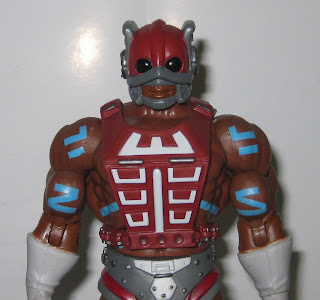 Sculpt: That helmet is just great. The big, bug-eyes and exposed mouth with surrounding apparatus look so cool. Actually, whoever designed this headgear is a genius. It stands out as one of the prime examples of why Masters of the Universe is such a cool, enduring property.
The body is the standard MOTUC sculpt with cool gloves and super-ultra-cool boots. I understand that these are He-Ro boots and they are outstanding. The foot part looks like Boba Fett’s and the upper portion is this cool techno-kneepad thing. I hate to go on so much about action figure footwear, but these are some of the coolest boots I have ever seen on a toy. Well done, Four Horsemen.
Aside #2: I’m not positive about this, as I don’t yet have a He-Ro. But I want one, as well as a King Grayskull and a Wun-Dar. Help me out, people. I’ve got Sy-Klone, a Shadowbeast and Battle Armor Skeletor to trade. And a whole shit-ton of non-MOTUC stuff.
My Zodak has tight joints and does all the things you might want him to do – he poses very well. 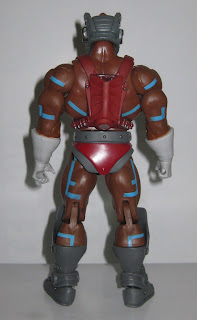 Design: The paint on Zodak’s head is tight and nice to look at. The flesh portions stay within the confines of the mouth opening and the detailing on the helmet looks great.
The figure has the standard body wash to highlight the musculature and the blue cosmic tattoos (or whatever) look good. The paint used almost makes them look sort of glowy. The gloves and boots look good. I might have been tempted to put more painted detail on the boots, but that probably would have looked stupid. 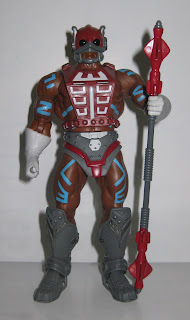 Accessories: Zodac comes packed with his Cosmic Staff of Guarding (or something) and a unique chest plate.
The staff is sturdier than I expected. It’s molded out of a harder plastic and I was expecting the soft shit Mattel normally uses. It was a pleasant surprise that the figure’s weapon wasn’t bent nearly in half when I took it out of the package.
The chest piece is cool and compliments the helmet very well. I didn’t remove mine because pantsless Zodak is as far as I am willing to go. You may do as you like with your Cosmic Protector. 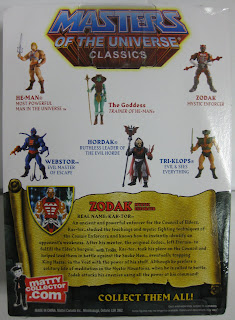 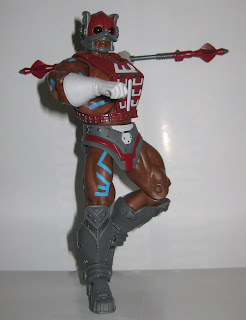 Overall: I’m really glad I ordered this guy. He looks great on my Babyface Masters shelf (though I guess he’s technically a Tweener) and his weapon presents the opportunity for a unique pose. I couldn’t find a darn thing wrong with him.
5 out of 5
I highly recommend you order a Zodak if you don’t already have one. He’s still available on Mattycollector.com as of this writing. Use that link if you go there because Matty is fundamentally retarded and does not have a link to the All-Star sale anywhere on their main page. Never mind. They fixed it. But they're still mentally challenged.
Until next time, stay creepy
-Phantom
Posted by Phantom Troublemaker at 11:00:00 AM