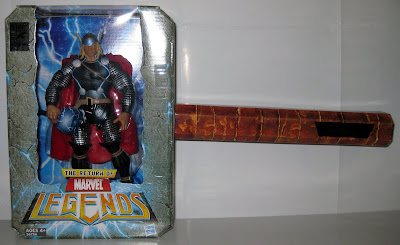 This Comic Con Exclusive figure of the God of Thunder that isn’t the bassist for the greatest rock n’ roll band of all time was touted as the big return of the much-beloved Marvel Legends line. I’m not sure how significant that is since the line’s last releases hit less than a year ago, but I appreciate the sentiment.
This is one of the SDCC Exclusives that I was willing to miss out on if I couldn’t get it for regular price. I’m not a huge fan of the way Olivier Coipel draws Thor – which is what this figure is based on – but it does make a good looking toy and the MSRP is lower than what I would have to pay for any other Marvel Legends Thor at this point. I was fortunate enough to get an order in on HasbroToyShop.com in the brief time Thor was available, so I’ve got one to review for you today.
It’s odd for me to buy an SDCC Exclusive just to fill a hole in my collection, but I had never purchased a Marvel Legends Thor. I wasn’t really too big into the character until I saw the movie and now I want to catch up. I’ve got the Simonson omnibus on order at the comic shop (where is that thing, Varis?) so I can read the best of the best. And now I’ve got a figure. 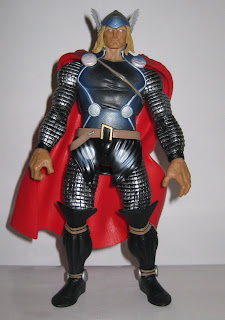 First Glance: The Mjolnir-shaped packaging is brilliant. And Thor is absolutely huge. He looks to be about the size of a Masters of the Universe Classics figure. Pretty impressive, but is he going to look too weird with the rest of my Marvel Legends Avengers? 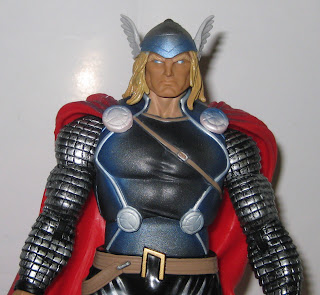 Sculpt: Thor has about what you’d expect articulation-wise from a 6” scale figure nowadays. Ball-joint or analog neck, shoulders, wrists and hips; double-jointed knees; pivot ankles; swivel waist and an abdominal bell joint analog sort of thing. His elbows are the clever pivot with a swivel at the top that Hasbro has been using on the Star Wars line. It works well and looks so much better than a bicep swivel. His knee joints are ugly as sin. I don’t like the way those are designed at all. The top portion is fine, but the lower portion separates the knee from the calf almost entirely and looks very odd. All the rest of the joints look great and have a good range of motion, though.
The head sculpt is very much Coipel. Like I said, I don’t care for it in print but it looks great as a figure. It’s a stern and noble countenance that works great for the character. The helm looks great and the hair looks good and doesn’t interfere with the neck movement.
Thor’s cloak is nice, but I’m kind of torn on whether I think these sorts of things should appear static or wind-blown. I guess mildly wind-blown is the happy medium, as that’s what Hasbro went with for Thor and it looks pretty good. Thor’s armor and clothing all look great. His upper torso is a softer plastic that works well with that abdominal joint. All of the scale armor looks very nice and is tremendously detailed.
Thor’s legs are good, but those knee joints really are just awful if you bend them. Also, the lower legs are made of a softer plastic that doesn’t seem incredibly sturdy. I don’t think it’s going to be a problem, but it is a little disappointing to see Hasbro going the Mattel route.
Thor’s belt has a dangling strap that unfastens. I believe this is to hang Mjolnir on when it is not in use. 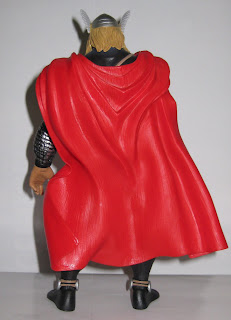 Design: Thor’s paint job is nothing but solid. He looks like he was colored by one of the digital shops that does all the comics now. I particularly like his eyes – they’re so pale as to be almost white and it looks cool; like he’s channeling some lightning (which, judging by the deco on Mjolnir, he is). 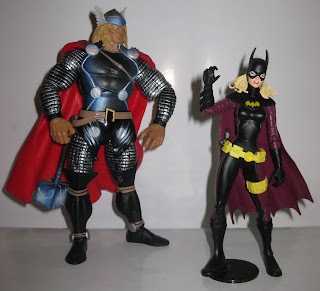 Feminist Batgirl – “This is another… uh… hi there.”
Thor – “Greetings to thee, fair maiden!” 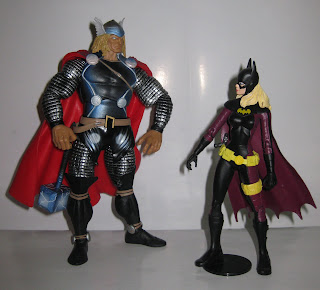 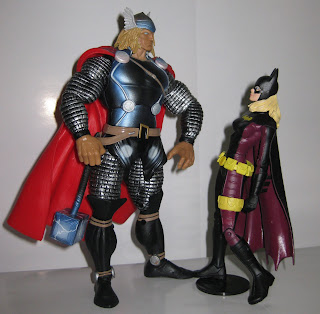 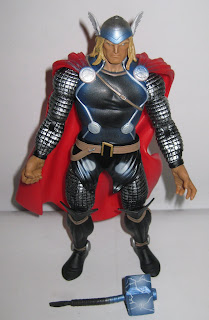 Accessories: Thor comes packaged with Mjolnir and an exclusive poster. I haven’t taken the poster out because it’s rolled up in the handle and looks like it’ll be a pain in the ass to get out – possibly even messing up the packaging. I’m a little torn on Mjolnir. On the positive side, it has these awesome looking lightning bolts painted on it and it looks fantastic. On the negative side, it has these awesome looking lightning bolts painted on it and you’re kind of stuck with it that way. Much like the “wind-blown” cloak, I’m not a huge fan of static action figures with features that suggest action. Because of the cape design and the Mjolnir deco, you now have a Thor that looks weird when he’s just standing there. I can just imagine Iron Man being all, “Dude – uh… is your hammer okay? ‘Cuz it’s totally lit up there…”
Thor can’t hold his permanently lit-up hammer very well, either. His grip isn’t tight enough so he has to hold it high up on the handle, which I think looks weird. I also wish you could put the strap around his wrist.
Finally, Mjolnir is made of rubber. I’ve given Mattel all kinds of shit for making their accessories out of rubber, so I’m not letting Hasbro go on this one. It’s not okay. I almost wonder if they made his fist loose intentionally so that Thor couldn’t grip his weapon any further down and get the inevitable droop that would occur after the heavy head sat up too high for too long.
So Mjolnir looks great, but is ultimately kind of a letdown. 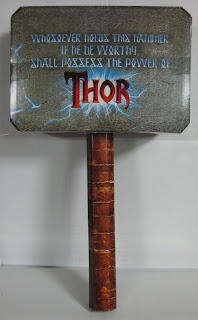 Packaging: The packaging, however, is fantastic and is probably a big part of why you’re going to want this figure. It’s in the shape of Mjolnir and is even about the right size. The whole thing is made of cardboard, so you’re not going to want to swing it around or anything, but it is sturdy and should display well on your shelf. It even has the “He who wields…” script printed on the back rather than product info or something.
Thor can be removed easily and will go right back in if you’d prefer him displayed that way. I still haven’t made up my mind on that one. 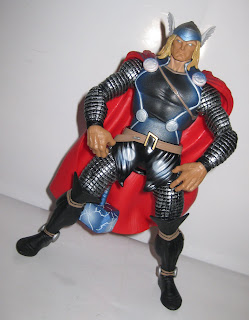 Overall: This figure looks outstanding in the package and almost as good outside of it. I wish the knees had been designed differently and that Hasbro had given us a second, plain Mjolnir. Other than those things this Norse legend is well worth the $24.95 asking price.
4 out of 5
Well, I also wish Mjolnir hadn’t been made of rubber. And that Thor could hold it. As far as the actual deco, I can accept it since this is an exclusive. I wouldn’t want a retail version to have it, but exclusives should have neat little extras like that.
Thor is long sold out from Hasbro’s shop, but you can get him on eBay for around a billion dollars. 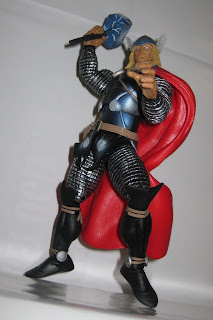