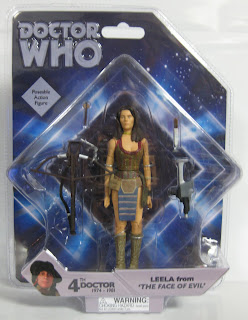 Leela is my favorite Doctor Who companion. After being introduced to the Doctor and the TARDIS with The Five Doctors she was the first regular companion I was presented with on Saturday nights and none have ever quite matched her combination of smarts, hotness and independence. Though Amy Pond is making a go of it.
After the announcement last year that Doctor Who Classic toys were going to be fewer and farther between and mostly store exclusives I really didn’t feel too confident that we’d ever actually get a Leela. I felt certain we’d get Romana or a young Sarah Jane long before we got this warrior woman.
But then all of a sudden there’s this picture of a box full of Leelas smack dab in the middle of somebody’s SDCC coverage. And not even an exclusive, just sold first at the show. I immediately started looking for somewhere to preorder one. JRsToyWorld was my first stop. While I have a lot of loyalty to BigBadToyStore, JRs has great prices and really caters to Doctor Who fans. JRs put a preorder up first, but BBTS actually listed Leela as in-stock but for a dollar more. And for the difference of a dollar and in the interest of sticking with the site that is more Who-centric I went with JRs. And get this – the figure was in-stock on Monday and came on Thursday. Awesome. 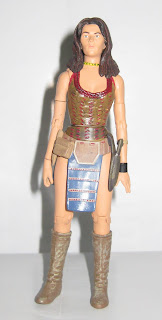 First Glance: The first pictures I saw showed that the figure looked good. In hand it looks even better. That face sculpt is dead-on and there is far more detail on Leela than I would have expected. 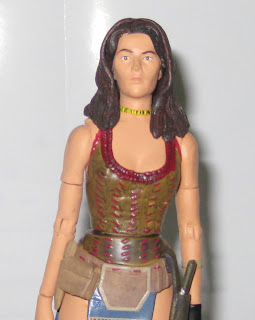 Sculpt: This is such a great head sculpt. Underground has some very talented people who have a knack for capturing likenesses at this scale.
I’m still waiting for some better shoulder articulation out of this line. (I actually had to come back and correct this. Leela has improved shoulder articulation - ball-jointed shoulders at last!) As things stand this figure sports swivel biceps, wrists, waist, neck and boot-tops; pivoting elbows and knees and a brand-new kind of hip joint (for this line). Leela has straight-up ball-joint hips that are somewhat more limited than the rest of the Doctor Who line but make the bare-hipped figure much more aesthetically pleasing. I’m glad Underground decided to vary from the norm because those hinge joints - while perfectly acceptable when blended into clothing – would have looked ugly on flesh.
Leela’s attire has so much detail that I had to go back and take another look at The Face of Evil just to reassure myself that Louise Jameson’s costume was really this detailed. It was. Much like her Doctor, Tom Baker, she had more costume changes than I had realized. I really thought Leela was pretty much restricted to either her dark skins or her light skins (which I don’t like nearly as much). This costume has many different parts. The corseted top looks great and is more than just a piece of leather. She has a belt with some pouches and a loin cloth with ties on the side. There is a purely ornamental sheathed knife on her right side, but the included knife fits nicely into the sheath on her left. Leela’s boots are also sculpted very nicely.
The Sevateem woman can hold her knife, blaster or crossbow equally well. It is a bit of a trick to get that crossbow quarrel to stay in her hand, though. 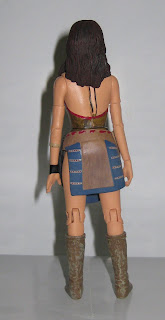 Design: As with every Underground release, the paint on this figure is fantastic. Well, mostly. After I opened mine I noticed that there is a smudge on the tip of her nose. It’s fairly unsightly up close, but I don’t even notice it when she’s on the shelf so I’m not going to bother trying to return her. I’m sure we’ll get at least one more repaint of this figure, so I can live with that small flaw. The actual application of the paint on the head is great. It complements the sculpt very well and Underground resisted the urge to put make up on the face.
The clothing looks amazing and reflects exactly what is on the screen in The Face of Fear. From the painted details on the top to all of the subtle patterns on the loin cloth to the different painted portions of her belt – this Leela is very lifelike. 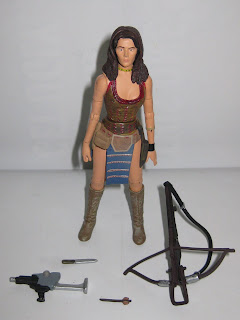 Accessories: Leela comes with a fair number of accessories for a Doctor Who Classics figure (which she should, at this price). Included are a knife, a crossbow, a quarrel and a blaster. All of the accessories look great and have multiple painted details. They all interact with the figure as they should, right down to the crossbow fitting across Leela’s torso but still looking right while she’s holding it. This is an unusual accomplishment for this sort of item. Hasbro still has trouble making weapon straps look and fit correctly. 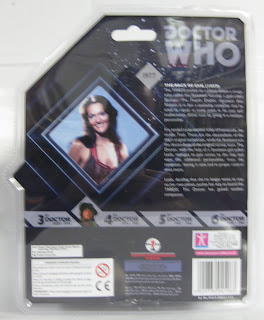 Packaging: Sorry for the terrible pictures of the packaging. I don't know if I was drunk or it just didn't photograph well. Awesome new packaging. The design is simple and classy – a HUGE improvement over the garish orange and yellow of the previous series of Classics. I hope this signifies not only a change in direction but a new line of Classics, as well. I can’t imagine they’d do such a nice redesign for a single figure. The new style looks ready to support a wide variety of figures. I suppose time will tell, as Underground is probably the least forthcoming of any of the toy companies. It’s not unusual to hear of a release a week before it becomes available.
It’s worth noting that Underground used a fairly bad picture of Louise Jameson on the cardback. She is a smoking hot lady and that shot doesn’t really capture that. 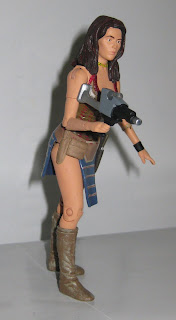 Overall: I wasn’t going to fault the figure for the smudged nose paint, but it really is a flaw; regardless of whether it occurred during production or due to packaging. If this was a DCUC figure I’d be knocking a point off, so in the interest of fairness:
4 out of 5
This version of Leela far surpassed my expectations. While I really wish that Underground would adopt different shoulder joints and make those bicep swivels a little more aesthetically pleasing; Leela is excellent within the constraints of the line. You can get one from BBTS, Entertainment Earth or JRs (unless they’re sold out). Twenty-five bucks is definitely steep. I know I bitch about how much DCUC and MOTUC cost all the time and it’s probably not fair of me to happily fork over even more money for an even smaller figure. But you have to consider that the Doctor Who toys share very few sculpts and that I love Doctor Who more than pretty much anything and went decades with zero Doctor Who toys. So they’re worth it to me. Your own mileage may vary. 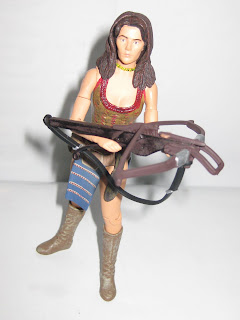