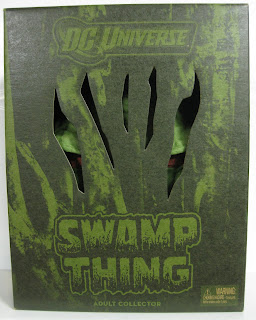 I was very excited about this figure when Mattel first announced it back at Toy Fair. I’ve been a big Swamp Thing fan ever since I was a kid. The first movie used to scare the shit out of me and I loved it. It was then that I decided I had to have a Swamp Thing action figure. I also picked out a Swamp Thing comic in the first stack of comic books I ever bought. I don’t know which issue it was, but it was around the same time as one of the Brood issues of Uncanny X-Men and a story about Hugo Strange’s ghost in Detective Comics. Maybe someday I’ll sit down and figure out what those issues were and hunt them down. It’d be kind of nice to have copies of the first comics I bought.
Years later Swamp Thing got a TV show. I remembered it being very good and much more sophisticated story-wise than the movies. It was recently released on DVD and it turns out I remembered wrong. To be fair, we only got through the first two episodes. It was awful, but maybe it got better. We might go back someday, but it’s going to take a while for those wounds to heal.

And then some fool made a Swamp Thing cartoon. I remember it as not being very good, so there’s no telling how awful it really was. The good thing, though, is that we got our first-ever Swamp Thing action figure out of the deal. Several, in fact. I only ever had the one with the retractable hand on the end of a string because it looked the closest to what Swamp Thing was supposed to look like. There were also Bio-Glow (glow-in-the-dark) versions (I’d love to have one of those now) and one that sort of turned into a compost heap or something. They were perfectly good toys for the time.
The next Swamp Thing we got – and I believe the last until today’s subject – was in the very first series of DC Direct action figures. It looked okay and I bought it because it was Swamp Thing. Unfortunately it was another of many casualties of living with scumbags over the years.
This brand-new Swamp Thing aspires to be the best yet. Mattel really went out of their way to make this figure innovative and exciting. The question is – should they have? 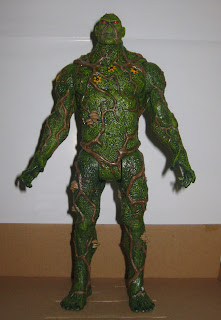 First Glance: Too big. Waaay too big. The box is too big, the figure is too big. But it does all look kind of… magnificent. 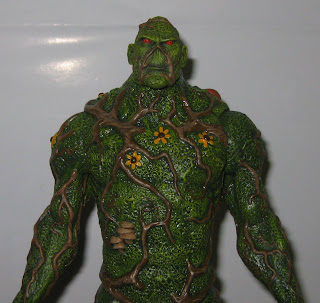 Sculpt: This is where Swamp Thing is supposed to blow your mind. Aside from his head, he is formed of a rubbery skin over an articulated armature. The only visible points of articulation are at the neck, shoulders and hips; but the figure also sports pivoting elbows, wrists, knees, ankles and an abdominal rocker joint. It looks pretty amazing when you’re judging the figure on its own merits. The detail on the skin is nothing short of astonishing. There are roots, flowers, tubers, moss, lichen and even the base layer of “skin” has this organic texturing. Not a hair’s breadth of this figure is untextured. The face looks great and reflects what you know from the comics. The hands and feet look excellent, as well. The individual fingers and toes are detailed and distinct. 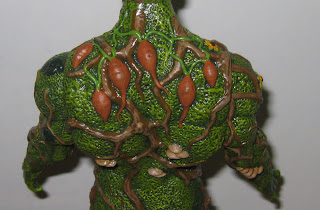 The potato-looking things on his upper back are really grossing me out, though.
The hidden articulation works fairly well. Obviously none of the hidden joints have the same bending depth as an average figure, but the range of motion is perfectly acceptable for a guy that is mostly either standing around in shadows or picking dudes up by the throat.

He is, however, far too large. While I do like a larger action figure, Swamp Thing really should have been no larger than a MOTUC figure. As it is he stands taller than any of my build-a-figures and that’s just not cool. He looks weird on my DCUC shelf and I just don’t know where else to put him.

This is a great action figure, but I honestly would have rather had one that was sized properly and had normal DCUC articulation. I appreciate what Mattel did here and I’m not sorry I have this, but we’re going to need another, smaller one down the road. 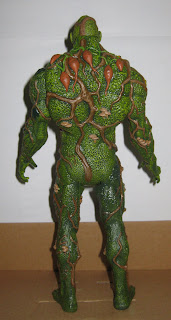 Design: The painted detail on this guy is also fantastic. He looks pretty much just green when you first set eyes on him, but there are tons of paint apps here. Much like the sculpting, very little of Swamp Thing’s surface area goes without some sort of painted detail. While he is mostly green, there are many shades and a staggering number of little details. 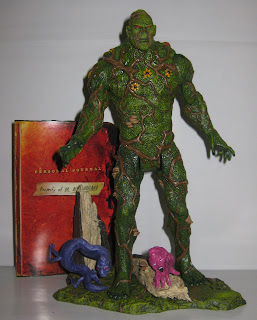 Accessories: This version – the San Diego Comic Con Exclusive – comes with a small diorama/stand, a file insert about Swamp Thing/Alec Holland and two Un-Men figures. The Matty version does not include the Un-Men. 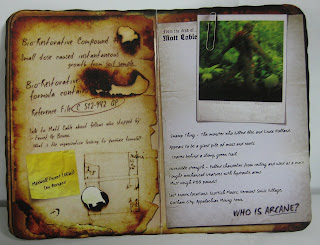 The stand looks nice. While I’m not partial to this sort of thing, I believe it will be necessary to keep the figure standing up in the long run. This thing has a nice… 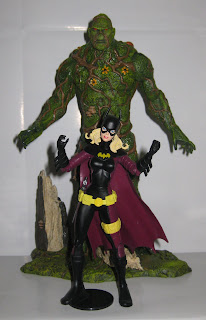 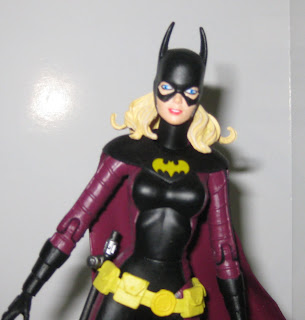 Feminist Batgirl – “You are not respecting my views as a female.”
Me – “Then how about the Un-Men? You’ve got to appreciate that, right?”
Feminist Batgirl – “Yes. It’s totally great that the only specifically named non-masculine thing about this whole situation are subservient freaks. That’s inspiring.” 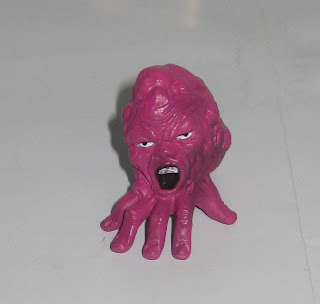 Speaking of the Un-Men; they are some nasty little buggers. I know they have names but I don’t know what they are so we’re going to call them Pinky and Purply. Pinky is just awful. It’s a head with a hand for a body and it is much grosser in person than a picture can convey. 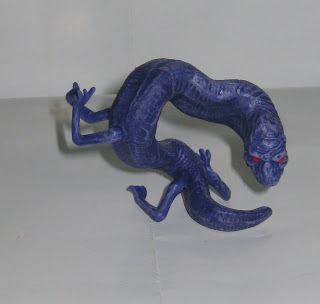 Purply is some kind of skink or something and is almost cute in comparison. Both are very reminiscent of Bernie Wrightson’s style (though I don’t know if he designed or ever even drew them). The sculpt and paint are great and I’m more glad to have them than I thought I would be. They come sealed in a separate baggie and wrapped in paper, so unlike Swampy himself once you open them it can’t be undone. Or Un-Done, if you will. 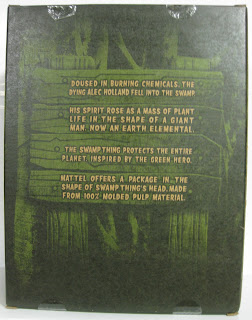 Packaging: Swamp Thing comes in a giant, green box with die-cut trees on the front. When you open that box you find a weird, paper mache-looking Swamp Thing head with red eyes. 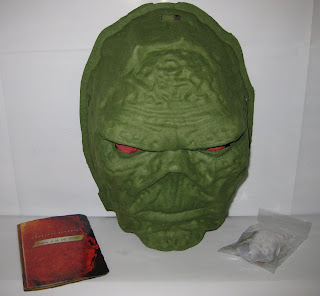 The back of the head opens up to reveal your Swamp Thing figure and the other goodies.
Overall: When an action figure’s worst flaw is that it’s actually a little too awesome that’s something I can live with. This guy is totally worth it, but be warned: he is not in scale with your DCUC figures. Unless you count the times Swamp Thing has gotten all giant and that’s not really the version I want. The figure is excellent, but I honestly do think the size was a mistake.
4 out of 5
I strongly believe we’ll end up with a more properly sized Swamp Thing within the next couple of years. Whatever the next iteration of 6” DC figures is, we know it’s going to involve the new DC Universe, in which Swamp Thing has his own title. Granted, that may get cancelled like those before it, but with Scott Snyder, Yanick Paquette and Francesco Francavilla at the helm I’m thinking it’s got a pretty good shot at some longevity. Let’s hope so.
If you want a Swamp Thing of your own you can go to BBTS or check out eBay. I wouldn’t say the Un-Men are necessities, but if you want them you’re going to pay a premium.
Until next time, stay creepy
-Phantom
Posted by Phantom Troublemaker at 11:00:00 AM