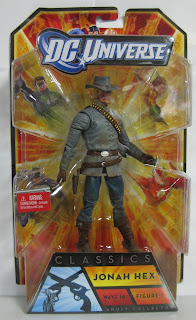 The only reason I bought this guy was so I could have Bane.
I like Jonah Hex and I’ve read plenty of comics featuring the guy and always enjoy his cameos in the DC Animated Universe. He just doesn’t really fit in with my shelves full of superheroes.
I’ve always thought the figure looked particularly outstanding and every review I’ve read has affirmed this (despite some trademark Mattel QC issues), but I just hadn’t planned to spend the fifteen bucks it would take to put a cowboy on my shelves that would stick out like a sore thumb. I suppose now I’m glad I did. Well, relatively glad. 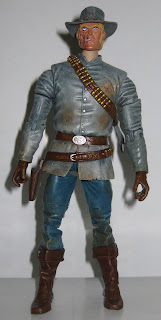 First Glance: Hex really is a great looking figure when you first see him. The sculpting jumps out and the colors are very gritty and real. Which is kind of the problem with fitting him into your DCUC collection with characters like Creeper and Killer Moth. 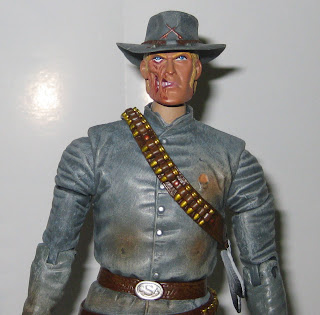 Sculpt: I believe Jonah Hex is 100% new sculpt, which probably wouldn’t have happened without the movie that came out around the time of the figure’s release.
The hat and head are nice and I think Mattel made the right decision in not making them separable. The tassel thing on the front of the hat adds so much character and the face is just amazing. It almost looks like that picture Thomas Jane released when he was campaigning for the role of Hex (I wonder if he’s relieved about not getting it).
The jacket/torso is great and absolutely full of detail. The seams, buttons and folds in the jacket are awesome; but you also have lots of damage in the form of tears and bullet holes. Just as much care went into sculpting Hex’s clothes as went into that scarred visage. He also has a bullet belt across his chest with a rifle holster on his back. They look great and again I think Mattel chose wisely by having them attached. The rig just wouldn’t look as good if it was loose enough to remove.
Hex has great-looking gloves with seams and wrist articulation. He can hold his guns very well (though the guns themselves… we’ll get to that).
The bottom of the jacket below the belt is a piece of softer plastic that does not interfere with the hip articulation. Hex’s pants don’t feature damage like the jacket does, but that’s okay – one would presume he changes pants more often than he does that jacket. The boots have a great shape to them and the ankle articulation does not detract from the look. The holster on my figure is solidly attached to the little button that holds it on, but I’ve heard of other people’s coming off or even being missing from the figure entirely. 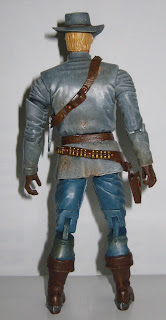 Design: The paint is just as good as the sculpting. Hex’s face has a tremendous amount of detail, with the scarring looking pleasingly nasty.
The jacket looks worn and the detailing is all where it should be. Same with the pants, boots and gloves.
The gun belts look awesome – almost like actual leather. All the buttons, bullets and buckles on this guy look fantastic and the applications are very tight and accurate. 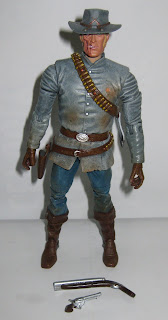 Accessories: Jonah Hex comes with a pistol and a rifle and they are both absolute pieces of shit. The sculpting and painting is just fine, but they are made of rubber and were both literally bent in half in the package. 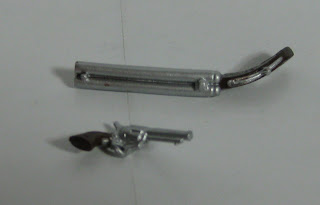 They would probably fit in their respective holsters very well if they were firm enough to push in. Stop it, Mattel. You should know better.
Hex also came with a piece of the Bane build-a-figure. 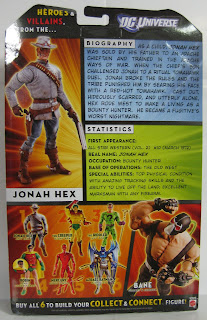 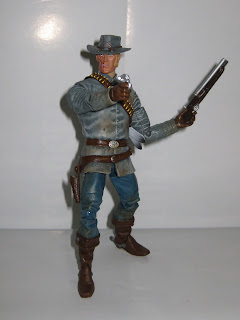 Overall: The figure is so good. I can’t imagine a better Jonah Hex figure coming out any time soon. Unless, of course, he came with guns that weren’t made out of butter.
4 out of 5
It’s such a damn shame when one stupid mistake mars an otherwise perfect figure. I wonder if the guns from the movie version would work with this one. I’ll find out once I find one on clearance. 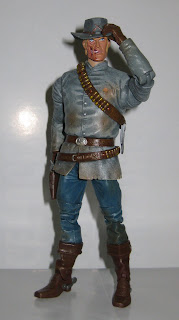