Welcome to Dragon*Con Week here on Needless Things!
Every year I do my best to build up our collective anticipation for the South’s greatest nerd festival. Check out my past entries here and then come on back throughout the week to see what kind of stuff I can come up with for this year.
It’s the Saturday before Dragon*Con as I sit here putting the finishing touches on my D*C articles for the week. I’ll be picking up my main costume no later than Wednesday, my money is stashed, my new beer bag came the other day, tonight I’m going home to pack my “stuff to be signed” suitcase. I downloaded the Dragon*Con app for Android last night and have already entered a bunch of stuff on the schedule. On the way home today I’ll stop and pick up my supplies – beer, Styrofoam cooler, PB&J ingredients, snacks. There are a couple of other things I’ll need – a new camera battery, a wrist strap for my cell phone. I tell you these things not because I think you’re all that interested in my shopping list but because maybe it’ll make you think of something extra you need or might want to do before the Con.

The wrist strap for my phone occurred to me because I’ve been taking a lot more pictures with my phone lately. The Droid X has a much better camera than my old Blackberry Storm; not to mention the fact that it can instantly and without hassle upload pictures to Facebook. So I’m probably going to want to take a lot of pictures with my phone this year, but will also be drinking a lot and really don’t want to drop the thing. The one time I didn’t utilize the wrist strap on my camera last year is the time I dropped it; so lesson learned.

Also, I found out Sylvester McCoy is now scheduled to be at Dragon*Con this year. He was the 7th Doctor and my second/third favorite depending on what time of day it is, so I put a last-minute order in to JRsToyworld.com for the only single-packed release of his figure. I absolutely love getting toys signed and this one will be a particular thrill; what with Doctor Who being one of my top three obsessions.
My suits are dry-cleaned, my shirts and ties are organized. All my purple socks are good to go. In short, I’ve prepared as much as I can for things. Dragon*Con is without a doubt the most fun I have every year and I want things to go as smoothly as possible. Preparation is the key.
Part of that preparation is frame of mind and writing about Dragon*Con is an excellent way to get in the con mood. I feel like I’ve gotten off pretty easy this year – I had my posts mostly outlined over a month ago and have been tweaking them since then. The only thing I’ll be writing cold is my actual schedule for posting on either Thursday or Friday. I have to wait for it to be published before I can get started. I suppose I could go off of what’s in the app, but it’ll be a lot easier to have a PDF to use. Of course, if they don’t have it published by Monday night I’ll have to use the app.
Last year I put up a list of the ten best dragons as part of my lead-in to Dragon*Con. I think I hit the best, but there are a lot of dragons left over that need to be discussed.
Today, we’re going to take a look at the next ten most awesome dragons. There might even be a couple here that overshadow some of last year’s entries but weren’t around yet or were too recent to make it into consideration.

10 – The Sucker Punch Dragon
Visually, this unnamed beast is one of the coolest dragons ever. It emerges from the depths of a tower to pursue the scantily-clad bitches who have just gleefully murdered its only offspring. This dragon is really the hero of the movie. Despite being all-CGI, it looks fantastic and has a real weight in everything that it does, from climbing to jumping to taking a bite out of an airplane while Vanessa Hudgens stands there looking slutty. The only reason this dragon isn’t higher on the list is it meets its demise when a little girl in a Donald Duck shirt stabs it in the head. Not cool.

9 – Draego-Man
I don’t know that it’s fair to put Draego-Man on the list. He’s new and we don’t know anything about him. But he is part of the 2012 Masters of the Universe Classics line, was designed by the Four Horsemen and does look pretty awesome. I still haven’t decided if I’m going to buy one or not because he doesn’t quite look like he fits into the line, despite being sixty percent farmed parts. I guess that’s a compliment to the ingenuity of the 4H. 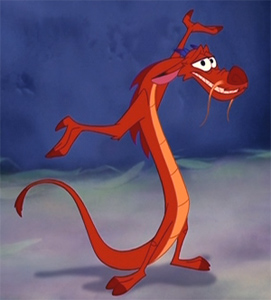 8 – Mushu
Okay, I admit – Mushu is kind of a sucky dragon. But he was voiced by Eddie Murphy back when Eddie Murphy was still funny. That’s got to count for something. Plus, he has a mustache.
7 – Don “The Dragon” Wilson
Not only is Donald Glen Wilson a champion master of White Dragon Kickboxing, he’s also starred or featured in such notable Hollywood offerings as Walker, Texas Ranger, Batman Forever and Roger Corman’s Bloodfist series. In eight different movies as seven different characters. His kickboxing record is 72-5-2 with 3 No Contest and that makes him a badass dragon. 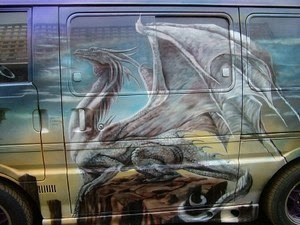 6 – Van Dragon
Since the seventies, thousands of awesome paintings have been airbrushed on the sides of thousands of vans. While wizards, barbarians and valkyries have had their fair share of attention; dragons are without a doubt the most rad subject matter. So rad, in fact, that as I wrote this paragraph I decided they need a whole article devoted to them. So tomorrow, come back for…
Van Dragons 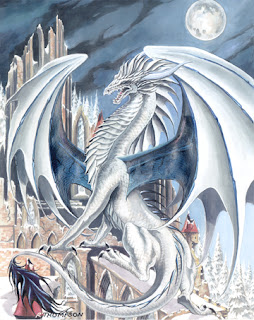 5 - Bahamut
From the Forgotten Realms wiki:
“Bahamut is depicted as a massive dragon (approx 180 feet (55m)) long with a tail the same length as his body) with platinum scales and blue eyes, the exact color of which is hard to specify and may depend on Bahamut's mood. When he wishes to interact with mortals, he appears as an old man, accompanied by seven gold great wyrms polymorphed into canaries. Some claim these wyrms are reincarnations of dead kings, renowned for their senses of justice.”
I believe that’s all the explanation I need. 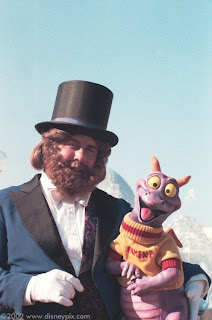 4 - Figment
This Disney dragon may be more of a proponent of the arts than of devouring maidens and razing villages, but he’s still awesome. Epcot’s World of Imagination was my favorite part of the park when I was younger and to this day I still enjoy seeing the little, purple dragon waiting to greet visitors. I believe they removed him from the ride at one point and I was pretty pissed about it. I’m pretty sure he’s back now, though he may not actually be a part of the attraction.

3 – Toothless
The Night Fury dragon from Dreamworks’ How To Train Your Dragon is awesome. Seriously – when you’re the coolest dragon in an awesome movie about cool dragons you’ve really got something going on. Toothless is even cooler than the big, giant dragon at the end and that’s saying something.

2 – Hothead
I have no idea what this guy’s backstory is, I just know his figure was awesome. Much like the above entry, Hothead is twice as impressive owing to the fact that he stands out among the rest of the incredible Teenage Mutant Ninja Turtles toy line. Even though I was pretty much done with that era of Turtles by the time this dragon man was released, I always lusted after that particular figure. 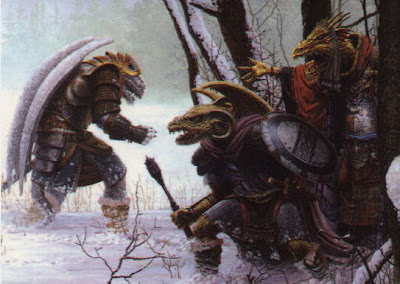 1 - Draconians
No, not the race of lizard-men who are secretly in charge of the world. I’m talking about the magically-created bastard dragon-men who inhabit the world of Krynn. I was way into Margaret Weis and Tracy Hickman’s Dragonlance books when I was in high school. Draconians are created from the magical corruption of a dragon’s egg and are generally servants of the evil goddess Takhisis. They’re tough to kill and have magical abilities and each species dies in a different way, from dissolving into pools of acid to turning to stone to my personal favorite; the bronze Draconians. Their scales and flesh dissolve, leaving only the bones behind which then explode. Fucking awesome.
Until next time, stay creepy
-Phantom
Posted by Phantom Troublemaker at 11:00:00 AM