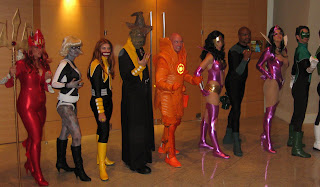 Welcome to the post where I speculate about who will wear what at the Southeast’s biggest and best nerd festival.
First, though, I have to express my irritation with something: somebody stole Nerdi-Gras from us. I’ve often heard that term used to describe Dragon*Con. I have never utilized it myself because I find it to be a little too cutesy, but given the costuming and debauchery that goes on I think it’s an appropriate bastardization of a widely known concept.
Somebody on G4 used the term to describe San Diego Comic Con during their coverage of the event and I think that’s fucking bullshit. As a matter of fact, the person that used the term on the air was at Dragon*Con last year and commented on how much wilder our East Coast party was than their Hollywood suck-up festival. And from what I understand, it’s true. SDCC may be great for seeing trailers 6 hours before the rest of the world and not paying $100 for that exclusive action figure, but their post-7 PM activities don’t have shit on how we get down.
You’re fucking-A right we’re Comic Con with titties, Chris Gore.
Okay, I’m done. Now onto the costume thing.
I did oneof these last year and I was sort of successful in predicting some costume trends. Like I said then, I’m no Tim Gunn of nerd fashion, but I think I can make some fair guesses about who the big characters will be and what sort of folks will be representing them. The tough part is that there were actually a lot of genre properties this year and I’m honestly not sure how to gauge which ones have the most appeal to the costumers.

Regardless, I have a lot of respect for those willing to go to the great lengths required to make good costumes. Even if it’s some stupid anime shit or the billionth person in goggles and a velvet frock, good for them for getting into it. Now let’s see just exactly what I think “it” will be.

Sucker Punch
This movie pretty much tanked. I think that’s mostly because it pretty much sucked. But it still had some striking visuals and some outstanding Hot Chick costumes. I certainly hope some limber young ladies out there liked Mr. Snyder’s magnum opus enough to emulate the styles. And while I was thoroughly put off by the theatrical version, I did end up buying the Director’s Cut on Blu-Ray while it was a measly fifteen bucks at Walmart (how many times do I have to tell you what a sucker I am?). I was able to enjoy the movie for what it was and I will say that the musical scene improved it a lot more than is reasonable. If Snyder had thrown in two more musical numbers and left out all the artificially angsty stuff I think Sucker Punch could have been a real winner. Maybe enough other folks will feel this way to see some costumes this year.

(Update: This is happening) 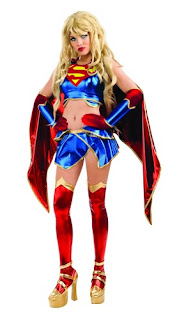 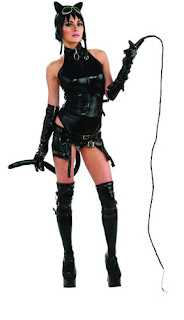 Ame-Comi Costumes
This concept almost has too much going on for me to handle. While I have a very low tolerance for anime, I have liked most of the anime-inspired statuettes that these costumes are based on. I’m also not a fan of straight-up store bought costumes. Usually this is not so much because I think they’re lazy as the fact that they’re rarely accurate. If you go into Party City and buy a Jango Fett costume to wear you’re going to end up looking like an idiot. But these Ame-Comi costumes are slightly higher dollar and look exactly like the toy counterparts. And look hot on the right ladies. Maybe ladies isn’t the right word. 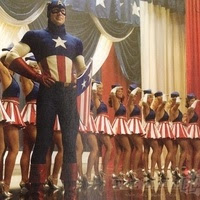 The Captainettes
Much like Iron Man a couple of years ago, Captain America had some back-up dancers in his movie. While infinitely more surprising it was no less appropriate. I would imagine that the same girls that were Ironettes then might decide to be Captainettes now. I haven’t seen such a costume at retail, but I would think they’d be easy enough to put together.
(This one has – much to my surprise –been proven since I first wrote this. There’s even a meet-up for ladies in the Captainette costume. I am a fucking genius.)

Bane
(image ganked from our lovely friends over at Veidt.com)
Batmans are a given at Dragon*Con. I’ve even seen a Bane or two over the years. But now that pictures and video have leaked of Tom Hardy’s Bane in the new Nolan flick I’d put money down that we’re going to see at least a couple of the new movie version of this guy. Aside from the mask it should be a pretty easy look to achieve. Well, if you’re already all super-muscley. Bane is definitely one of those “know your limitations” costumes.

X-Men: First Class
I don’t know how likely it is that we’ll see the yellow and blue uniforms, but it should be easy enough for some folks to find some vintage clothes and attain the right look to be the movie version of the team. I just feel bad for the guy that has to be Henry McCoy. Unless he takes the cheap way out and does a human McCoy. And then I will taunt him for being lazy. From underneath my pullover mask.

DCnU
It’s going to happen. I know cosplayers like a challenge and I think the more skilled of them have had plenty of time since the original reveals to make costumes of the new designs for Batman, Superman and Wonder Woman; maybe even some of the others. I don’t count that new Harley Quinn look because half the girls at Dragon*Con dress like that anyway. That’s not even a costume. I dare somebody to wear that shitty Deathstroke costume. And get Cully Hamner to sign it.
Side Note: I’ve decided I do like the new Red Robin look except for the stupid wings. At first I thought I hated the whole thing, but it was really just those stupid, stupid wings that were bothering me. And I also wasn’t thinking about how dumb his current costume looks. I’ve disliked that thing since I saw it in Kingdom Come – Alex Ross’ corporate-approved fan-fic. 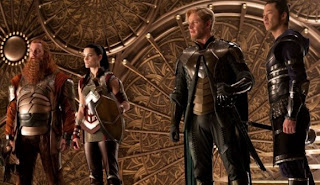 Thor
I really hope we’re going to see a wide array of Asgardians this year. Thor generated huge amounts of goodwill from pretty much everybody, so I’ll be really surprised if we don’t at least see the Warriors Three.
Side Note: If I’d thought of it sooner I would totally go as the Thor from the SyFy version and just hang around the Marvel ones all the time with my big machine gun. I bet people would think I was Nomad. 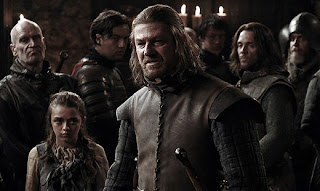 Game of Thrones
I still haven’t seen this new phenomena from HBO. I’m not sure how you’d tell people in these costumes from people in regular Medieval-themed regalia, but I bet the fans will know. Doesn’t matter to me – I’m going to ask every knight I see if they’re from Your Highness.
(This, too has already been proven – the meet-up is scheduled)

Conan
There are always some Conans running around, but I’m hoping we’ll get to see some of the other characters from the new movie. It looks like a lot of effort went into character designs on this one. Everybody looks very distinctive and comic-booky so I think there are a lot of cool possibilities. The only thing going against this one is the very small amount of time between its release and the Con. 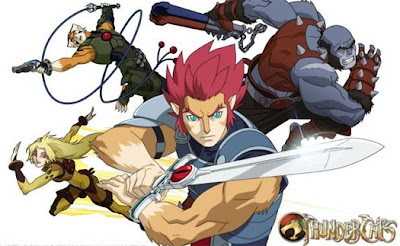 New Thundercats
While I’m sure we’ll see the Thunderdrunks again: 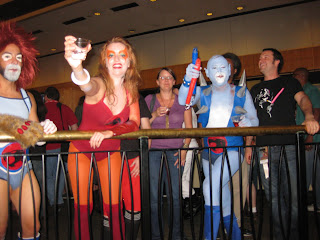 I don’t know if we’ll get anybody dressed as the contemporary versions form the surprisingly excellent new show. I think the costumers have had plenty of lead time to design stuff, but I don’t know if anybody would without seeing the source media. What if the new show had sucked and you’re stuck being a version of Cheetara that everybody hates? Thankfully that’s not the case. Seriously – the new show is awesome.