Toy Review – Masters of the Universe Classics: Clawful By Mattel 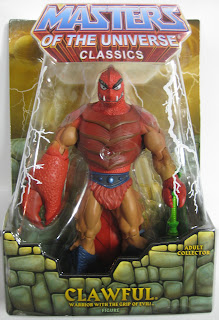 Well, the shipping on Matty’s subscription items seems to be a whole lot better. I got Clawful two business days after he went on sale. That’s better than last time.
Matty announced the details of next year’s subscription at Comic-Con over the weekend and they range from pretty neat to mind-blowingly awesome to almost literally unbelievable. I’ll put it this way – Mattel put out some ridiculous false information to try and cover up a leak and some of the actual reveals were more wonderfully insane than the silly stuff they made up.
But I’ll discuss all that – as well as why I’m skipping the all-new DCUC sub service – in another post very soon. Today we’re here to talk about the latest Masters of the Universe subscription figure – Clawful.
I was fairly ambivalent on this one. He seemed like he was going to be weird enough to keep, but not cool enough to really treasure like some of the other figures (Trap-Jaw, Scareglow). He has big, stupid eyebrows, but it would be hypocritical of me to hold that against him. I was definitely excited about his giant claw, though. 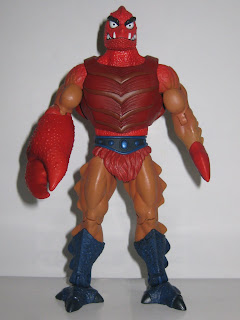 First Glance: Parts of Clawful look much better and more detailed than I imagined they would be. Other parts of him look fucking stupid. 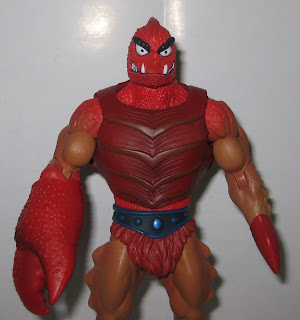 Sculpt: Let’s start with the fucking stupid. It’s his head, man. It’s so bad. I get that it’s modeled after the original version, but it really looks too stupid to fit in with the rest of the MOTUC figures. Those eyebrows and the big, white eyes are just too much. He looks like a red Koopa. It’s really awful.
Unfortunately for me, the quality of the head is excellent. And that’s what I try to rate a little bit more than my preferences. I can’t help but let a little bit of personal taste into these reviews, but I try to recognize quality even when it’s masked by crap. Crap like Clawful’s stupid head. Which is well done despite being dumb. All the little bumps all over give a lot of personality and texture and regardless of how dumb they look the eyes and eyebrows are very well done. The mouth is more acceptable, as I can see it looking okay underneath a less absurd visage. I do wish they’d used a darker red for it, though.
Clawful’s body sports a lot of new stuff. He has a standard chest with bumpy shoulders and upper arms. His left arm ends in a claw with a swivel joint at the wrist. His right arm turns into the larger claw just below the elbow. Unfortunately, the small piece between the claw and the elbow is made of a very soft plastic that will tear if the paint used on it happens to fuse the joint between it and the claw.
Both claws look good. The smaller one is the Buzz-Off claw and the larger one is hinged to open slightly. It has nice sculpting and is made of a light plastic to preserve the figure’s ability to stand. While I might have liked a sturdier material, a heavier claw would have screwed up Clawful’s balance.
Clawful has standard MOTUC monster legs and they look great, especially when he's doing his species' mating dance: 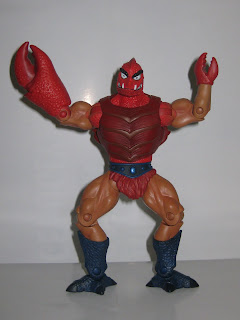 All of my Clawful’s joints are tight and move well. Except for one – we’ll get to that next. 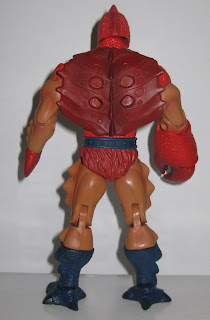 Design: I’m really, really impressed by the paint on this figure. It’s not that it’s super-detailed or anything, it’s just that what’s there is used so well (with one massive exception). The red that comes out from underneath his breastplate is a great touch that makes the figure look so much more organic. His feet are a great shade of blue and the paint on the breastplate has some great shading.
The problem is that Mattel used red paint on the right arm where the large claw meets the elbow. The paint froze the joint in place so that the claw can’t rotate and the material used on that part is so weak it feels like it’s going to tear with any amount of pressure. I tried the freezing trick and the hot water trick and the thing just will not budge. It’s almost like it wasn’t meant to rotate, but that doesn’t make any sense; also the claw on mine is upside down compared to all of the production photos.
The head is a bit simplistic but well done. The blacks and whites stay where they are supposed to. 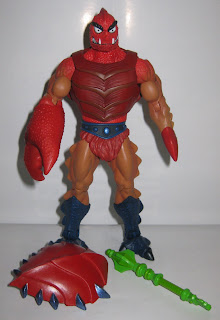 Accessories: Clawful comes packed with a shield and a green mace. You could also count the breastplate as an accessory because it does come off – I just didn’t bother with removing mine.
The mace is very cool. It’s a classic Masters of the Universe weapon and the paint looks great. The green contrasts Clawful nicely and there are metallic highlights that really make it pop.
The shield is creepy. If I ever came across it just laying on the floor I’d probably shriek like a little girl and hop up on the nearest chair. The design and paint are both well-executed, though. 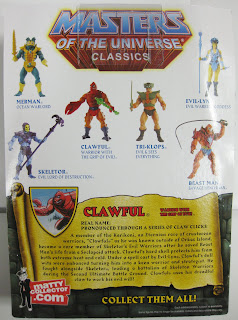 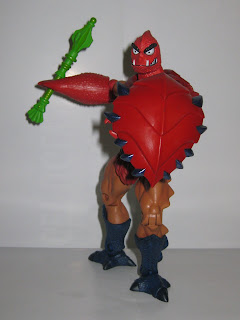 Overall: I don’t care for the head at all, but it is well-executed. They intended for it to look stupid. The claw is definitely a problem, though.
3 out of 5
Clawful doesn’t excite me. If his claw turned and his head looked cooler I’d be thrilled with him. As things stand he’s just average. The claw is an issue, but not as big an issue as if his legs didn’t work or something. It’s in an acceptable position and isn’t actually hindering the figure in any way.
If you want one, BigBadToyStore can help you out and there’s always eBay. These things seem to be going for reasonable prices lately until you add in the jacked-up shipping a lot of folks are putting on there.
Until next time, stay creepy
-Phantom
Posted by Phantom Troublemaker at 11:00:00 AM