Toy Review – Masters of the Universe Classics: The Faceless One By Mattel 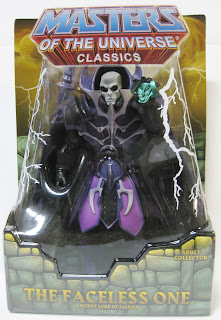 I remember the Faceless One from the 2002 He-Man cartoon, but I’m not sure we got all the backstory his filecard provides:
(From MattyCollector.com)
The Faceless One™ Bio
Real Name: Nikolas Powers™
As the ruler of Zalesia™, Nikolas Powers™ was entrusted by King Grayskull™ to guard the city’s great magical objects - the Havoc Staff and the mystical Ram Stone. Powers was a core member of Grayskull’s Council Of Elders, great mages from across Eternia® who had the wisdom to tap into the planet’s hidden magical secrets. But by marrying and having a daughter, he broke the Elder’s treaty with King Hssss™ to not produce any heirs. Powers was stripped of his humanity, condemned to never leave Zalesia™ and forced to watch his beloved city destroyed by Serpos. Now called “The Faceless One™,” he asked the wizard-warrior He-Ro™ to use the power of Central Tower to send his daughter Evelyn into the future. There, with his immortality, he hoped to raise her away from the terror of the Great Wars.
So The Faceless One is actually a pretty decent guy. I would never have guessed that based solely on his appearance. You might want to bust out the ol’ nugget about judging a book by its cover, but let’s face it – on Eternia you’re usually pretty safe assuming the guy with two giant fangs instead of a head means to do you harm.
I wasn’t overly enthused about receiving Evil-Lyn’s dad, but I also didn’t hate him on sight like some of the other chumps I’ve ended up with *cough*Sy-Klone*cough* thanks to my subscription. I mean, the guy’s purple. How can I not like a guy wearing that much purple at least a little bit? So let’s see just how little I like him. 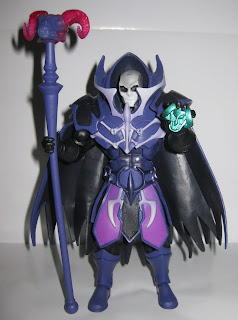 First Glance: The Faceless One looks majestic, I’ll give him that. If he had a human head, the citizens of Eternia would definitely depose that stupid-looking Randor and make Nik here their new king. This guy really fills up the packaging. Also, he has a creepy alien head that I absolutely hate. I have no tolerance for Greys – there is nothing in reality or fiction that scares me more. 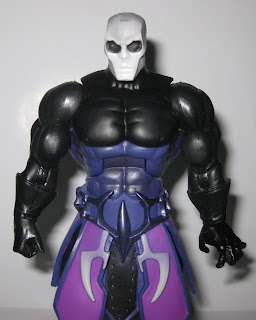 Sculpt: Under all of his fancy accouterments, Faceless here has the basic MOTUC body. It’s actually quite dull once you strip the gigantic Mr. Sinister cloak and the kilt thing away. Just a mostly black body with standard gloves and boots and all the regular points of articulation. Which is fine. As far as I can remember all of the character’s detail was in the robes and stuff anyway.
The head is a hideous nightmare of alien-ness. It is by far the worst thing to come out of the Masters of the Universe Classics line and if I had a tiny, little paper bag to put over it I would. As it is I think I’m going to have to face him towards the wall. There’s nothing wrong with the head (aside from its gruesome depiction of soulless evil incarnate); it’s sculpted very well and goes along with the look of the figure. I just hate it with a passion. 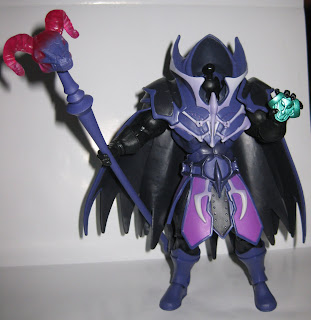 There. That’s better.
The cloak flies off if you so much as fart in the figure’s direction, so I’m considering that an accessory. The kilt piece looks great and is intricately sculpted. There’s all kinds of detail you really don’t even notice until you remove the cloak piece. It interferes with the articulation a bit, but not nearly as much as you might think just by glancing at the figure. The issue is really more in the fact that the joints are a bit too loose to maintain a pose when put up against the kilt’s resistance. But what does this guy really need to do, anyway? I think he mostly just floated in one spot on the show.
The Faceless One also has those tiny human hands that all the non-monster Masters males have. They serve to make his alien head even more unnerving. Actually, his right hand is the same, the left one is sculpted to hold the Ram’s Stone. 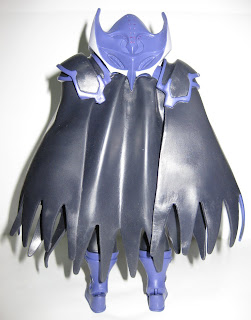 Design: I hate the head, but I greatly admire the color used on it. It looks ghastly. I do kind of wish it glowed in the dark, but at the same time I’m glad it doesn’t. Then I would know when he was looking at me even when the lights were off.
The rest of Mr. Powers’ paint looks terrific. Well, the cape and kilt anyway. The designs are great and well-defined and the color combinations look very good. The only thing that confuses me is how distinctly villainous this guy looks when compared against his actions. The more I think about The Faceless One, the more intrigued I am to get his full story. I find myself more and more fascinated by father-oriented stories lately for obvious reasons. 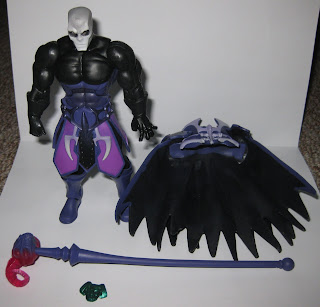 Accessories: The Faceless One includes the Zalesian Havoc Staff and the Ram Stone, as well as that splendid cloak I keep mentioning.
The cloak is huge and grand and well-detailed. It really makes the figure. It actually consists of three separate but attached pieces so that the shoulders can move up to accommodate the figure’s movement.
The staff is the same as Skeletor’s, mostly because the staff is the same as Skeletor’s. The difference is that this one is molded from a translucent plastic and has parts painted purple. As you all know, I am a sucker for translucent plastic so I love this particular Havoc Staff.
The Ram Stone is a metallic green and shocks the crap out of me by fitting perfectly and securely into Nik’s left hand. 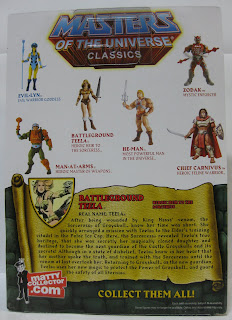 Packaging: The standard Masters of the Universe Classics packaging. It looks nice, makes the figures look even bigger than they are. You also get a bio on the back that is sort of a composite of each character’s history. This is one of those guys that really fills up the package, and I like that. 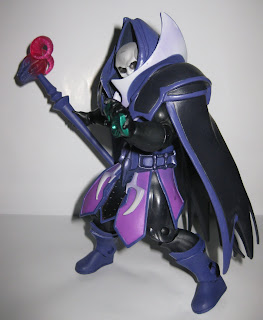 Overall: This is a great figure as long as you leave his cloak on. Now that I know the whole story, I like this figure even more than I otherwise would. He’s about as good as he could possibly be. Despite his menacing visage.
5 out of 5
If I were to dock this figure points based on how much it terrifies me I would have to have given it a -666 out of 5.
I can’t honestly say this one is an essential addition to your MOTUC collection. You’d probably never even notice if Matty didn’t ship it to you. But I like it and am really sold on the actual character now. Plus, it’s an all-around good figure. In purple.
Until next time, stay creepy
-Phantom
Posted by Phantom Troublemaker at 3:23:00 PM