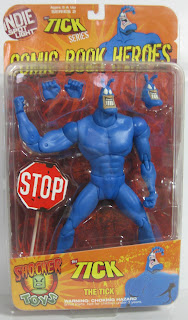 Lil’ Troublemaker Series Part 3!
I got a huge box of awesome (mostly) from BigBadToyStore the other day. There was a lot to go through and take pictures of and Lil’ Troublemaker wanted to help, so I let him pick out what order we took the pictures in and opened the figures. That’s the order that you’re reading all of these in now.


Let’s take a break from DCUC and check out another corner of the superhero toy market: Toys of characters from indie comics!
Did you read myreview of Shocker Toys’ Scud: The Disposable Assassin figure? No? Well, Shocker Toys did. They were pretty enthused about it:
Shocker Toys Despite the dialog we did get a 5 out of 5 = ) June 23 at 5:44pm
which is cool because I kind of made a lot of fun of them. Hey, you can’t advertise a main-in figure and not deliver without me giving you some “dialogue”. Especially when you have to buy an entire series plus variants to get the figure.
But regardless of the legitimacy of mail-aways or the timeliness of products, Shocker made a great toy in Scud. Does their brand-spanking-new Tick figure live up to that standard? 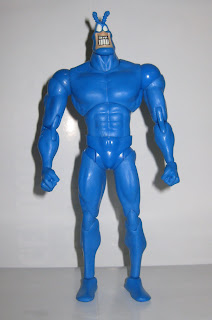 First Glance: I love how huge the Tick is. I have to mention here that Shocker Toys has once again under-delivered (sorry, guys). This Tick is a preview figure and was originally solicited to include not only the pictured stop sign, but also a purse, a necktie, a Viewmaster (or reasonable facsimile) and a spoon. I could do without the rest of the stuff, but the failure to include the spoon is downright criminal. To be fair, I’m not sure the original solicitation included the extra hands and head. I could do without the fists if it meant we got a spoon. Heck, I’d give up the fists and the stop sign for a spoon and I’m pretty sure the tooling would cost more for that sign. Oh, well. Anybody know someone that makes tiny spoons? 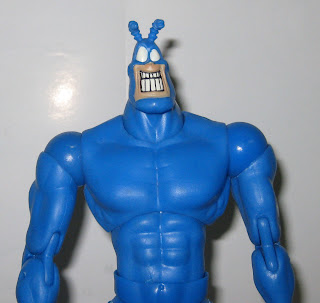 Sculpt: Once again Shocker Toys has delivered a fantastic sculpt. They appear to have some of the most innovative toy designers out there. At the very least they must be big fans of Japanese toys. The Tick looks exactly like The Tick, but is still chock full of articulation that does not aesthetically harm the figure in any way.
Tick has an amazing range of movement. The top of the neck is a ball-jointed connection point for the swappable heads. Rather than leave it at that like some other toy makers *cough*Mattel*cough* shocker sculpted Tick’s ridiculously muscular neck as a separate piece on top of a rocker joint. The result is a Tick that can look all over the place for crime.
The shoulders are combination ball/rocker joints and allow for crushing and/or hugs. The elbows are double-jointed and the wrists are ball-jointed connection points for the swappable hands. There isn’t a huge range of motion on the wrist joints, but what’s there is plenty. How many different ways do you really need to aim your hands to punch crime in the face?
Tick has two torso rocker joints (!) – one under the chest and one at the waist. They work beautifully and again do not detract from the look of the figure. The waist rocker is a particularly good idea. I wish other companies would make more use of it.
The hips are the same brilliant ball/rocker joint as the shoulders, but the top of the thigh is sculpted in such a way that it doesn’t look weird like it should. I can’t quite explain it, but you can see in the pictures. The knees are double-jointed and the ankles are the same as the wrists. It’s a shame Tick didn’t come with swappable feet. Strike that – that would be ridiculous. Those ball joints do affect the posability somewhat, though. I’m not sure what the answer is for the perfect ankle joint. Mattel’s WWE figures have the best range of foot motion but the ankle joints are downright fugly. The DCUC stuff isn’t bad as long as the morons don’t paint them. Hasbro’s increasingly rare (but maybe not for much longer) 6” scale stuff moves well but varies greatly in appearance. Overall I suppose Mattel’s Masters of the Universe Classics are best, but you’re going to pay for it. All in all, tick’s ankles are plenty good for leaping from rooftop to rooftop.
The swappable parts all swap very easily thanks to the parts themselves being made of a softer plastic and the holes being made of a tougher plastic. 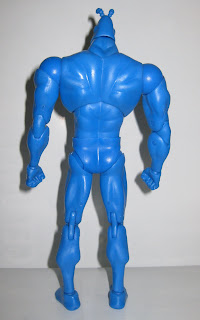 Design: Well… he’s blue. Despite several different types of plastic being used throughout the figure, he is uniform enough to satisfy me. Anybody who has a problem with the extremely minor variations in shade is probably an asshole. Or a criminal. The paint on the faces is bright and distinctive. My angry face is just barely a tiny bit sloppy, but not enough to bother me. I’m being nitpicky and I apologize. 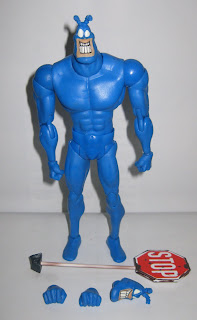 Accessories: Tick comes with a stop sign, an extra set of open fists and an extra angry head. You have to be very careful taking the stop sign apart for Tick to hold it. It’s a brittle (but not un-sturdy) plastic that could break if you’re not cautious. You have to sort of turn and wiggle the little chunk of stuff on the end to remove it. 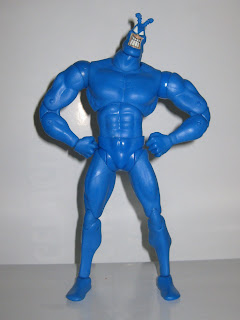 What the Tick does not include, however, is a spoon. I would like to challenge the product manager that made that call to a duel. Of spoons. 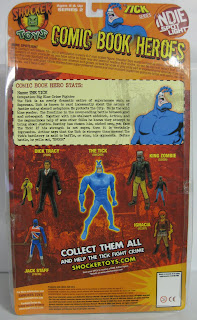 Packaging: Guys, I’m seriously not trying to gush about Shocker Toys. Even knowing they might well read this one like they did Scud, I’d call them out if it were needed. Like, say, for NOT INCLUDING A SPOON WITH THE TICK. But I love them for their packaging. It’s a plastic tray with a backboard that slides in. Meaning you can open this figure, have it fight all the crime in your city and then pack it back up just as you bought it as many times as you want to. Which means I would buy that product manager a delicious Britt’s Donut after I won our spoon duel. 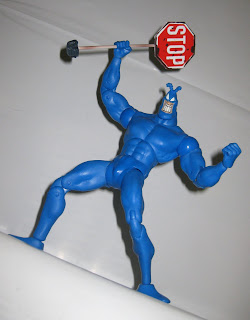 Overall: Go buy a Tick. Now.
5 out of 5
Hey, I’m rating this based on the quality of the figure itself, not on the stuff that might’ve come with it in some alternate reality where Shocker Toys totally does everything they claim they’re going to do. The Tick is a great figure, and one of those I think every toy fan should own whether they know the character or not. You can preorder the standard Tick now from BigBadToyStore or order this one direct from ShockerToys’ own website where you can also see all of the other figures they have made or are making.
This makes two huge wins for Shocker, which means now I want more of their toys. I plan to track down Maxx and Kabuki from the first series and may well buy everybody from the forthcoming second series if I can get confirmation that the Arthur mail-away figure is actually going to happen (Shocker people – are you reading this?). I’ll keep you guys updated. In the meantime, if you see any of the Indie Spotlight figures you should pick at least one up. They’re fun and that’s about the highest compliment I can pay an action figure.
And yes, I did put a little extra into his review knowing that it might get read by the folks at Shocker, but it is still – as with all my stuff – 100% bullshit free. 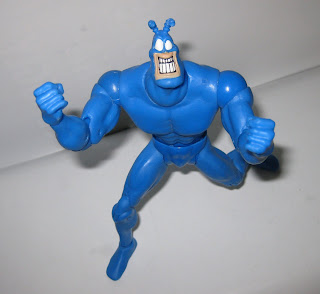