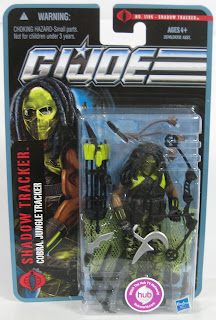 Shadow Tracker is one of the wackier figures Hasbro has offered in the GI Joe line since shifting from the 25th Anniversary theme. That’s saying something when you’re talking about a toy line that features guys with metal heads, mech suits and my personal favorite the Trubble Bubble (now unfortunately called the “Flight Pod”).
As you know if you’ve been following Needless Things at all, I love a certain amount of wacky. Adding to this figure’s appeal is the fact that he was released in the same quarter as the new Spirit figure, which looks exactly like Billy from Predator. The reason that’s so funny is that Shadow Tracker looks an awful lot like the Predator from Predator. We can only hope they’ll do a new Gung Ho that looks like Jesse Ventura, a Carl Weathers Roadblock and a Duke that looks like Dolph Lundgren. No, not Arnie. I don’t need my First Sergeant diddling the housekeeper. 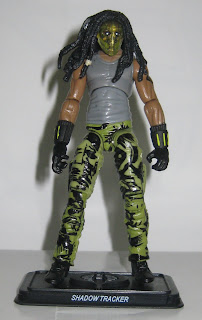 First Glance: Aside from his crazy mask and dreds, this guy looks more like a Bass Pro Shop enthusiast than part of a ruthless terrorist organization determined to rule the world. Then again, a real-world Cobra would likely be pretty well stocked with Bass Pro militia types. I like the look of this guy and I’m very curious as to what’s under that mask. 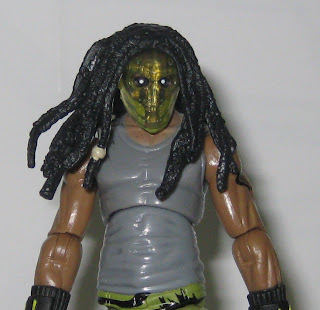 Sculpt: NEW ARTICULATION! Shadow Tracker has new (for GI Joe) wrist articulation so that he can line up his bow and an arrow properly. The rest of him is fairly standard by now, with shoulders, elbows, double-jointed knees, ankles, waist and hips. The neck is ball-jointed, but mostly restricted to swiveling thanks to the figure’s hair.
The hair itself is impressive. It consists of multiple layers of a very soft plastic and looks great. The mask, sadly, does not come off. I’ll leave it to other internet personalities to pry that thing off and ruin their figure to find a completely unimpressive face that was never meant to be seen anyway.
I like the clothing choices for the figure. Obviously fatigue trousers are always going to work for a Joe (or Cobra as the case is), but I like the other choices made as well. The tank top, gauntlets and track shoes work to make this guy seem like more of a fringe operative. 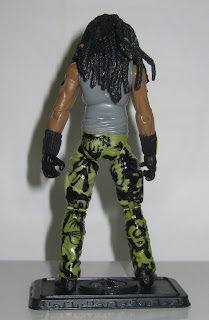 Design: The camo on the pants looks cool and distinctive. I might have liked a little more detail in the shoes, but they look fine. There are a few bits of color in the hair to represent beads or whatever type of stuff crazy hunters with dreadlocks might tie into their hair. Overall, Shadow Tracker is very different from the average Joe or Cobra.
I’m not entirely sure how I feel about the neon mask. It makes him look a bit more like a figure from The C.O.R.P.S. It also seems a bit impractical for somebody whose name suggests they might try to hang out unobserved in, say, the shadows. A neon yellow mask might draw unwanted attention. But it does look really cool. It almost looks like there is a skull under that translucent mask and I’m not sure a more reasonable color like gray or brown would look as striking. 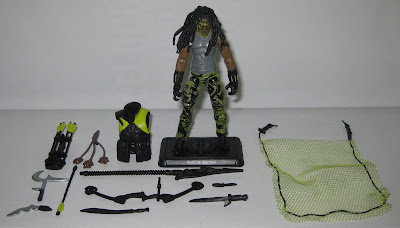 Accessories: Shadow Tracker is packed with even more accessories than other recent Joe releases. He comes with: 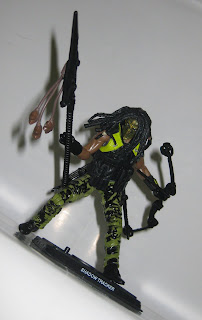 That is a lot of stuff. I like that this guy doesn’t come with any guns. There are three different connection points on the figure for the pieces that have them and one on the spear. Shadow Tracker can hold and interact with all of these accessories just fine. 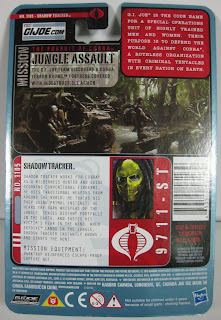 Packaging: Simple Joe packaging. For this scale of figure, nothing will ever beat the classic plastic blister glued to cardboard. They’ve brought the filecards back, but I really wish they still had that tab at the top left. 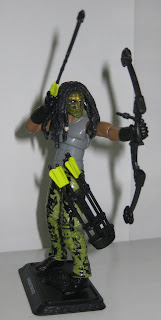 Overall: I had actually given up on finding this one. It was just sitting on the shelf by itself at a Walmart in North Carolina. If you can find one in a store or online I’d say he’s worth at least ten bucks to pick up. Luckily, he was only seven at Walmart.
5 out of 5 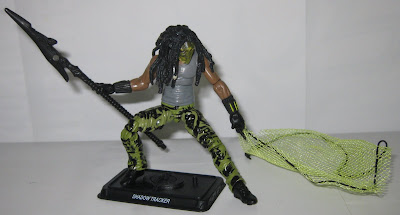 This is just another outstanding piece from Hasbro. Mattel is producing minimally articulated figures with very few accessories for the same price as these Joes. As you might have seen last week, I like Mattel’s smaller Lantern toys; but if you’re for some reason trying to decide between Lanterns and Joes I’d have to recommend you go with the Joes. Especially this one. 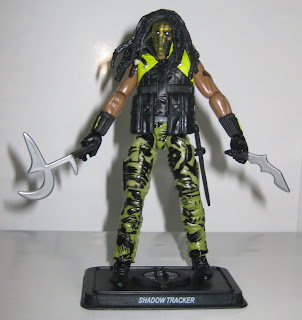