Lil’ Troublemaker Series Part 7!
I got a huge box of awesome (mostly) from BigBadToyStore the other day. There was a lot to go through and take pictures of and Lil’ Troublemaker wanted to help, so I let him pick out what order we took the pictures in and opened the figures. That’s the order that you’re reading all of these in now. 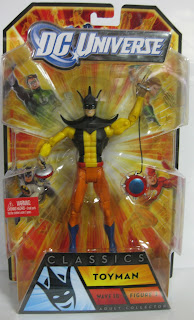 This is the figure I was least excited about from Series 18. I don’t know why, but I just don’t like Toyman.
It seems almost counter-intuitive that I would dislike a character with an obsession similar to my own, but I’ve never liked any iteration of Toyman – not the original Golden Age version, not the kid from Superman/Batman and not the Jack Nimball version that this figure represents (or so I thought - the card names him as Winslow Schott, which I'm not sure is accurate). The one from Superman: The Animated Series and Justice League probably comes closest to being cool, but only because he’s so damned creepy. And I’m not even going to bring up the guy from Smallville.
That’s not to say I didn’t want this figure. I do like the jester look and Toyman was an integral part of the Legion of Doom on Super Friends. 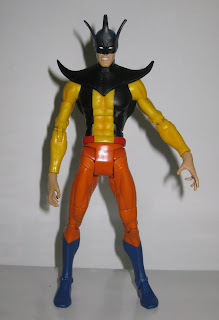 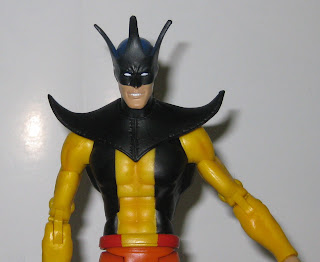 Sculpt: Toyman looks mostly fantastic. From his pointy hat to his boots, this is an exact representation of the look I most identify with this character.
The head is very nicely done. The hat looks great and the face is the equal of any DC Direct figure. The shoulder gear is accurate and has some very nice stitching detail.
Toyman’s body is appropriately skinny. He has standard DCUC articulation for the most part with double-jointed elbows and regular knees, despite production photos showing double-jointed ones. Toyman has the new ball joint wrists as well. I believe those hands are even new. All in all, this figure is great once you get a close up look at him. 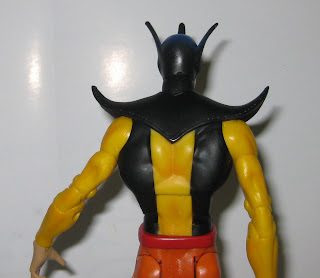 Except for his stupid fucking left shoulder. I've been noticing this more and more – the sculptors making uneven shoulders so that you can't put one of the arms all the way down and the figure looks like it's been stung in the armpit by a bee. 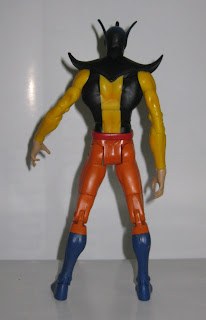 Design: Toyman had orange pants and I hate that, but he does look correct. Mattel has done a good job with a very basic design, which is pretty much the story of Series 18 as a whole. The paint apps are tight and none of the figure’s points of articulation are affected. The detail on the face is particularly nice. 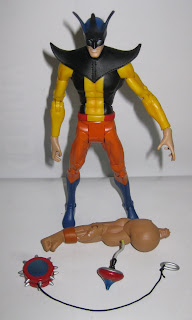 Accessories: Compared to most DCUC releases Toyman comes with a veritable cornucopia of accessories. He’s packed with a bomb top and a spiked yo-yo, both excellent choices in that they’re deadly toys that directly interact with the figure as opposed to just a doll or something. The detail on both toys is very nice and I’m very impressed that there is an actual string on the yo-yo. I will say, however, that I can’t help but feel that if Hasbro had made these items the yo-yo would have spring-loaded spikes or blades and the bomb would explode.
Each Series 18 figure also comes with a piece of Apache Chief. 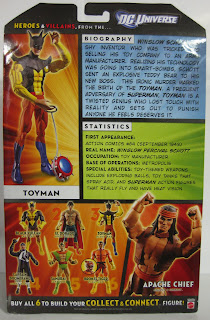 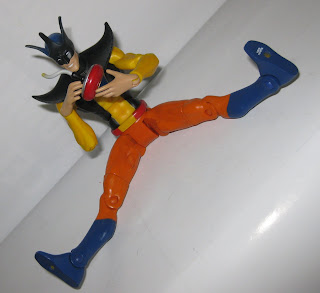 Overall: This figure almost makes me like Toyman except for the hideous orange pants.
4 out of 5
Mattel did an excellent job on this one aside from that jacked-up shoulder. I really do wish they had given Toyman double-jointed knees, though. I have a feeling if I want a Ragdoll I’m going to have to make one and this figure would have been a good start.
Until next time, stay creepy
-Phantom
Posted by Phantom Troublemaker at 11:00:00 AM