Lil’ Troublemaker Series Part 4!
I got a huge box of awesome (mostly) from BigBadToyStore the other day. There was a lot to go through and take pictures of and Lil’ Troublemaker wanted to help, so I let him pick out what order we took the pictures in and opened the figures. That’s the order that you’re reading all of these in now. 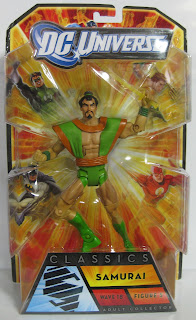 Samurai, Black Vulcan and Apache Chief were the biggest reasons I was excited about Series 18 of DC Universe Classics. A lot of people dismiss these guys because they are not from the comics, but fuck those people. I was into television long before I ever picked up a comic book. My gateways into the world of DC Comics were Batman ’66, Super Friends and the Lynda Carter Wonder Woman. Anybody who doesn’t see the value of those iterations or dismisses them as less important than the comics is a fool.
There’s also the fact that the whole reason Samurai, Black Vulcan, Apache Chief and El Dorado (apparently – we’ll get to him later) were introduced into the show was to promote cultural diversity. Yeah, it was a heavy-handed diversity full of stereotypes; but younger me didn’t care about that stuff. Younger me just saw a black guy, a Native American and a Japanese guy (like I said, we’ll get to El Dorado later) working side by side and on equal terms with Superman, Batman and Wonder Woman.

Just as an example of how impactful that equality was, it was stranger to me that Robin was allowed to be part of the Justice League than any of those guys. And still is. To me, that’s some powerful messaging and an important part of not only pop culture but American history. So if somebody wants to trivialize these important characters or bitch about them getting slots in the line they can just kiss my big, purple ass. 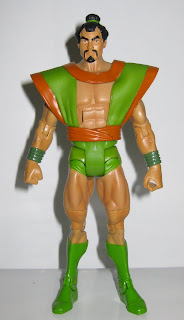 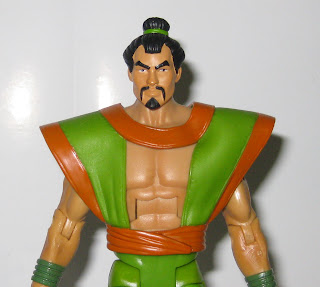 Sculpt: Samurai’s body is pretty basic. He has the standard DCUC articulation and regular male body. There are bracers on his forearms and he has booted feet, which I thought was a nice touch.
His head looks great. It’s very distinctive and has his signature hairstyle. Granted, there wasn’t a whole lot of room for improvisation here, but Mattel did nail the look.
The shirt thingy is a flexible plastic/rubber that sits well and thankfully is light enough to not get permanently bent up. Samurai is posed with his arm lifted in the package, which created a fold in the shoulder of the shirt. I was afraid I was going to have to run the figure under some hot water to get it back to normal but once I put the arm down it repositioned itself. 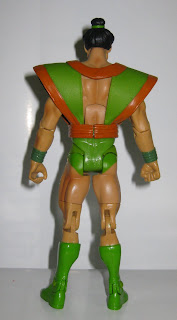 Design: Very simple but very accurate. Mattel captured Samurai’s stern countenance in a way we’ve never seen before and the paint detail is a big part of it.
The rest of the paint looks very good and is tight and accurate. The skin tones look great, which is important on a figure that is 70% naked. In addition to the flexibility of the shirt I was also relieved to note that there were no paint smudges on it. All too often it seems like the softer plastics or rubbers or whatever pick up bits of paint from other parts of the toys they are on. Not so here. 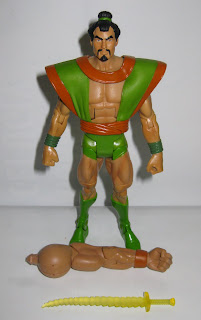 Accessories: Samurai includes a sword that appears to be made of lightning. It's not as bent as I thought it was going to be.  I’m not gonna lie – I don’t remember this thing. If I were Mattel I would have gone ahead and tooled a tornado that could be swapped with Samurai’s legs and also repurposed for a later Red Tornado update. At the very least they could have molded the old hand tornado that came with the Series 1Red Tornado in a different color.
Each Series 18 figure also comes with a piece of Apache Chief. 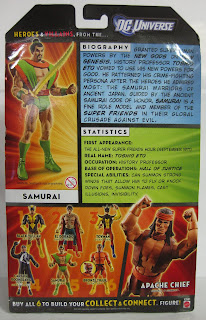 Packaging: The giant DCUC bubble with the character’s biography printed on the back.
I don’t think I ever knew Samurai’s origin, but it is awesome. I would love to see the character return in some form in the reboot. I hope his brief but impactful appearance in Brightest Day wasn’t the last we see of Professor Eto. 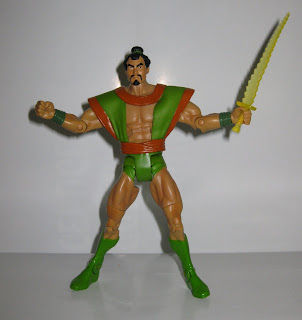 Overall: I love that I have a modern update on this character. I look at all of the Super Friends/Powers characters as fun bonuses in the line and am always happy to see them.
4 out of 5
Samurai loses a point for not having any kind of tornado accessory. I mean, that’s his thing. Other than that this is a neat figure. If you don’t want the Super Friends you can skip him because obviously you’re not going to be building Apache Chief, either.
I also want to be clear: it’s one thing if you just don’t want to buy these guys. I’m not saying everybody should love these characters. The people that bother me are the ones that deride them as being not real or less important than characters that originated in the comics and claim they shouldn’t even be made. That’s just asinine. I wonder if those people feel the same way about Harley Quinn.
Until next time, stay creepy
-Phantom
Posted by Phantom Troublemaker at 11:00:00 AM